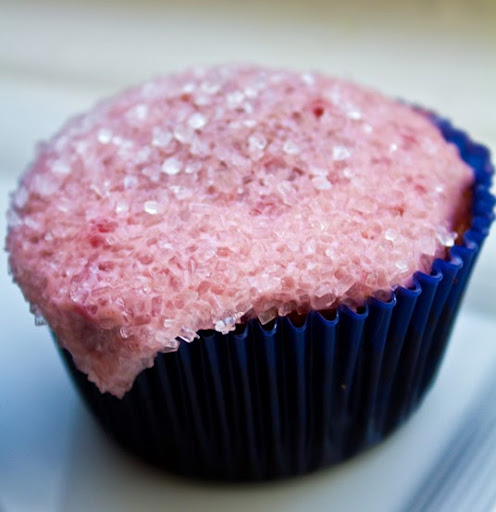 Broadway show over. Curtain down. Lights up. The crowd exhales. Back to planet earth. Hair blown way back.

Climbing out of a front row, I-can-touch-the-stage seat after a Broadway show is a rush. And it’s as close as I will ever get to experiencing the feeling of actually being on stage. So last Sunday when I was lucky enough to see Broadway’s Bloody Bloody Andrew Jackson (tag line: history just got all sexypants) from the front row, I was thrilled, to say the least.

And my post-show energy and inspiration turned out some killer cupcakes… In honor of the show I decided to make Bloody Bloody, no, sorry… Berry Berry Raspberry Glazed Cocoa Cupcakes. These are for you Mr. President Sexypants!… (UPDATED w/ a few new pics!!) 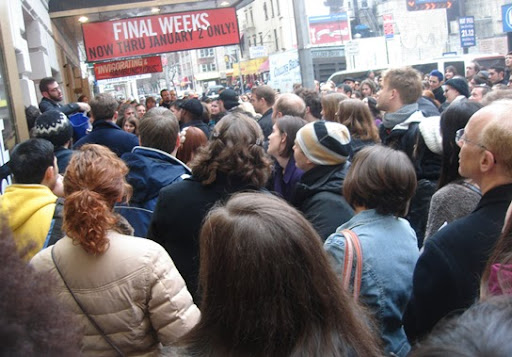 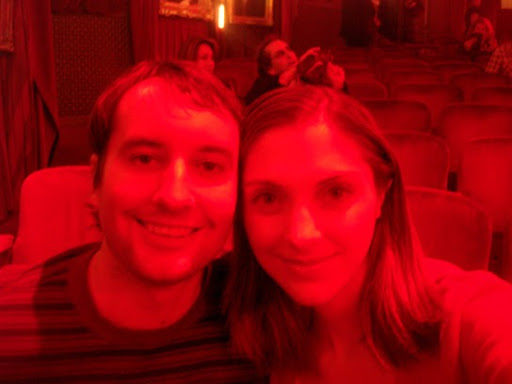 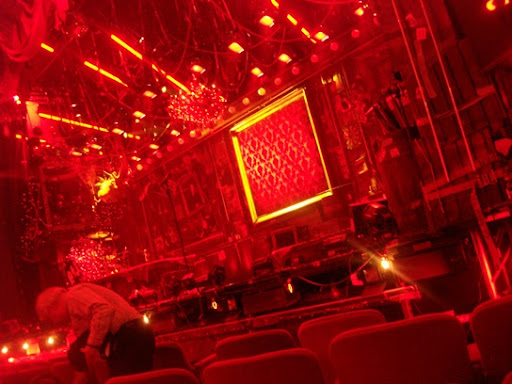 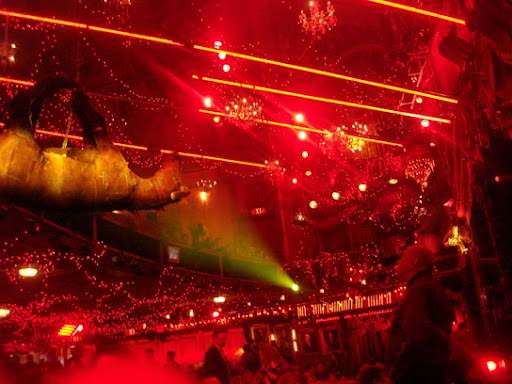 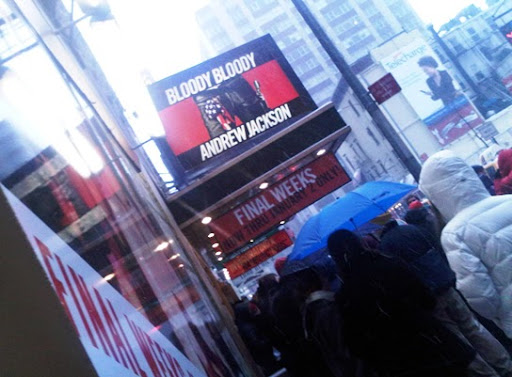 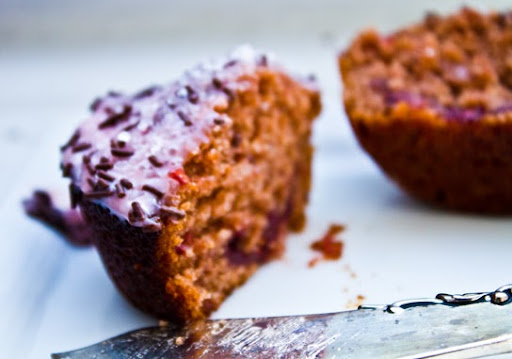 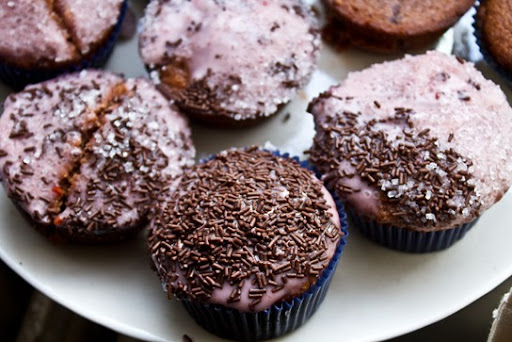 Inside, raspberry jam is a sweet surprise… 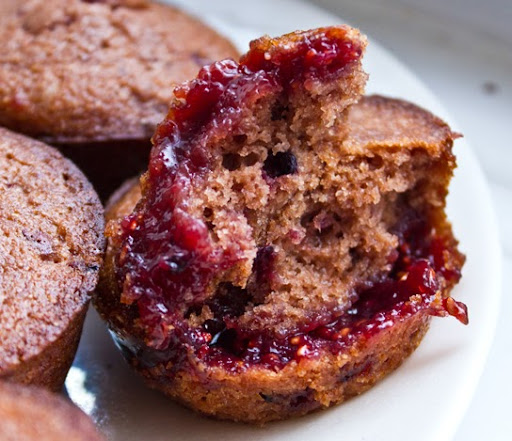 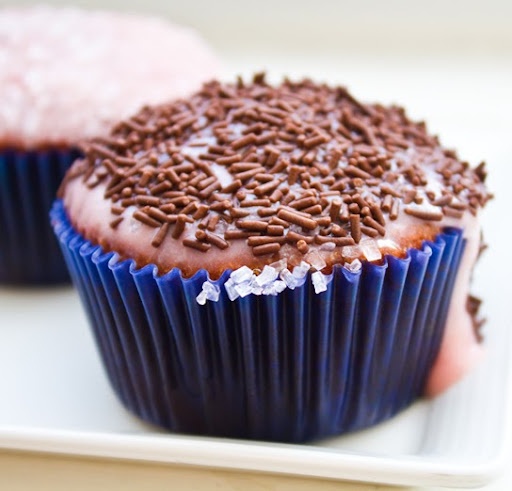 For me, there’s a story behind every recipe. Here’s this one!..

Have a Broadway Fling. Yes, you! There have been a few Broadway show’s that I have fallen in love with: Phantom, Billy Elliot, A Tale of Two Cities, Chicago (just to name a few). My most recent Broadway fling is Bloody Bloody Andrew Jackson.

..Now don’t let the name scare you off. There are no vampires, dull bloody war scenes or ‘history book’ style scripting about AJ, the 7th President of these United States. I won’t drone on and on about the spectacular lighting, witty scripting (my aching cheeks from laughing so hard) and genius casting. But I will say this: if you can catch the show before it closes on Jan 2nd. (boooo) Do it!

Benjamin Walker who plays the title character is pretty much perfect in this star-making roll.

I had already seen BBAJ from Mezz seats, but Front Row tickets meant it was my lucky day.

Theater-Lover. My post-show Facebook status. “Well that was fun.” That was all I could get out at the time. The show was energizing – yet exhausting to be so close to the stage action.

You can see the sweat dripping, hear the actors breathing after an intense scene, see the scuffs on the shoes, spit flying, the stage shaking during each gritty dance number and then there is that constant worry, “wait, I turned my cell phone off, right?!” I’ve heard rumors that President Andrew Jackson is not too fond of cell phones and even stopped mid-show to chew out a noisy cell owner. All in good fun of course…

Front row vs. Mezz tix in the BBAJ show… (but really, this theater doesn’t have a bad seat in the house!) 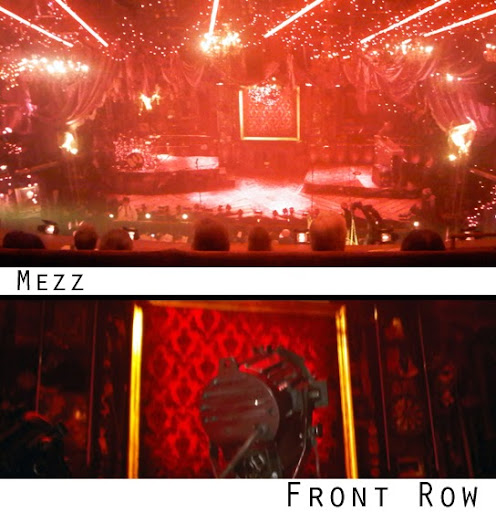 How-to, for Front Row Tickets. There are a few experiences in life I wish everyone could have. One of them is sitting front row for a Broadway show. And it’s easier than you think to do! You see many shows have something called a ticket lottery (some of them are only open to students, FYI) which occurs every show day, a few hours before curtain. These seats are considered “partial view” since you are so incredibly close to the stage. So yesterday my husband and I tried the lottery and won two front row tix for BBAJ (only $20 each!!) As one theater-goer said, IT WAS #EPIC. I agree. Here’s a taste via YouTube… 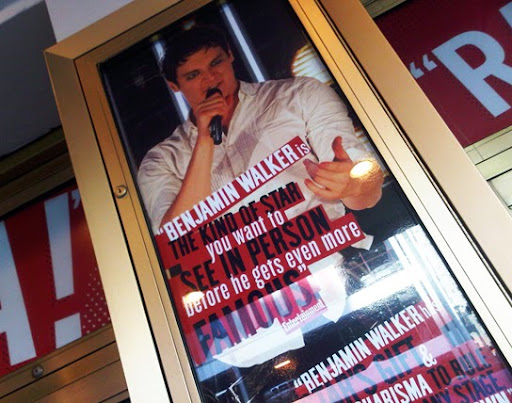 trying for lotto tix again. no luck! Glad I won once though!.. 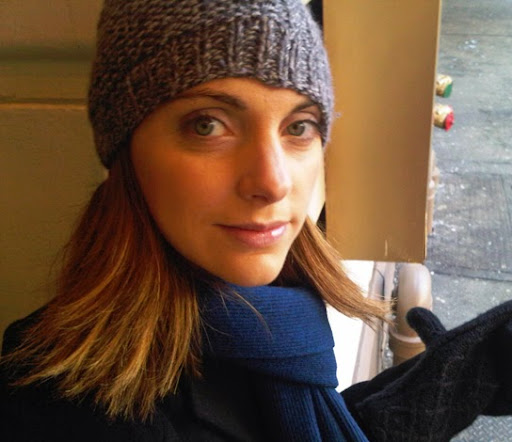 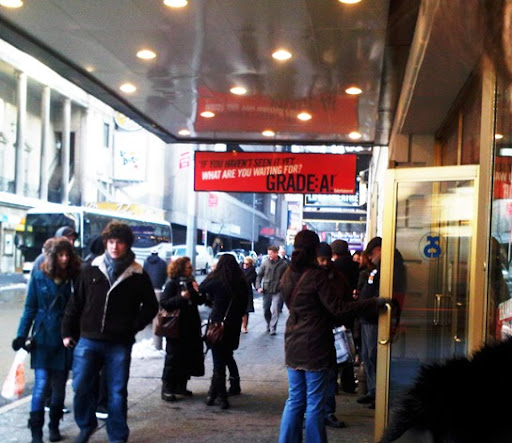 …ahh I just love theater. Gimme a Spotlight. I’m one of those girls: quiet, thoughtful, polite and introspective around new people. But stick me in a spotlight (in front of a camera, on stage, a microphone, on a soapbox..) and I burst into animated, dramatic, “where’s-my-spotlight?” bliss. Showtime.

The show transported me. I can’t even imagine the intense high the actors must feel after each performance. How do they come down from that??

Not Broadway-Bound? Try Regional Theater. I know everyone can’t make it out to NYC to get the true Broadway experience. So don’t forget to embrace those regional shows that stroll into town! Many of them were born on Broadway stages!

..So home from the adrenaline-boosting show, I had to do something to chill out. So I baked! In staying with the Bloody Bloody theme, I decided to make Berry Berry Raspberry Glazed Cocoa Cupcakes. Red raspberries oozing throughout. And I give a big Berry Berry Cupcake toast to the cast of BBAJ. Bravo. Standing ovation to you all.

Notes:
* I used sweetened cocoa powder in first batch, but second try I used unsweetened and though they were better that way. ..Do you want a sweeter cupcake or not?
* I really enjoyed the dash of cayenne in the frosting. You can remove it if you don’t like spicy-sweet flavors.
* If you want these cupcakes extra “red” “berry” you can add in a few drops of food coloring to the frosting. I just decided to keep them pink and light though.
* You could easily replace all the raspberry jam references with another red fruit jam: cherry or strawberry or even cranberry.

1. First, I prepared the frosting. For extra-fluffy frosting use a beater. Otherwise, simply whip very well with your spoon. Set in fridge to chill.

2. Preheat oven to 375 and line/oil your cupcake tins. Mix up your batter.

3. Pour one Tbsp of batter into each tin. Then follow with a dollop (about 1 tsp) of red raspberry jam. Then cover the jam with another heaping Tbsp of batter.

4. Bake for 25 minutes (or until edges of cupcakes brown).

5. Cool cupcakes completely or overnight. Dip each cupcake in frosting them a bowl of sprinkles (optional). 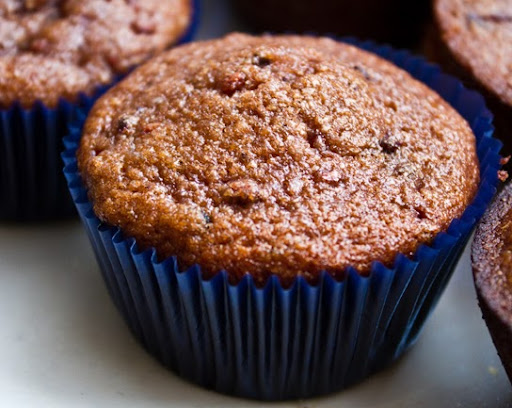 6. Serve or chill in fridge until served.

Serving Note: If you truly can’t wait to serve these cupcakes, you can easily coat the warm cupcakes in chilled frosting. This will create a melted glaze, but still be quite fabulous. 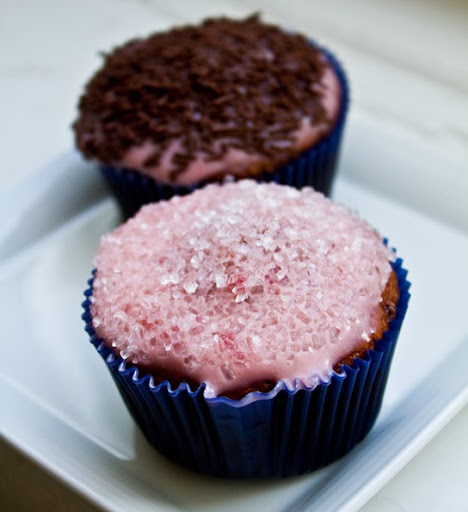 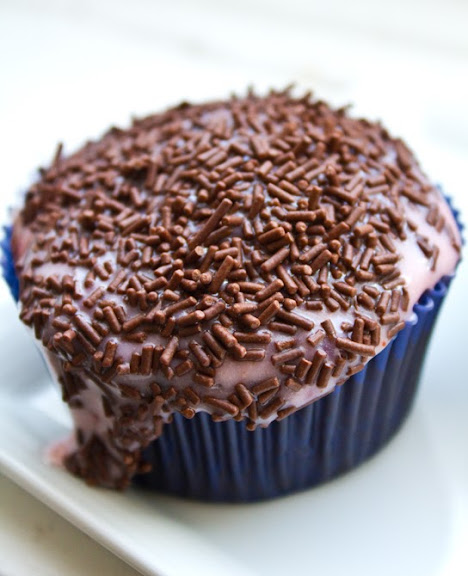 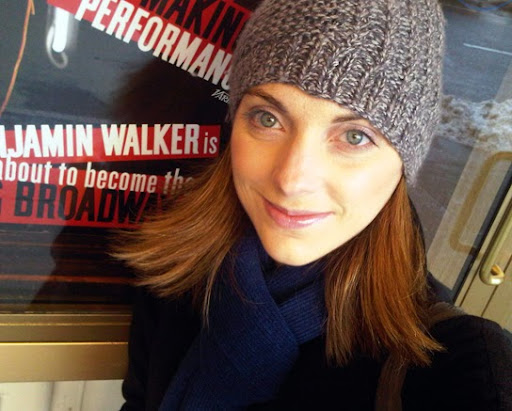 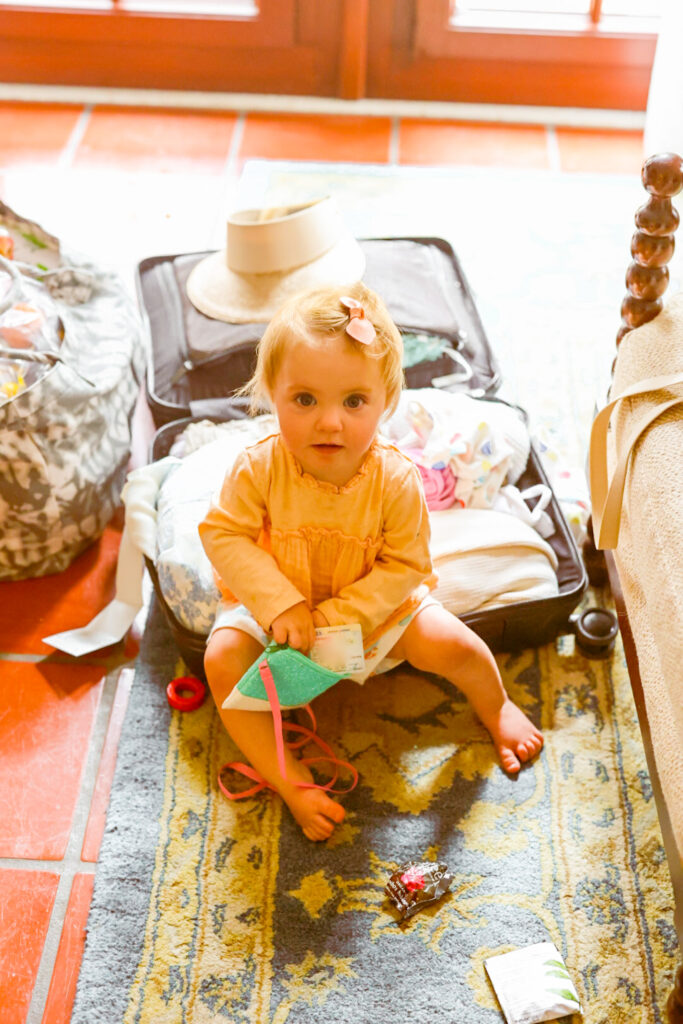 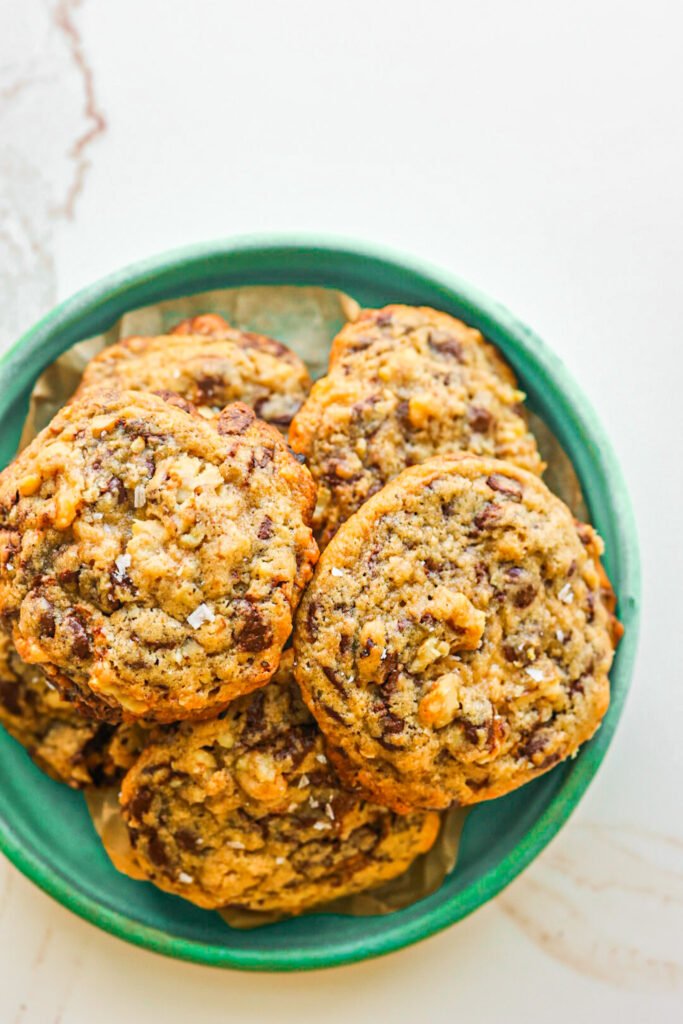 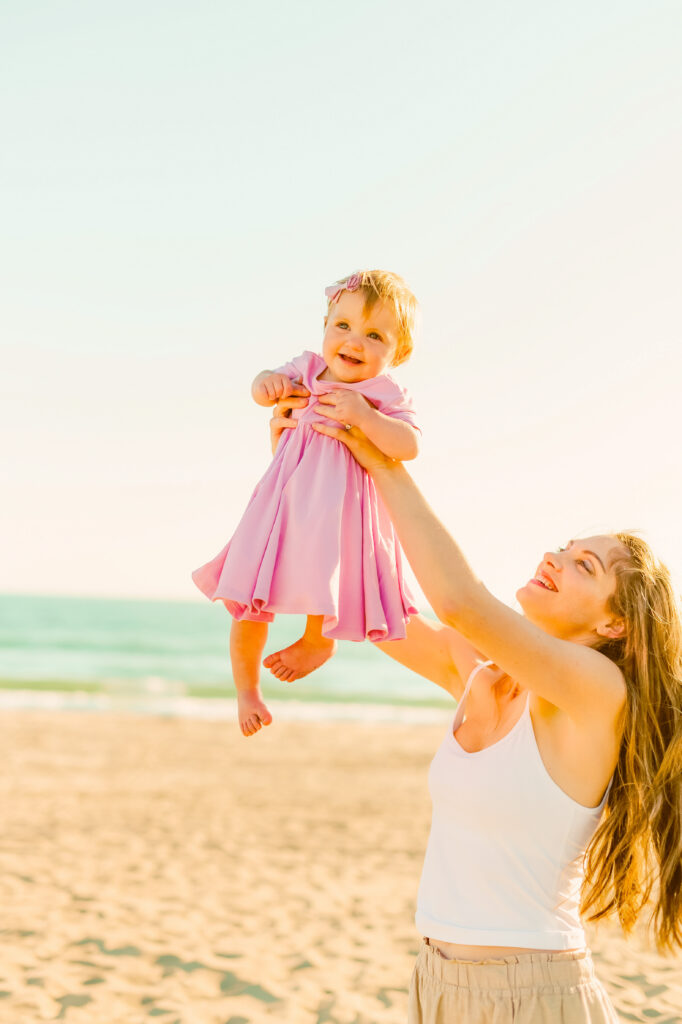 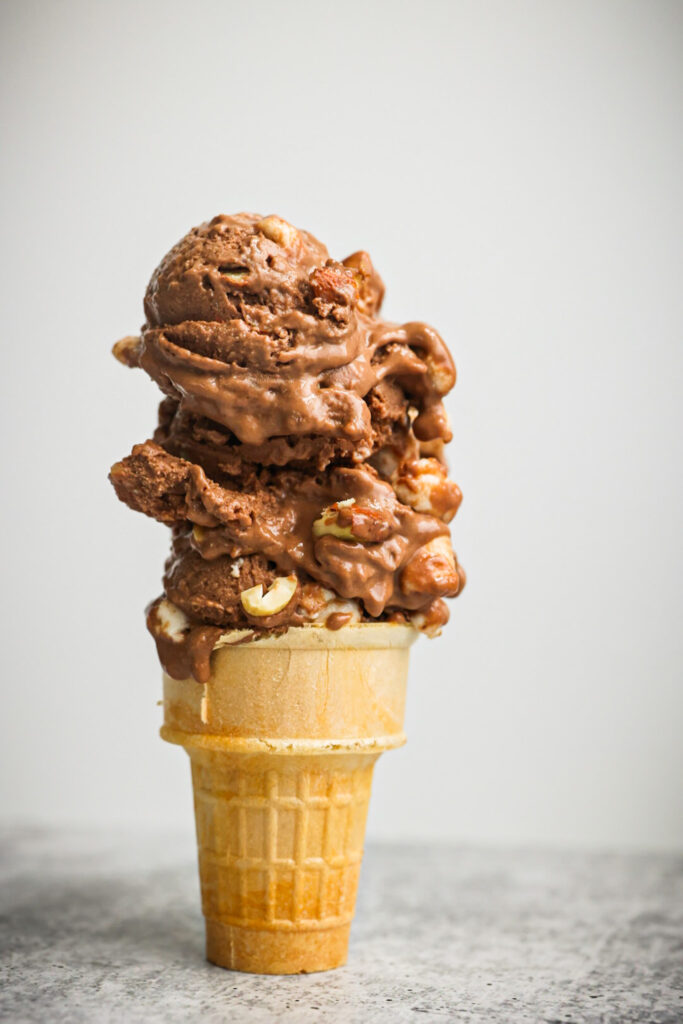