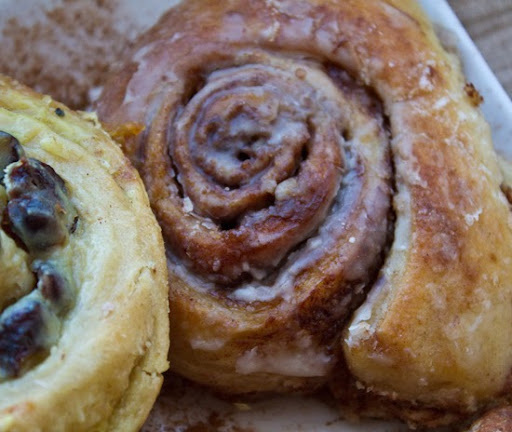 I’m a little sunburnt, a lot tired and incredibly satisfied by my long Labor Day weekend I spent gallivanting around NYC.

Labor Day Monday: US Open. But the #foodie highlight of my weekend had to be on Sunday – a crazy adventure all in name of NYC Food Trucks.

And one vegan food truck in particular: The Cinnamon Snail. 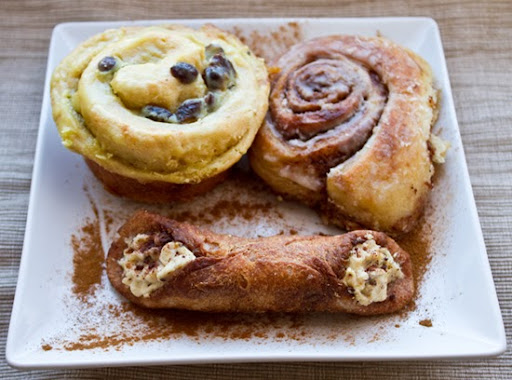 So here’s what we did in a “nutshell” – pun intended, as this story may sound a little nuts when I tell it aloud.

My two companions and I (“MrHHL” and BFF “S”) traveled via subway to the South Ferry Terminal, which is at the southern tip of Manhattan. We had to board the Governor’s Island Ferry to get to Governor’s Island where the Bklyn Yard sponsored, “Parked” Food Truck event was being held.

We arrived to the South Ferry Terminal at around 12:45pm. We thought we were early. Smooth travels for us, right? Wrong. Hundreds of other food truck fans had the exact same thought. The line was insane (and this was simply to board the Ferry.)

We waited and waited. “They should have the food trucks out by this line!” We laughed. Tummies growling. Maybe I should’ve eaten breakfast, I thought to myself. Darn.

Eventually, and quicker than I imagined, we boarded the Ferry to Governor’s Island (a 10 minute ride). The boat was packed. Who knew Food Trucks were so popular? Hmm. I’ll blame Food Network and NYC foodies for evolving the trend. 🙂

Fresh off the Ferry.. 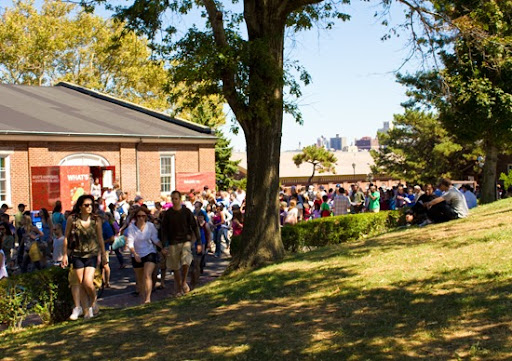 Off the Ferry. Yay, we’re free! Grass, trees, blue sky, crisp breezes, sun, crowds. Huge crowds. We trekked across the island with the other hungry masses. It was like the pioneers crossing the desert in search of an oasis.

Trekking across the island… 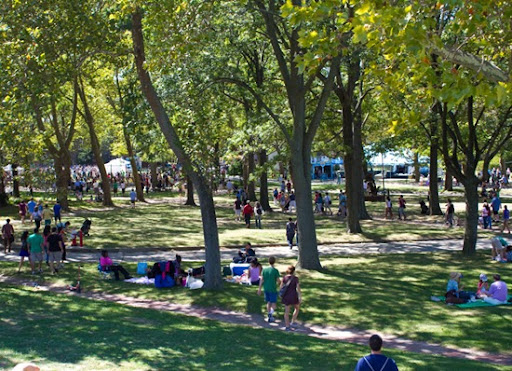 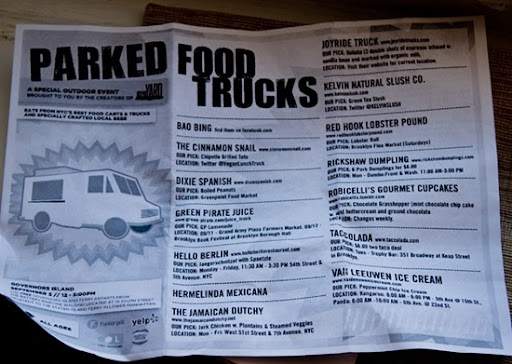 About 14+/- Food Trucks at the event. That’s like one food truck per hundred-ba-zillion people. Or so it appeared by the look of the lines! In the background, loud, harsh, not-so-great music was blaring on speakers. Was this a good idea? Should we leave? We decided to brave this foodie storm and navigate the long swirling truck lines snaking around the field. Oh. My. Goodness. 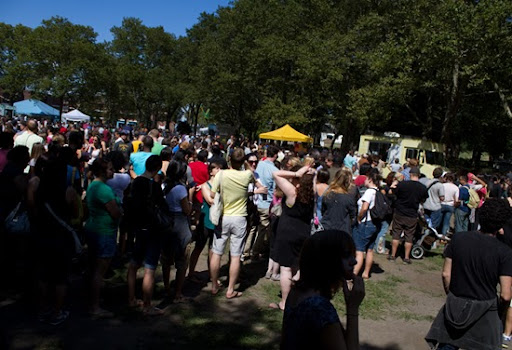 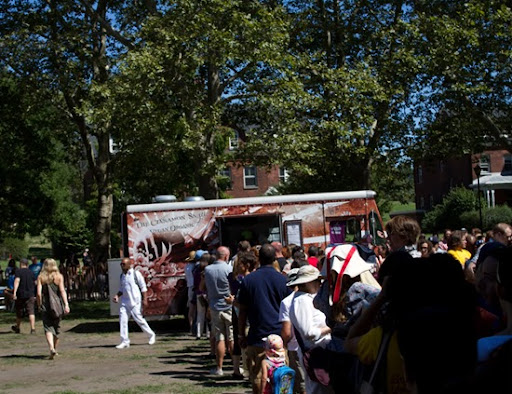 Then I saw the line. *Frowny face*

The Cinnamon Snail is a vegan/organic Food Truck that is usually parked in New Jersey – which is why I was very anxious to give it a try (I’m not in NJ all that often.)

The Line. It took us a few minutes to find the end of the Cinnamon Snail line. Getting in the “wrong line” would’ve been a disaster.

My two pals and I waited in line. After five minutes of moving a quarter inch, we realized that this would be a long wait. But really, what choice did we have? None! At least we weren’t alone.

I saw this “V” in the sky and I knew everything would turn out OK!… 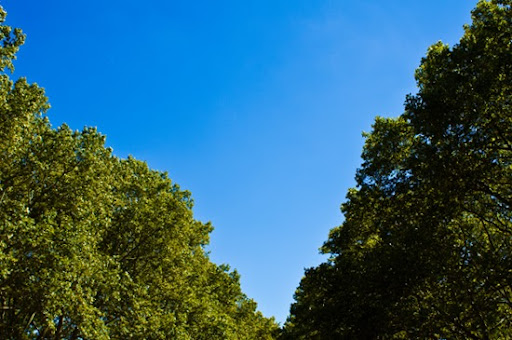 For a “Food Event” it was crazy how many people were roaming around the event with blank “starved” looks on their faces. The only food in most people’s hands were random cupcakes from some food table and tall frosty cups of Kelvin Slushees. (The fastest line at the event). 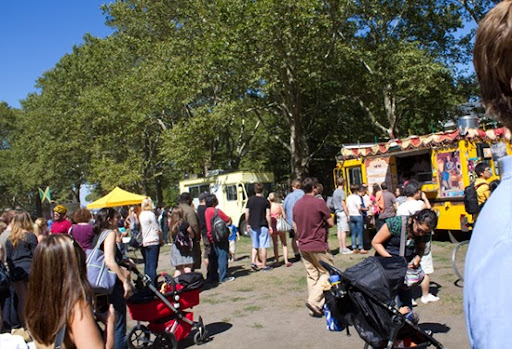 “Wow, this Cinnamon Snail line is moving like a … snail” I tweeted. 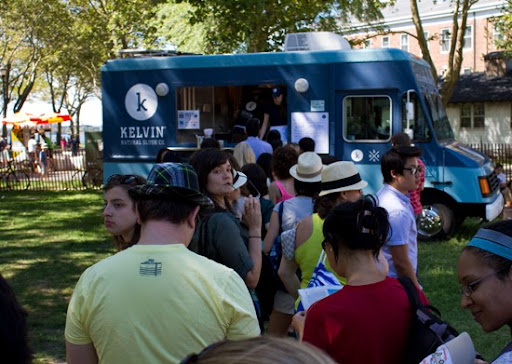 High Point: Somewhere along the wait my genius friend went to get us Kelvin Slushees. All natural. Vegan. I slurped my Ginger-White-Peach bevie down very quickly.

Brain Freeze. But I felt a bit less grumpy.

As we waited, the Cinnamon Snail began running out of food. Uh-oh. The special: sold out. Tofu: gone. Root Beer: none left. Spelt bread: out. Yikes.

Oh, and did I mention the several random food safety inspections at the trucks that stalled production for a few minutes. More drama.

Total Wait Time: around 1 hour and 45 minutes. In the sun. The hot sun. Hungry tummies.

We finally arrived at the Cinnamon Snail window where we were greeted by the very startlingly cheerful and vibrant workers. Only two of them running the entire truck. That’s hardcore. We gave them a big smile and begged them for food.

The guy in the green hat – running the show… 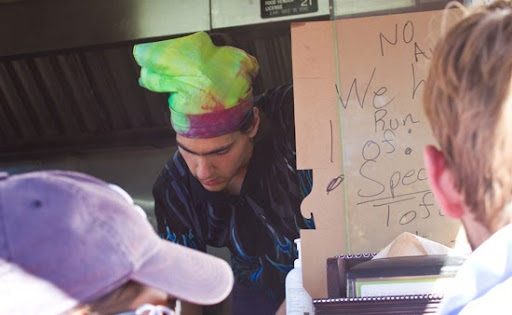 Lucky us. We ordered the last order of hot food before they ran out. As we paid, the truck guy (sorry I don’t even know his name!) shouted something like this to the line: “We are out of hot food! Only baked goods items left!” 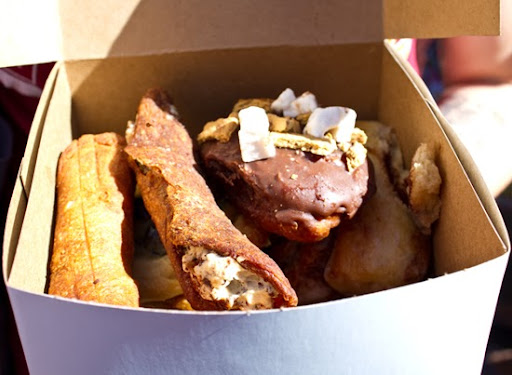 Note: there was a very long line of hungry tummies behind us before the truck closed it’s hot food service. I felt kinda bad, but mostly very very lucky.

$$$ ..and FYI, the super-cool Cinna-Snail guys actually gave back some money to the last few customers because they felt their dishes weren’t completely perfect (out of a few ingredients, etc) How cool is that?!

We ate our food under a tree. A shady tree. It was good. Delicious actually. We went back on the Ferry (after waiting in the long back-to-Manhattan Ferry line).

Back on the Ferry… 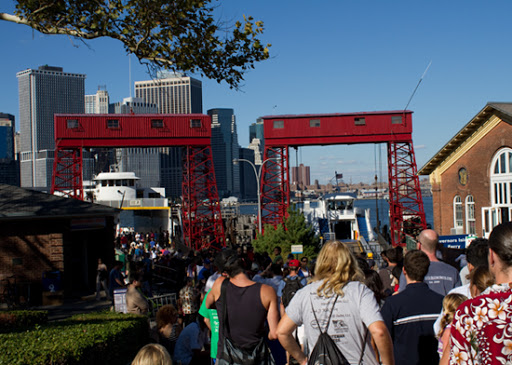 “Life is a journey, not a destination.”
— Ralph Waldo Emerson

Would I do it again? No.

Do I want to eat at the Cinnamon Snail again? Yes! But not at a massive Food Truck event.

We ordered: Two Portobello Sandwiches and one Fiery Tempeh Wrap. And bakery treats/goodies.

The Review: Both entrees were amazing. And under this circus-like atmosphere I was shocked by the high quality deliciousness. My tempeh wrap was stuffed with sticky, sweet, spicy tempeh and amazing lightly cooked kale. 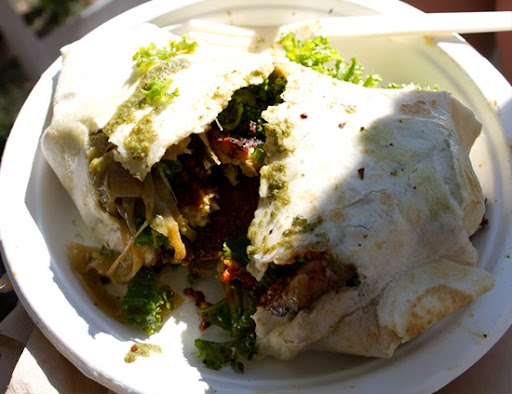 The portobello sandwiches were juicy, flavorful and bold. Delicious… 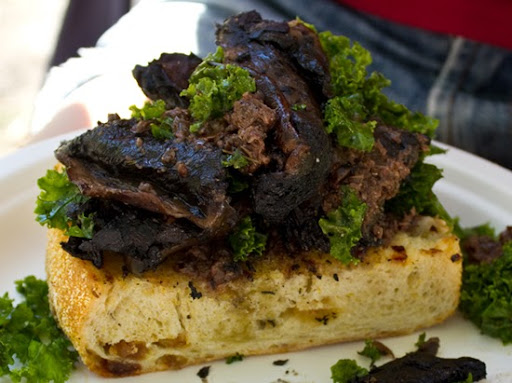 We felt much better after our meal.

The Pastries: We ordered a vegan cannoli, cinnamon snails (buns), a cranberry-lemon cinnamon snail and a vegan smores doughnut. All were pretty darn good. Loved them. 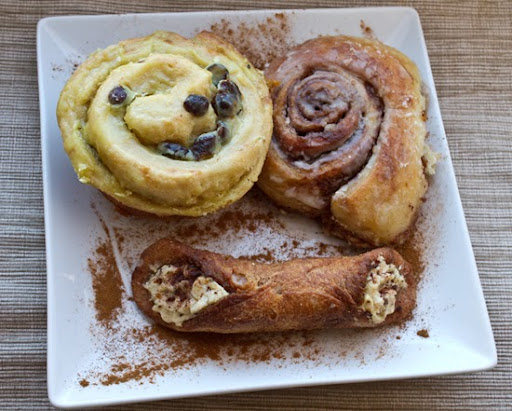 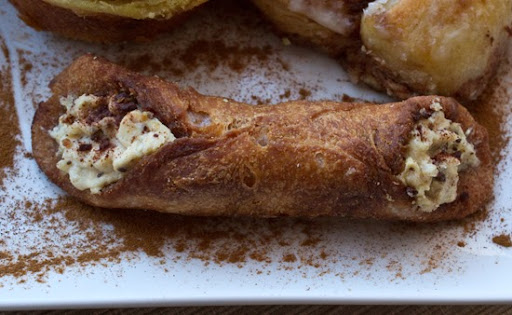 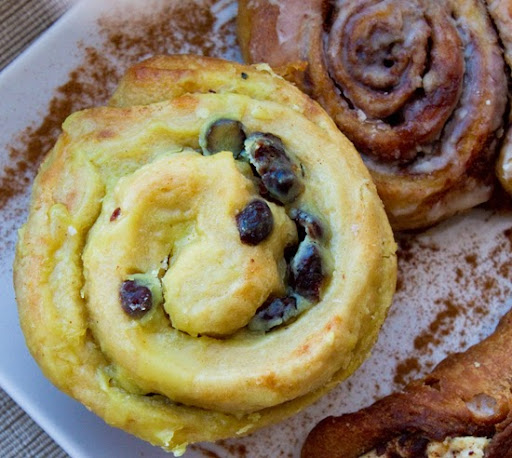 The other Food Truck we tried, simply because the line was one of the fastest (at around 20-30 minutes), was Kelvin all natural slushees. I loved these! Super fun and yummy.

First you select a base: ginger, tea or citrus.

Then you add another flavor such as basil, mint, white peach, raspberry, guava, strawberry and more.

I chose a ginger/white peach. Sooo good! Especially when you are waiting in a long line in the blazing hot sun and haven’t eaten anything all day. 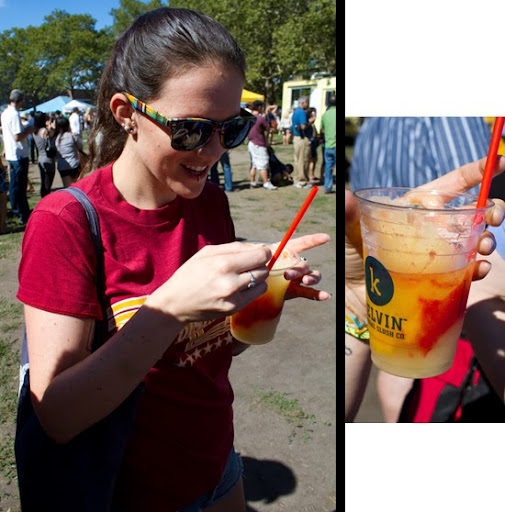 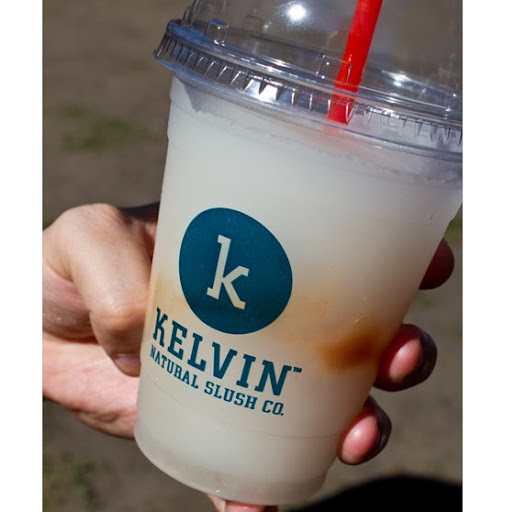 The Moral of the Story, Kids..

As we sat there under the shady trees with our plates of hot vegan food, surrounded by streaming, mile-long lines around the park all I could utter out of my mouth as we smiled and ate was,

“Thank goodness this is delicious!” My eyes wide and my stomach happy.

We did it! Smile in tact… 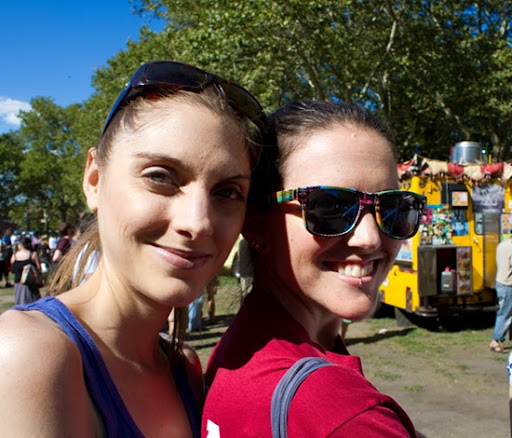 Why I Love Food Trucks: Food Trucks are special. They ‘even the field’ of culinary critique. Nothing matters but the food. No chairs, no dining room, no storefront. No waiters, no atmosphere. Just the food.

I heard one event attendee say, “No I don’t want Curry Truck. All I want is good, healthy vegan food. I want the vegan food.” I love that.

..In a land of mile-long, 2-hour wait lines one thing remains true: choose wisely. You only get one shot.

I chose vegan. And I was very very happy. Just like everyday that I choose vegan.

I love the Cinna Snail Tee.. 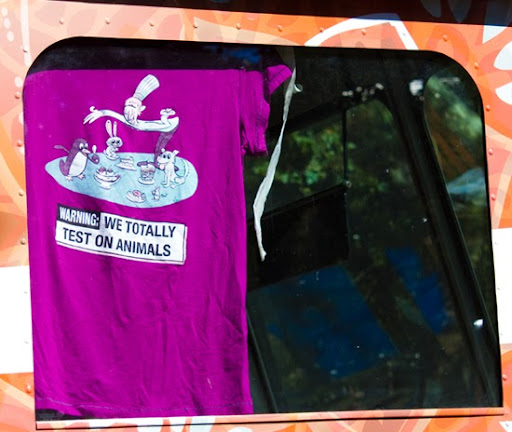 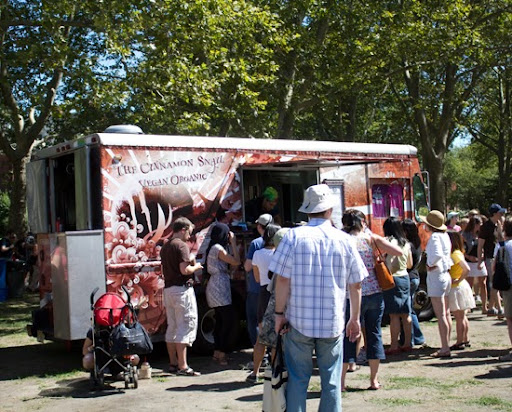