Home » This and That » Angry Birds Vegan Pizzas 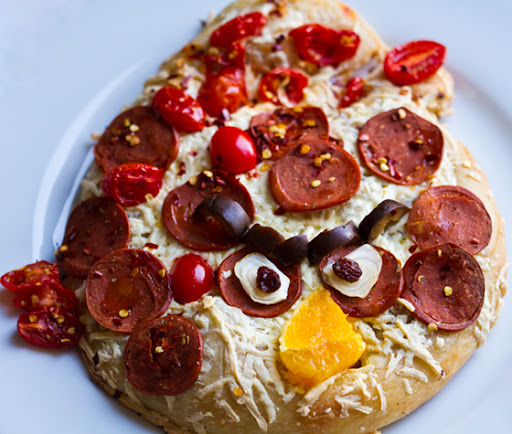 Last week on Babble’s Family Kitchen I shared my recipe for Angry Birds Vegan Mini Pizzas. This vegan cheesy, soy pepperoni-topped pizza is my kids-of-all-ages-friendly interpretation of the uber popular iPhone App, Angry Birds. Get my recipe and see why I’m giddy about red bird – but yellow bird didn’t turn out as well.

Full disclosure, I’ve never played Angry Birds – I don’t have an iPhone. But I do admit that the cute angry wingless birds are super fun looking. I mean they have to be to come in second right after Facebook for most popular iPhone Apps of 2010. So I googled “Angry Birds” – a pop culture trend – and see what all the fuss was about.

From the Angry Birds Wikipedia page:

“In the game, players use a slingshot to launch birds at pigs stationed on or within various structures, with the intent of destroying all the pigs on the playfield.”

..wow. Slingshotting wingless birds to attack pigs? Crazy kids today! Well, then again, when I was a kid I enjoyed playing a video game where two plumbers named Mario and Luigi would run through the sewer system trying to save a princess – eating magic mushrooms all the way. Then there was another video game where teenage turtles (mutant turtles) would karate chop a big rat and sling pizzas at other enemies. ..kinda makes Angry Birds seem normal!