Home » This and That » Chow Down Film: Go Vegan, Reverse Heart Disease. 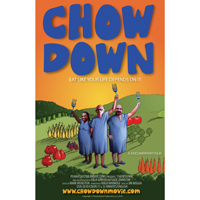 The film Chow Down shows how heart disease, even in its late stages, can be reversed by adhering to a plant-based diet (aka, vegan diet).

Last night I was lucky to attend a screening of the new documentary film Chow Down.

The event, held at the Tribeca Grand Hotel, also included a post-screening Q&A featuring an inspiring panel of guests. (Including Gene Baur, Alex Jamieson, and more). Check out my review of the film and a few of my favorite quotes from the evening
.. (and even watch the film for yourself!!)..

..The panel was fabulous! Each speaker had something inspiring and passionate to say and I walked away feeling incredibly empowered for living a vegan lifestyle and promoting delicious vegan recipes here on my blog! (a few quotes from the panel at end of post)

Guest panelist Alex Jamieson was one of my Veggie Girl Power ladies – so it was quite wonderful to finally meet her face-to-face during the cocktail hour.
-> don’t miss Alex’s Red Hot Heart’s Tele-Course for women’s weight loss and cardiovascular health! (only 8 spots left as of this AM) Full details/sign-up here.

My view from the back row, Gene Baur speaking post-film.. 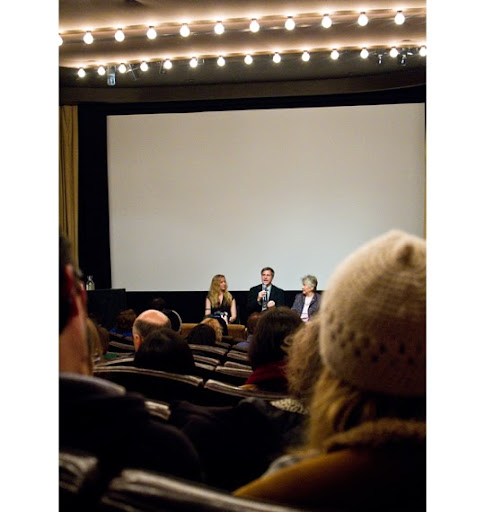 My Thoughts on Chow Down: Chow Down’s main topic is one that all Americans are familiar with: heart disease. So it immediately struck a chord in me since I know and love many people who have been affected – as most Americans do.

The end results of the plant-based study done on heart disease patients may not be shocking to me, but will definitely be eye-opening for mainstream Americans who may not be convinced about the connection that heart disease has with diet. Diet is more important than genes – because as the film states: “genes are like the gun, but diet is like the trigger.”

There is also a memorable scene where a former USDA employee tells her story of being lured to a five star hotel room in Washington DC and offered a briefcase of $60,000 cash to not mention the word “cancer” on a new Red Cross label. She of course did not accept the offer – but it certainly leaves my mind spinning about what else goes on in between food industry lobbyists and the USDA.

Also, it was eye-opening for me to remember that the “Food Pyramid” ..you know the one with 6-11 servings of “wheat” at the bottom (largest) level, was actually invented in the 1970’s! Funny how it seems that America’s obesity rates seemed to skyrocket just a few decades later – after eating from the “Food Pyramid” that I grew up coloring with crayons in second grade and was told by every health teacher in school that “this is how you are supposed to eat” ....I think it’s time to evolve.

So yes, I greatly enjoyed the film. I hope the film’s message reaches a wide audience. There are many eye-opening facts about heart disease in the film, so check it out for yourself on Hulu!..

Watch Chow Down Now on Hulu!..

Panel Speaker Quotes. I also live-tweeted the event to track my fave quotes from the panel speakers. I’ve moved those tweets here for you to view:

“(I have no animal product craving) try sea veggies …and thank god chocolate is vegan!!” – @alexnutrition on vegan cravings.

“I sooo agree.. “I crave quinoa and kale as loserish as that sounds!”” – MPD @ecorazzi on vegan cravings.

“If u don’t have to kill animals to survive, its an inherently violent act” – @genebaur on “humane” animal farming

“Ha!.. “Save a straw, save an elephant. It all has a connection!” [email protected] co-founder

“..read the ingredients. if it doesn’t sound like food, it ain’t food.” – @naturalgourmet founder

Chow Down will make its nationwide debut with the DVD premiere on July
27th, by Virgil Films & Entertainment, and includes the bonus features: Extended
Interviews, Extended Scenes, and a Healthy Recipe from Dr. Caldwell Esselstyn,
MD.

Directed by Julia Grayer and Gage Johnston, Chow Down presents smart savvy
preventions for today’s most critical cases, in order to kick the disease and
maintain a healthy lifestyle. With only moderate changes, simple food choices
and the help of expert leading advice, viewers can fight back and reduce the risk
of heart disease. 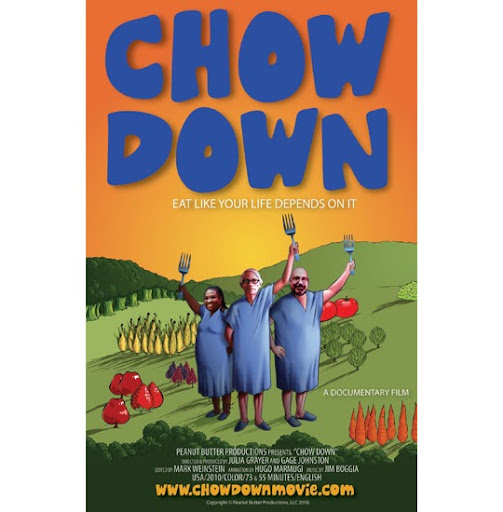