Home » This and That » Ghent, Belgium’s “Veggie Day” is Once a Week. 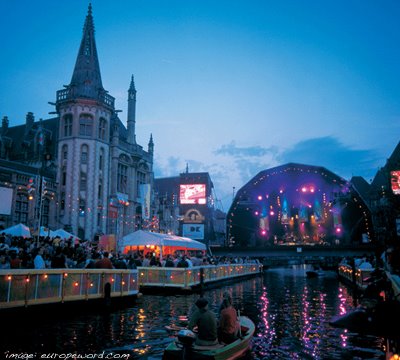 Most schools, offices or cities will practice a “veggie day” or “Meatless Monday” once a month or once a year. But the BBC reports that one city in Belgium has taken it to the next level by announcing an official “veggie day” to be practiced once a week…

Travel Side Note: The photo above is of the Ghent Belgium Festival, the Ghent Festival, it springs to life every July…so if you are in town or that side of the world, you might want to grab your veggie map and take a few days off…

The announcement: “Starting this week there will be a regular weekly meatless day, in which civil servants and elected councillors will opt for vegetarian meals.”

Ghent, Belgium Loves Vegetarians. Clearly Ghent is a veggie-lovers paradise. Not only do they publicly embrace the diet of vegetarianism, but they are practicing it as well. Promoting it. The city says that it is starting weekly “veggie days” because:
“Ghent means to recognise the impact of livestock on the environment. The UN says livestock is responsible for nearly one-fifth of global greenhouse gas emissions.”

“It is hoped the move will cut Ghent’s environmental footprint and help tackle obesity. Around 90,000 so-called “veggie street maps” are now being printed to help people find the city’s vegetarian eateries. “