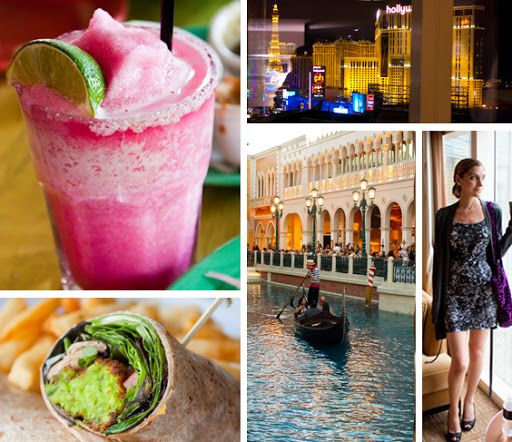 Back from my long weekend in Las Vegas, I can’t wait to share my summer travel fun with you all. I’m splitting my “Vegan in Vegas” adventure into two parts. Today is an overview of my trip (and all the vegan eats!) – and then I’m doing a separate post for one of the greatest meals I have ever had. Hint: it happened at The Wynn. Total vegan dining bliss.

Many of us hear about “vegan options in Vegas” – so I was excited to test out those options first hand. Get ready for some Vegas-style vegan dining, wellness, fun and beauty!

* Mandarin Oriental Hotel, Dining & Spa
Our home base for this trip. I couldn’t imagine a better oasis in Vegas!
* Vegan Dining at The Wynn
I’ll save my details for a separate post to come this week. Not to miss..
* Casual Vegan Dining: Pink Taco!
Surprised by how fabulous this spot was.

Vegas, Baby. My husband and I needed a quick adventure (long weekend trip) for our 5th wedding anniversary. Though we had been planning a long week in Italy for some time now – we had to postpone that trip since my kitty Nelly has been adjusting to her kitty diabetes/insulin. So we didn’t want to stay too long right now. (Ps, Nelly is doing great though!)

..So we chose a long weekend in Vegas.

We often hear about the vegan options in Vegas. But I wanted to see if I could really pull it off. Vegan in Vegas – without really trying? By going to all the mainstream spots. Could it be done? Find out…

The Hotel. We researched hotel options diligently. In the end, we couldn’t decide on The Wynn (for all its amazing vegan dining options, casino energy and beautiful rooms) or the Mandarin Oriental (since we were married at the MO in Miami – and know the rooms/spa/dining and service are always first rate).

We decided on the Mandarin Oriental. Other perks were that the MO hotel is smoke-free and doesn’t have an in-house casino. You may consider this a downside (I mean, it is Vegas) – but if you need to some energy all you have to do is walk across the street. Energy craving satisfied. But inside the Mandarin you are in a world of Zen. It is a true oasis. A calm from the Vegas storm.

To be honest, a half hour into our trip I wasn’t sure if the hotel was in fact too zen for our Vegas trip – but in the end I am beyond thrilled with our choice. Expectations were far exceeded. My fave points: breakfast by the calm pool, fresh fruit, soy lattes, a morning swim, an amazing spa to cure just about anything that ails you (and it’s just an elevator ride away) – plus the super friendly MO staff is always impressive. Hotel heaven. And the view from our room rocked too.. 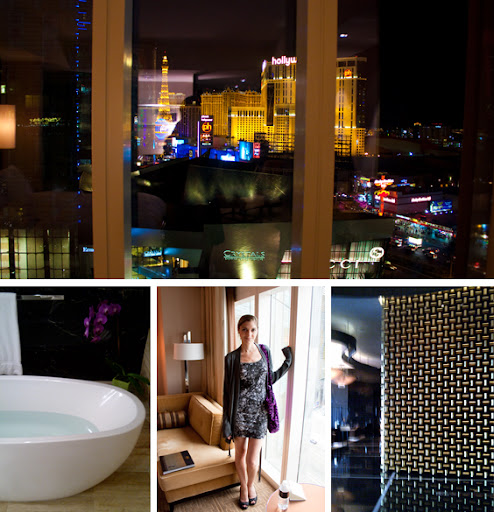 When we arrived at the MO we were starving. So we ordered room service. Though the Mandarin doesn’t have a plethora of vegan options apparent on the in-room dining menu – all you really have to do it ask. I ordered an amazing vegan salad, and some crispy perfect scallion pancakes. The perfect light meal since I was headed down to the spa later that evening.

Room Service at the Mandarin. Day one it was scallion pancakes and salad. The next day I has an amazing edamame falafel wrap. Watermelon juice shooters too… 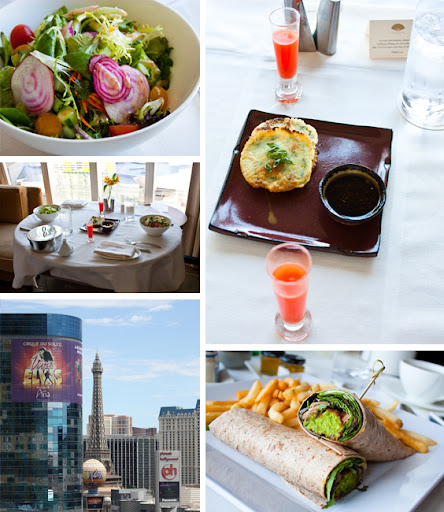 The spa at the Mandarin is insane. In a good way. I have been to several of the MO spas (New York, Miami, DC) and the Vegas spa is one of my faves. It’s huge for one thing. And the services were blissful. Employees: amazing. True, I can’t compare the spa to any other in Vegas – but I can’t imagine a better spa on the strip. I had the Jade Facial, Mani/Pedi and a Detoxifying Foot Treatment. All were heavenly.

That evening we decided to go out on the town – even though we were all “zenned out” – complete with oily spa hair – that’s a good thing by the way! My feet wanted to stay in cool spa slippers and lounge on the fluffy bed – but this is Vegas – and we only had a few evenings to experience it. So out we went..

On the Town. Night One. We trolled a few casinos. Had a drink at the sparkly pink Chandelier bar in the new Cosmopolitan Hotel, then settled on dinner at Blue Ribbon. So funny because Blue Ribbon Sushi in NYC is one of our favorite dining spots. I adore their veggie rolls, miso soup, hot sake, rice and veggie plates. The Vegas Blue Ribbon was pretty fabulous. My husband raved about his sushi. And I was pleased with my vegan eats. But after such a long day of travel and spa-ing we were both about to fall over and start snoring in our sake. So bed called. Exhausted, we walked home and plopped into bed.

Waking up in Vegas. The next morning I woke early (still on DC time) and hopped down to the pool. I enjoyed an amazing infinity lap pool/hot tub experience all to myself. Literally, there was only one other person at the pool this early. Loved that.

We ordered a light poolside breakfast. Soy lattes. A fresh fruit platter. A bagel with jam. Fresh orange juice. Lovely. Poolside relaxation complete. But eventually (by around noon) that Vegas sun knocks me out. So out and about through Vegas we went! Yay for AC. It’s so fun to peruse the various hotels and people watch. 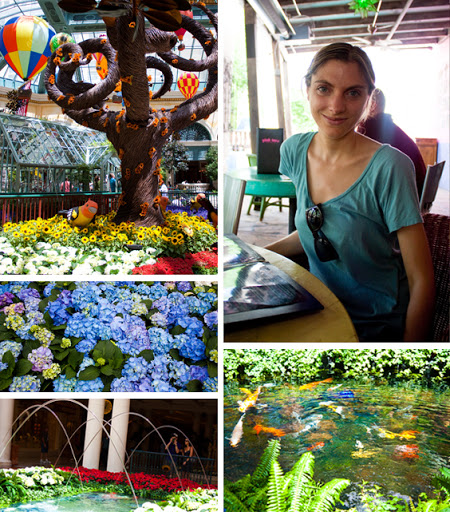 Later that day we somehow ended up at Hard Rock Hotel. I wanted to check it out so we took a cab there (it’s not on the strip). I was dying for Pink Taco eats and so that’s where we went.

Pink Taco Vegas. I was so impressed with this place. I love Pink Taco LA – so I hoped “Vegas” would be just as good. It was. We sat outside in the oddly humid heat and drank frosty bevies, listened to the thumping music from the nearby pool area and played with the chip-hungry birdies fluttering all around us. Our waitress was vegetarian so she was incredibly helpful. I had a huge vegan tostada, a prickly pear margarita, guac, salsas and a huge platter of grilled veggies complete with homemade corn tortillas. Yum!!.. 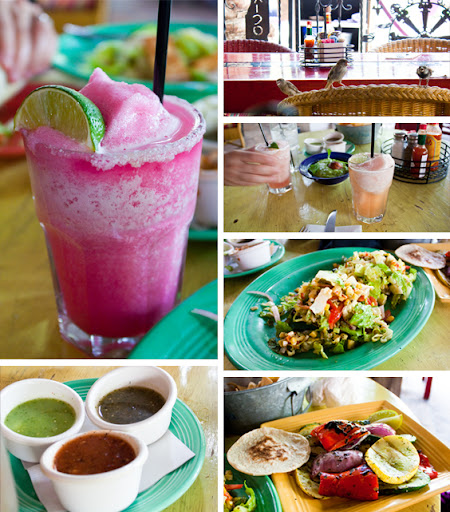 Later that night we went to Border Grill at Mandalay Bay. Sadly this place was not very good. I love, love, love the Border Grill in LA – but this one lacked energy and freshness to the food. Kinda a let down.

Along the way we also went to see the Phantom of the Opera Vegas Edition Show. I snagged front row center seats. It was a fun show with amazing special effects.

Also fun, we drove by the “Pawn Stars” spot. Anyone watch that show? I’m obsessed. There was a long line so we didn’t wait to go in. Still fun to see though.

Vegas is such a fun place. It’s like Disneyland for adults. And where else do you see signs that say “Margaritas to Go”.. 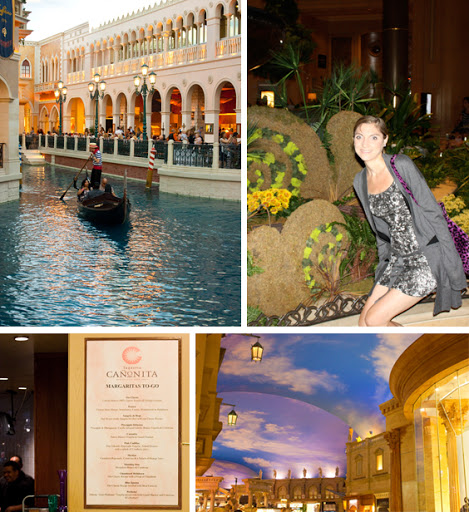 Come Saturday, we repeated our pool routine. And were even more “zenned” out than the day before. That’s a great thing when you are on vacation 🙂

And that night was our official anniversary dinner at The Wynn. But that evening was so amazing it deserves its own post! Stay tuned… 🙂

ps You guys tweeted/emailed me some advice including checking out Pura Vida Vegan restaurant or Ronald’s Donuts. I didn’t make to either spot – but funny enough, our limo driver (on our special anniversary night out) had heard great things about both spots – and had even visited Pura Vida. So next time I will have to squeeze those spots into my itinerary!