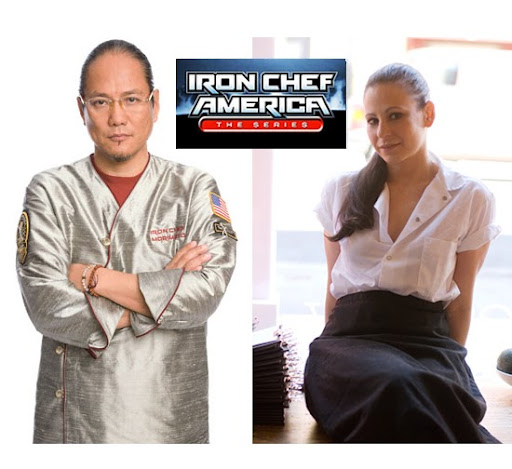 I was simply giddy when I heard the news that one of my fave vegetarian Chefs Amanda Cohen would be pitted in a head-to-head battle against Iron Chef Masaharu Morimoto on Iron Chef America. This will be the first ever vegetarian Chef battle on Food Network – and if anyone can give Morimoto a few nerves – it’s Chef Amanda!

Dirt Candy. Amanda Cohen is the Chef/Owner of Dirt Candy veg/vegan-friendly restaurant here in NYC. If you are in NYC, plan to snag reservations – you won’t regret it! Read my reviews on Dirt Candy dining here and here. Awesome vintage Veggie Girl Power interview with Amanda here. Now lets get back to the main event, I mean battle!

The Inside Iron Chef Scoop. I was dying to check in with Amanda to get the inside scoop on her iconic Iron Chef battle. So many questions! What is kitchen stadium like? Did she know the ingredient would be vegetarian? How was the intimidating ‘judges table’? Any mishaps in the kitchen?.. I asked. She answered. Read my interview with Amanda on her Iron Chef experience…

“They want you to walk into that stadium wide-eyed and innocent.” – Amanda on her Iron Chef battle.

My Interview with Amanda Cohen on her Iron Chef Battle vs. Morimoto.

Q1: How exciting that you are the first vegetarian restaurant to arrive for battle in Food Network’s kitchen stadium! Congrats! Was your vegetarian-Chef status just a coincidence – or was Food Network seeking out a veg-themed battle?

Amanda: I’m not privy to a lot of the decision-making at Food Network, and in fact I was pretty much in the dark about a lot of things that went on, which is the way they like it. They want you to walk into that stadium wide-eyed and innocent. However, if I had to give an opinion, I think they were looking for a vegetarian chef to spice up the battles. This is Season Five, after all, so they need good gimmicks to keep people watching.

Amanda: Masaharu Morimoto is the only Iron Chef to make it from the Japanese version of Iron Chef (which I love) to the American version and so I jumped at the chance to go up against him. Not a slight on anyone else, but to me he’s the real deal. I’ve actually bumped into him a few times after the taping he’s been very nice.

Q3: I know you can’t tell me the “secret ingredient” but were you assured ahead of time that it would be something vegetarian or was it “anything goes” ?

Amanda: I was assured it would be something I was comfortable working with.

Q4: Did Morimoto stick to a vegetarian menu as well or did he prepare traditional ‘Morimoto-esque’ fare? In other words, was this a VEG vs. VEG battle or not?

Amanda: I didn’t know anything ahead of time, but he did stick to a vegetarian menu, so it was vegetarian versus vegetarian.

Q5: You mentioned on your blog at DirtCandyNYC.com that you ‘trained’ for the Iron Chef competition. How industrious of you! What did this entail?

Amanda: We closed the restaurant once a week and tried to do timed cooking of meals based around various ingredients. A lot of it was about working closely together and working fast.

Q6: Iron Chef judges can be brutal – how was the judging session? And did you feel any sense of light discrimination because of your vegetarian Chef status?

Amanda: The judging was brutal and uncomfortable and most of the time I thought I was going to cry. It’s hard to stand there and have people pick apart what you’ve just worked hard on. As far as being discriminated against because of being a vegetarian…I wouldn’t say I was discriminated against, but my brand of vegetable cooking is full fat, and it’s fun and colorful and plays a lot of games and I’m not scared of using butter or frying food. This ran against some prejudices and assumptions the judges had about what they considered “proper” vegetarian cooking. But that’s normal – as soon as cooking vegetables steps out of the shadow of “health food” some self-appointed gatekeepers get all irritated that you’re being uppity.

Q7: You have such outstanding Dirt Candy desserts – did you choose to prepare a dessert dish during the battle as one of your 5 dishes? I hope so!

Q8: Did you give your Iron Chef dishes a “Dirt Candy” spin by infusing a few of your signature creations – such as your Candied Grapefruit Lollipops, Crispy Tofu, Portobello Mousse, Jalapeno Hush Puppies or Popcorn Pudding. (Yum, I’m making myself hungry!)

Amanda: It’s been a two-way street. Remember that Dirt Candy had been open for less than a year when I appeared on Iron Chef. So I used a lot of the techniques that I was just starting to experiment with at the restaurant on the show. That said, doing the show was huge for Dirt Candy. It had a big influence on the menu going forward, and a lot of the dishes we would up making on the show became part of the Dirt Candy bag of tricks.

Q9: Any specific memorable moments you care to share or care to forget?

Amanda: My pants fell down at one point, which is always embarrassing and I can only hope that this moment didn’t make it onto national TV. Also, the worst thing was that, like an idiot, I grated my finger and the producers insisted on applying a band aid. It kept getting wet and coming off, and they kept making me reapply it for continuity. I think we ran through a box of them.

Q10: Was your Iron Chef experience easier or harder than you had anticipated?

Amanda: We were well prepared for what we were doing, but nothing prepares you for being on the show. Jesus, Danielle and I are a tight team, and we’d been training so in terms of cooking we were like the vegetable SWAT team. But then you walk into the freezing cold studio, there are lights, camera people, people shouting questions at you, you’re using a kitchen and kitchen equipment that you’ve never used before and it’s all a bunch of stress. The Iron Chefs definitely have an advantage in the sense that they’re familiar with the studio kitchen and with the process of how the show works.

Q11: Being the first vegetarian restaurant to battle on Iron Chef is quite a milestone (especially when you consider past battles featuring outrageous non-veg secret ingredients such as organ meat, live lobsters and Elk) Do you think this move on Food Network’s part suggests a shift towards embracing on-air/in-print recipes, personalities and shows that are vegetarian and even vegan-friendly?

Q12: Off Topic…speaking of the Portobello Mousse in question 8 – congratulations on winning PETA’s $10,000 Fine Faux Foie Gras Challenge! What sparked you to enter and what kind of feedback have you received from the “Chef Community” ?

Amanda: I entered because Sarah DiGregorio over at the Village Voice did a write-in nomination for me in the PETA contest and I read her blog post and thought, “Why not?”
http://blogs.villagevoice.com/forkintheroad/archives/2009/01/peta_obsessed_w.php

As far as feedback, Pamela Anderson mentioned me in print so that’s something, right?

Be sure to catch Amanda’s Iron Chef episode when it airs on Food Network:

And if your in NYC – come to the Iron Chef viewing party! Shake Amanda’s hand and tell her in-person how much she rocks. Details on Amanda’s Dirt Candy blog (which might I add is an absolutely fabulous, fun and entertaining read.)

..I’d also tell you about the Iron Chef Dinner Amanda is putting on at Dirt Candy where she re-creates the Iron Chef dishes… but it sold out in a nanosecond. 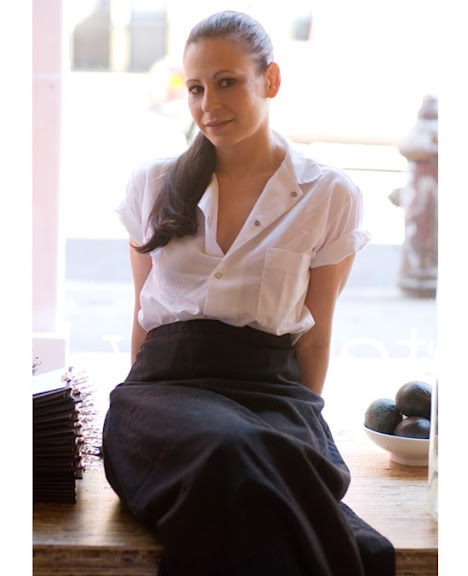 Just for Fun… check out all the Iron Chef ingredients EVER! Not so many veg secret ingredients huh?..