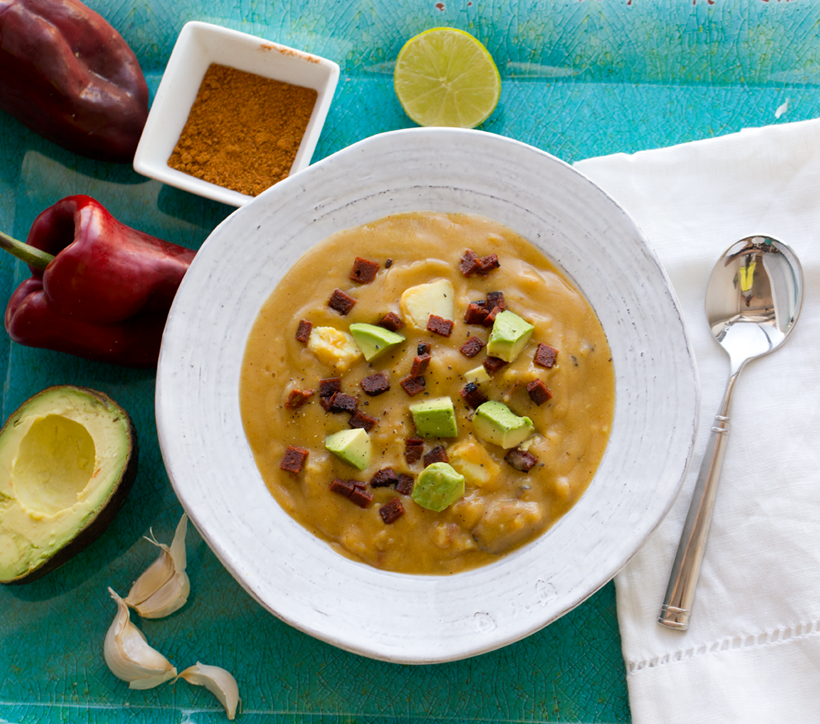 You know the cliché of licking the bowl when you make a fluffy, yummy cupcake frosting? Well, I have hit a new mark when it comes to bowl-scraping goodness. This soup. Along with spoon scraping every last drop of this soup, I was dancing around my kitchen singing, “Best soup ever. Best soup ev-errrrrrr.” My husband, who actually chose to have leftover spaghetti and meatless balls instead of this soup wasn’t in on my soup-satisfaction. But I can guarantee you that when I serve him a bowl tonight, he will be dancing along with me.

The Best Creamy Potato Soup. Rich and silky, creamy and luscious. Spicy, kinda cheezy, and lovingly smoky, with an accent of sweetness somewhere underneath all those rich, bold savory layers. But really, it is all about the texture. This classic thick, velvety, creamy potato texture that doesn’t come from just a quick heat and serve method. You slowly simmer this soup to let the starchiness from the potatoes mingle with the cauliflower and spices and wait for the soup magic to happen. I hope you try this soup and do a soup-happy dance in your kitchen as well.. 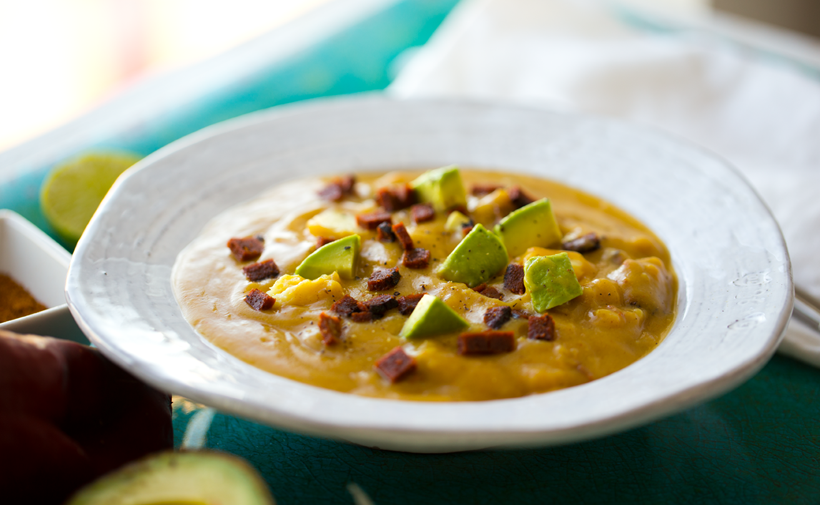 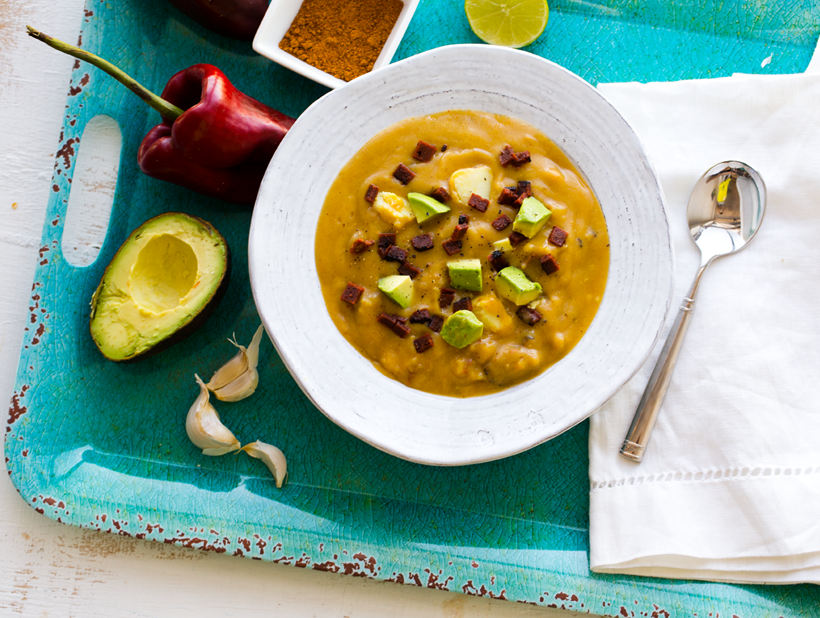 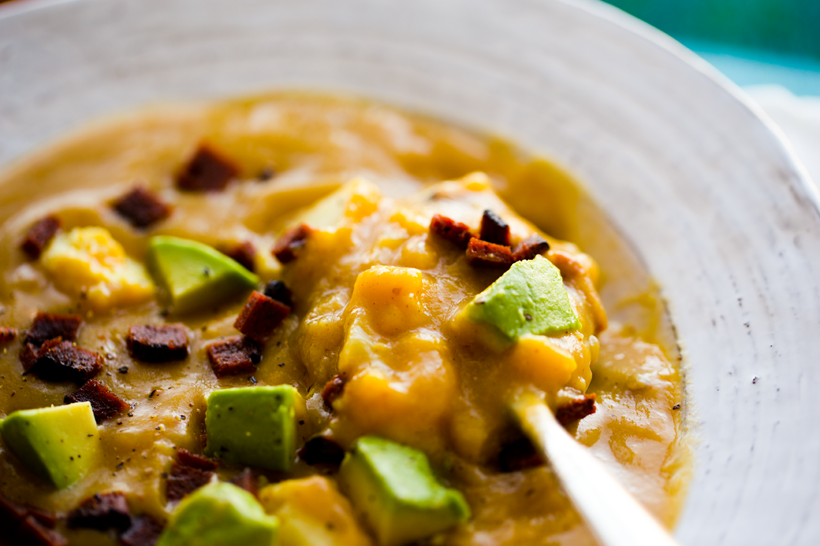 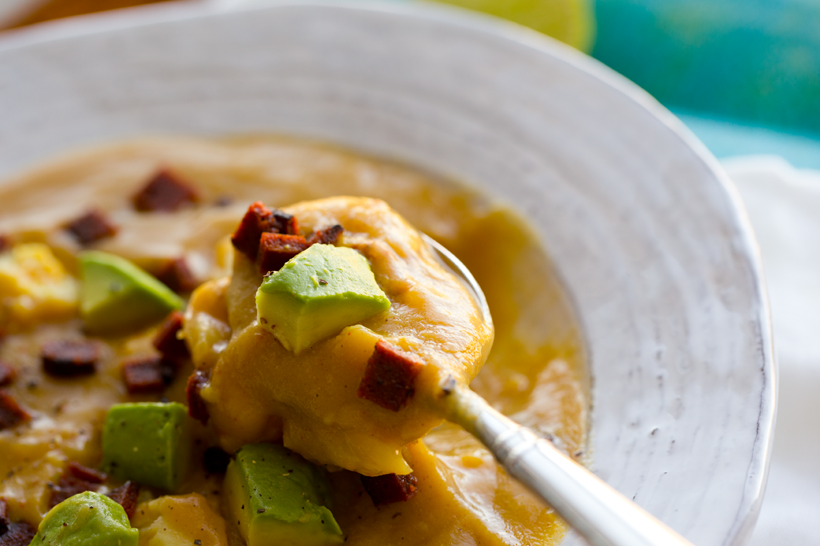 The best. I do not use that label often. I even checked. All my “bests” are here. 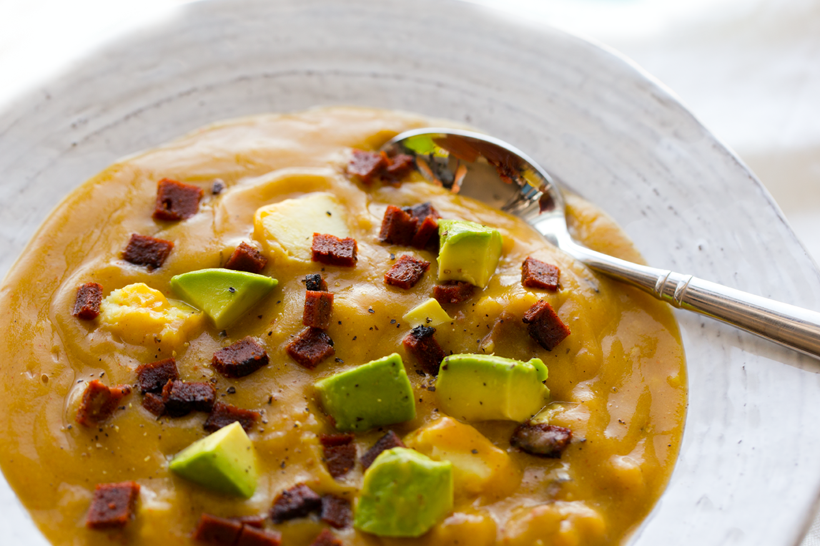 That white yam.. I had one small sized white yam that I used in this recipe. I think the white yam really helped both the texture (white yams are incredibly starchy and dense) and flavor, they have a mild sweetness. So if you can find a small white yam for this recipe that is the best outcome. BUT if you cannot find a white yam you have two options: 1) try a small regular sweet potato. But this will change the color a bit. 2) Use another plain white potato and if you’d like, add a teaspoon of maple or agave syrup to add a tiny accent of sweetness.

But seek out that white yam! They are pretty awesome in creamy soups. Anyone who has my cookbook will know that I actually have a soup called White Velvet Soup which uses white sweet potatoes. Sooooo good. 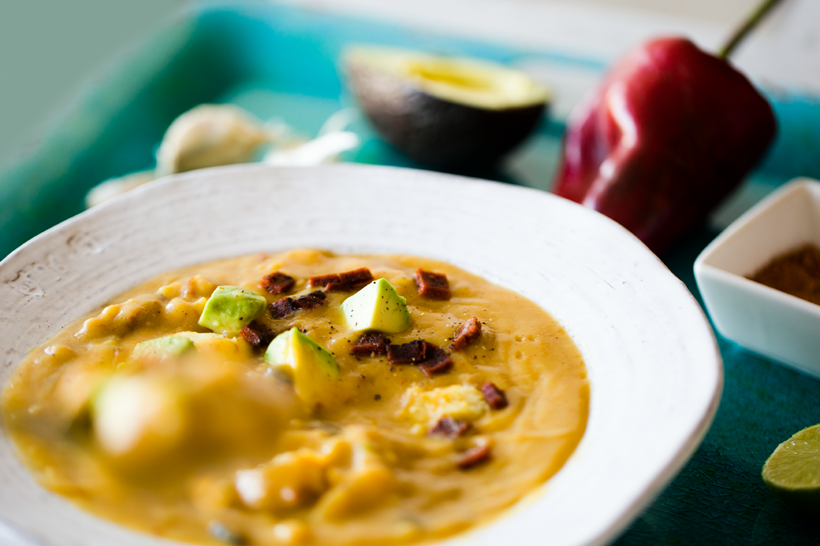 For the regular “white” potatoes, I used two extra large round-ish red potatoes and peeled off about 75% of the skin. I left some on just to add some extra fiber/nutrients because potato skin is so dense in those good things. You could also use one large russet potato (peeled) or two large yellow (round) potatoes. Lots of options for the white potatoes.

For Vegan Bacon, aka facon, I used Sweet Earth Food’s Benevolent Bacon. But you could also use vegan tempeh bacon.

Just make sure you simmer is slow + low. For as long as you can restrain yourself from pouring a bowl. It is all about the simmer. 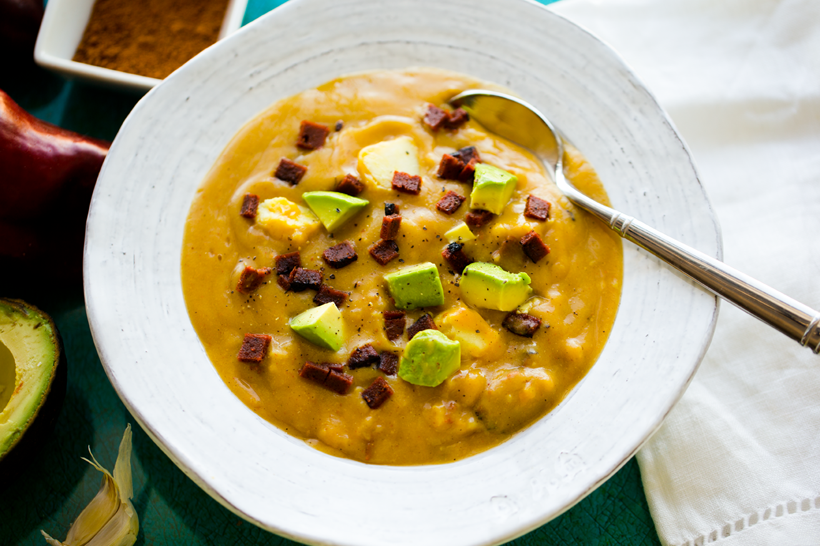 This is the best potato soup I have ever made. I do not know why exactly, but the combo of flavors, quality of ingredients and long, slow simmering process really made this soup rich, creamy, smoky and amazing. 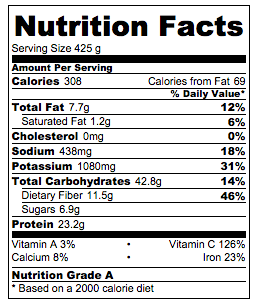 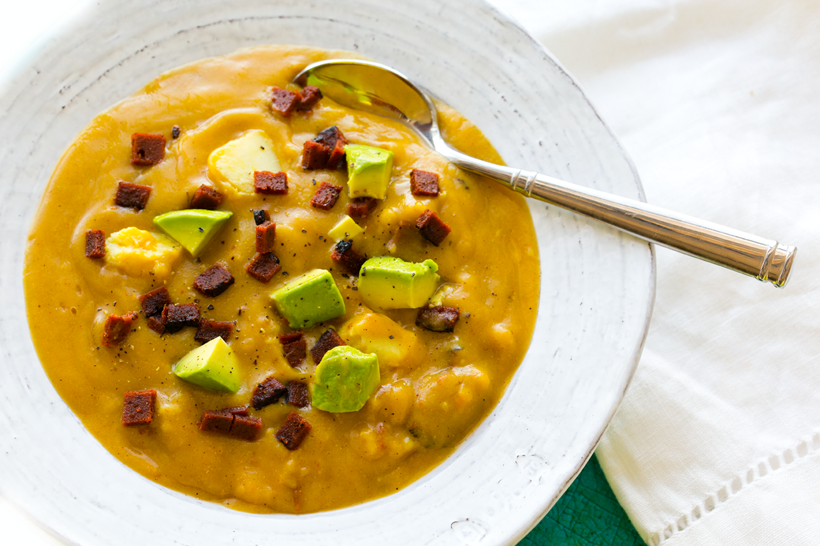 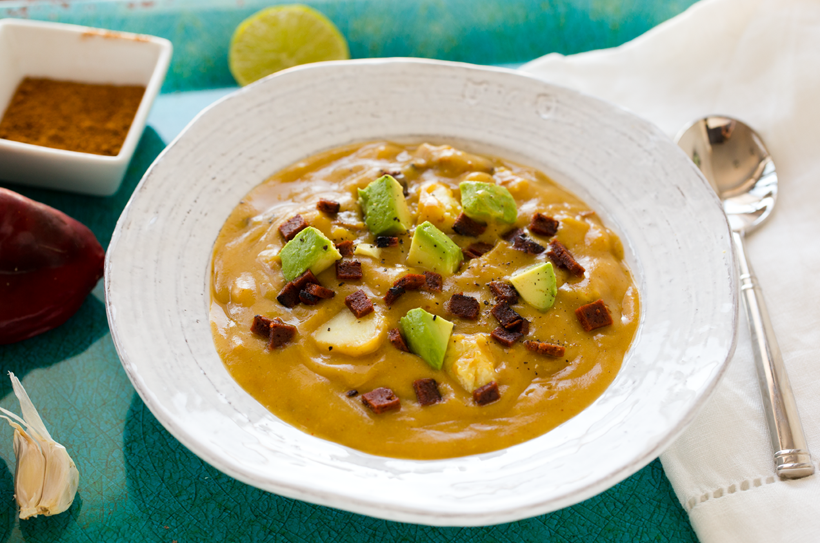 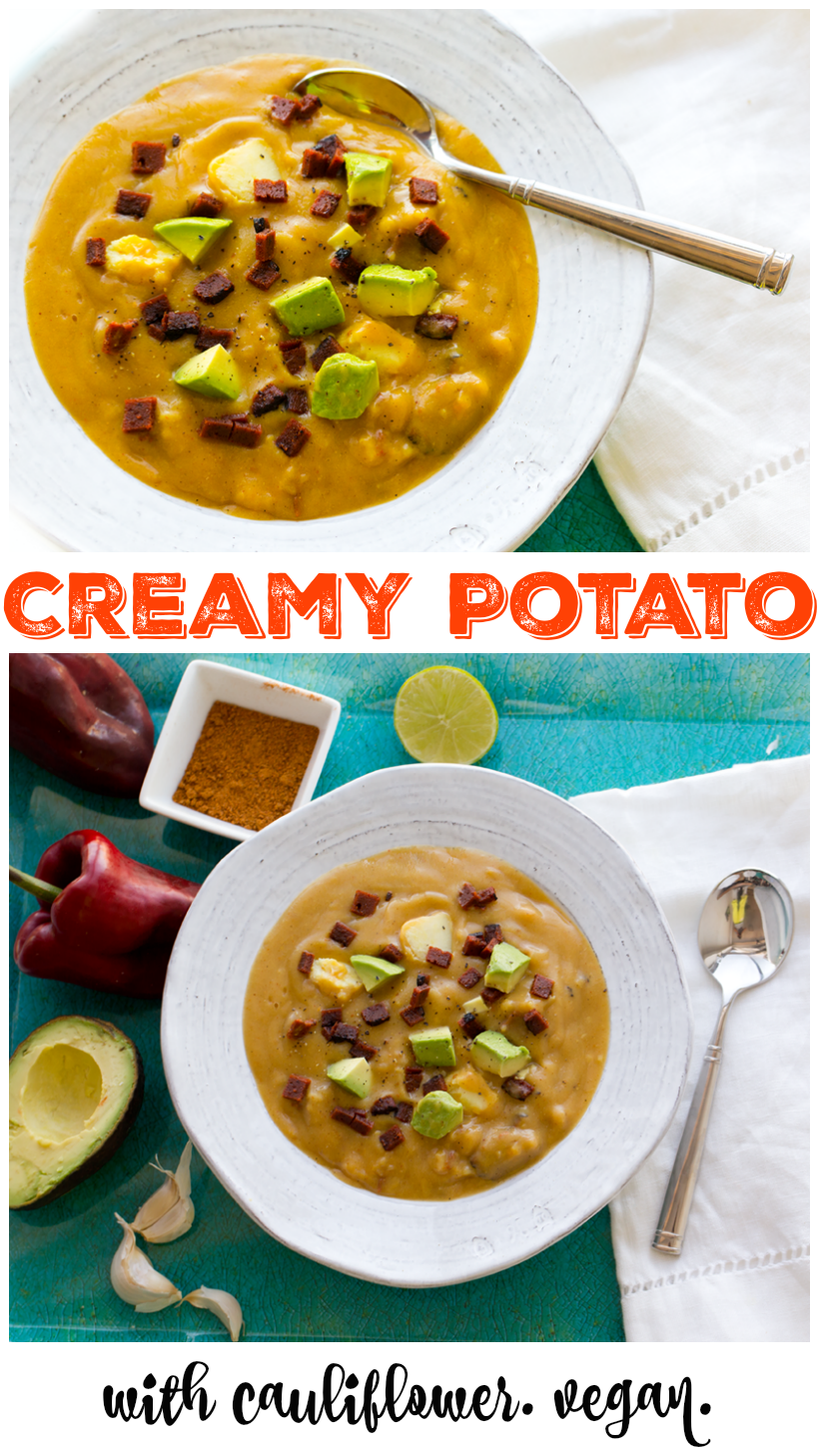