Today’s recipe for vegan Chocolate Cream Pie is a childhood fave of mine. I remember diving into big fluffy layers of chocolate and whipped cream and feeling like everything was just pretty darn great in the world…

..Cue the Saved by the Bell and Full House reruns. Cue the “Show me that smile again..” and “What ever happened to predictability..” sitcom theme music. And cue the stack of Garfield books by my bed. Cue Saturday mornings playing Twister and Monopoly with my sister, while watching Dirty Dancing, Labyrinth or Joe vs. the Volcano for the one billionth time. Cue the feeling of never having heard of a cell phone – except for the one Zack Morris carried around in his backpack. And cue the Spice Girls, classic Madonna and Gwen Stefani (before she was on every magazine for having ‘aged amazingly’). I could definitely go on, and on, but I won’t. I mean, all that in some chocolate + whip? Yup. Kinda. For me anyways.

Well the good news is that I have this pie. Rich and silky chocolate filling topped with fluffy coconut whip. Dairy-free + vegan. Win and win.

Chocolate Pie. This dessert recipe is easy to make and bonus, it is packed with plant-based protein. And we all know that chocolate is magical.

So if you are feeling this chocolate + whip vibe with me, hop in the kitchen and treat yourself this week..

UPDATED POST. I am excited to update this recipe post + photos. I first published this recipe back in late summer, 2011.

And the new stuff. This is one of my favorite blog recipes simply because it reminds me of my own childhood, as I rambled about above. I didn’t even get to the late nineties when Titanic, NSYNC and Britney came into my life. Don’t worry, I won’t continue on this tangent, but promise, you can always ask me what my fave early 00’s songs were, what Britney’s best live performances were and exactly how many times I actually saw Titanic in theaters. I will gladly oblige. Ha. Ok, back to dessert.

Chocolate pudding with fluffy whipped cream was one of my all time fave desserts. And when we made it into a pie? Even better! This recipe brings all those flavors and textures in a vegan, dairy-free version…

This version takes my chocolate pudding and gives it a bit more richness and slicing power via coconut oil. Coconut oil firms up in the fridge, yet still keeps a buttery texture when mixed with silken tofu, so it really creates the perfect no-bake pudding pie filling.

Fluffy Whip on Top. In my original blog recipe, I used a product called mimiccream for the whipped cream topping. Sadly, that product has seemed to disappear from store shelves, and the internet. I even tried emailing the company! But no luck in solving the mimiccream mystery. I haven’t seen it in years. But no worries! Coconut whip does the trick…

Easy Chocolate Sprinkles. To top things off, I add a generous sprinkling of dark chocolate flakes. All you do for the flakes is find a vegan chocolate bar and slice off the edges using a Chef’s knife. Boom, instant vegan sprinkles. You can also use chocolate flakes on ice cream or cupcakes, whatever you’d like.

And before you dive in, if you just want to learn more about chocolate and it’s magical qualities and where it comes from: All About Chocolate.

PS. I also launched my brand new HHL store today! See the SHOP at top. (On the side if you are browsing in mobile). I have added some of my fave pantry, wellness, kitchen, pet, home/office and photography goodies. It was a lot of fun curating this store and I hope it helps give you some ideas for how to stock your vegan home and life.

…and yes, cacao if definitely in the pantry section! 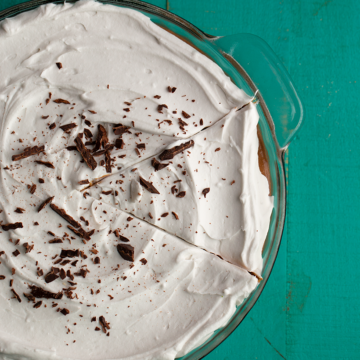 pin it for later..

Agar Agar? In the original recipe I also used something called agar agar to create a firmed, gel-like texture to the pie. I have chosen to omit that ingredient in the updated recipe. The results are a bit more of a soft, mousse-like pie. So not as firm when sliced, but still firm enough to slice. If you really want that gel-like texture to your pie, you can absolutely play around with adding agar agar. Here is how…

You will want to dissolve about 1-2 teaspoon of agar flakes into a liquid. I would try using ⅓ cup non-dairy milk or just basic water. Bring the liquid to a boil, in a small sauce pot, and dissolve the flakes – stir continuously until smooth. Then pour that mixture into the blender as you blend everything according to my recipe. Tip: Allow the agar mixture to cool slightly before adding to the blender so that you do not ‘cook’ the tofu.

But the agar is totally optional. The new photos I have added (turquoise background) are the recipe when you do not use agar. The older photos use agar.

Some of the original photos using the mimiccream and agar agar..