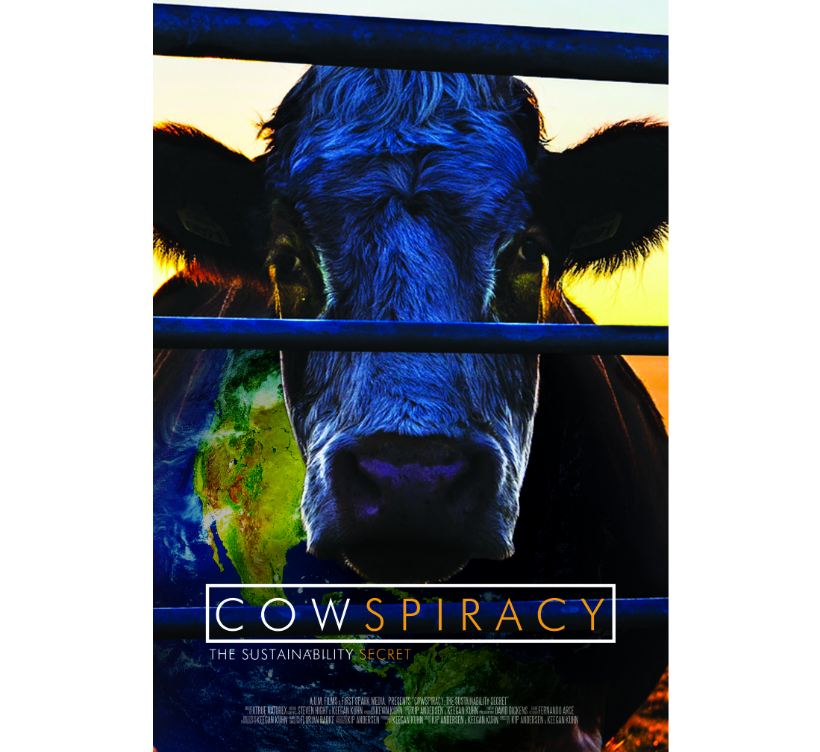 Cowspiracy: Documentary to Watch. I ran across this headline a few weeks ago: “Leonardo DiCaprio Takes on the Animal Ag Industry! Helps Bring ‘Cowspiracy’ to Netflix”

Cowspiracy? OK, maybe I need to see this one. And here are eight reasons why you will want to too. Reason #1 – it is streaming on Netflix – right now!..

Cowspiracy: The Sustainability Secret, is a groundbreaking feature-length environmental documentary following intrepid filmmaker Kip Andersen as he uncovers the most destructive industry facing the planet today – and investigates why the world’s leading environmental organizations are too afraid to talk about it.

8 Reasons Why You Need to Watch Cowspiracy: The Sustainability Secret

1. Streaming on Netflix Right Now.
If you are a Netflix subscriber, starting September 15th, you can watch the updated cut of Cowspiracy for free. What do you have to lose?

2. It is Not Just About Cows.
I thought this film was just about cows. And cattle farms. And meat. Not entirely true. Cowspiracy is about more. It is about humans. Our planet. The environment. The impact animal agriculture, of all kinds, has on the big picture.

In fact, one of my favorite quotes in the film is about pigs, and comes from the daughter of free-range cattle farmers:

“Some people think that pigs are dirty and gross, but I kinda, I really like them. They know people. And they will be friends..”

3. It Sparks a Passionate Response.
Several times during the film I wanted to leap from the couch, run to the window and shout out,

Of course I did not actually run to my window. I just shifted uncomfortably in my seat, burrowing myself deeper into the fluffy blue blanket wrapped around me. But once the film ended, I was inspired to google and research – learn more – and write this post. ..Which I guess is kinda like shouting from my window, right? My virtual window.

At least one acre of rainforest is cleared every second and the leading cause is to graze animals and grow their food crops. That is essentially an entire football field cleared every. single. second. #cowspiracy #change #rainforest #agriculture #climatechange #climateA photo posted by Cowspiracy (@cowspiracy) on Jan 11, 2015 at 4:11pm PST

4. The Story. Kip and Keegan.
The film was made by Kip Anderson and Keegan Kuhn. Kip is the guy you see on camera, narrating his journey. Keegan is behind the scenes.

I loved how first person the documentary was. Instead of just throwing facts and figures at you, from a faceless narrator, this documentary follows the journey of one person. I think we can all relate to that feeling of wanting to know more about a subject that we are passionate about.

This story started for Kip because he was passionate about being an environmentalist. This is his journey, fueled by passion and a desire for truth.

5. The Facts.
At the end of this post I share some of Cowspiracy’s stunning facts. Check them out.

Californians can be motivated by this..

6. Easy to Watch. Mostly.
Unlike many animal agriculture films, this film was very easy to watch. There was only one scene that I would advise sensitive souls to NOT WATCH. The scene where the backyard animal farmer kills one of his ducks. I basically saw what was coming and looked away. Luckily, there is an emotional boost right after that scene.. The scene of Kip with that little happy rescued chicken riding in the front seat of his car.

7. Leonardo DiCaprio. I mean..
Leo’s involvement in this film definitely caught my eye. I mean, animal activism with a dash of my favorite actor? How could I resist? And Leo is not only a crazy-talented actor, but he is a passionate environmental activist and animal lover, so much that he created the Leonardo DiCaprio Foundation in 1998.

“In 1998, Leonardo DiCaprio established his foundation with the mission of protecting the world’s last wild places. LDF implements solutions that help restore balance to threatened ecosystems, ensuring the long-term health and well-being of all Earth’s inhabitants.”

8. It Starts an Important Conversation.
I chatted with my husband about this film for a good hour after watching it. We googled facts, watched follow-up interviews that Kip did and had a general interest in how this story will evolve and play out. This conversation needs to continue. And I am so excited that Leo and Netflix agree.

We all want our planet to thrive, even if for selfish reasons.

What person out there could argue against wanting a healthier planet and feeding all the humans on it? And hopefully, that desire can lead to behavior changes when we see that positive changes are possible in our lifetime.

“Around 75% of Americans consider themselves environmentalists.” Can you be an environmentalist and still eat meat? Howard Lyman, aka the Mad Cowboy, former cattle rancher and current vegan says no.

– Go Vegan. A person who follows a vegan diet PRODUCES the equivalent of 50% less carbon dioxide, uses 1/11th oil, 1/13th water, and 1/18th land compared to a meat-lover for their food.

– Every Hour. 70 billion farmed animals are reared annually worldwide. More than 6 million animals are killed for food every hour.

– Livestock and their byproducts account for at least 32,000 million tons of carbon dioxide (CO2) per year, or 51% of all worldwide greenhouse gas emissions.

– The Future. Emissions for agriculture projected to increase 80% by 2050.

– Rainforests. Animal agriculture is responsible for up to 91% of Amazon destruction. — 1-2 acres of rainforest are cleared every second. — Up to137 plant, animal and insect species are lost every day due to rainforest destruction.

– Agriculture is responsible for 80-90% of US water consumption. And growing feed crops for livestock consumes 56% of water in the US.

– Californians use 1500 gallons of water per person per day. Close to Half is associated with meat and dairy products.

– Dairy. 1,000 gallons/liters of water are required to produce 1 gallon/liter of milk.

– The Price for Speaking Out. 1,100 Land activists have been killed in Brazil in the past 20 years. — One powerful example is Sister Dorthy Stang.

– Oceans. As many as 2.7 trillion animals are pulled from the ocean each year. — We could see fishless oceans by 2048. — Scientists estimate as many as 650,000 whales, dolphins and seals are killed every year by fishing vessels.

– Drugs. 80% of antibiotic sold in the US is for livestock.

– Feed People. 82% of starving children live in countries where food is fed to animals, and the animals are eaten by western countries.

– The bottom line. “Animal agriculture is the leading cause of deforestation, water consumption and pollution, is responsible for more greenhouse gases than the transportation industry, and is a primary driver of rainforest destruction, species extinction, habitat loss, topsoil erosion, ocean “dead zones,” and virtually every other environmental ill. Yet it goes on, almost entirely unchallenged.

As Andersen approaches leaders in the environmental movement, he increasingly uncovers what appears to be an intentional refusal to discuss the issue of animal agriculture, while industry whistleblowers and watchdogs warn him of the risks to his freedom and even his life if he dares to persist.” – Cowspiracy 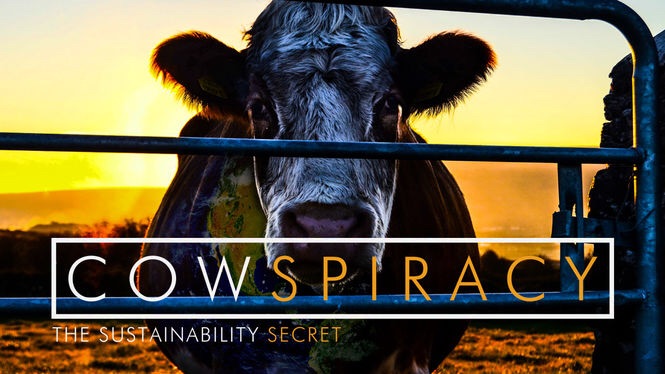