Each year I like to refresh my go-to pumpkin pie recipe. So for 2011, I bring you this Four Ingredient Pumpkin Pie – this recipe is easier than ever!

Last year I posted a recipe for my 5-Ingredient Pumpkin Pie. You guys were simply giddy about the minimal ingredients. Well this year I’ve proudly revamped that recipe. Sliced the ingredients down even more. And it worked!

This four-ingredient pie filing tastes amazing. Thick and rich with a pumpkin spice maple flavor that tastes just as classic pumpkin pie should. The secret ingredient is again – those soaked cashews – I kept those from last year’s recipe.

Want Coconut Whip? Two ways to get it..
1) Swirled Whip. Use a Frother can. Fluffy, airy, better-than-store-bought vegan whip.
2) Silky Whip. Use a hand beater for a silky “cool-whip” style whipped coconut cream. 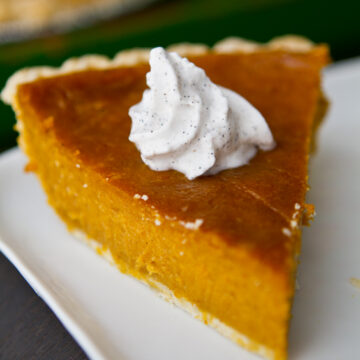 I hope you serve up this easy Vegan Pumpkin Pie – get in and out of the kitchen in a flash so you can spend the holidays with your guests.
4 from 10 votes
click the stars to rate
Print Pin
Prep: 20 mins
Cook: 45 mins
Servings: 8

vegan pie crust – make your own using my instructions in this post. Also reference my crust-making how-to video here.

I was a bit annoyed at myself for not making my own crust for this pie. I used a vegan frozen crust from Whole Foods – easier since I was experimenting with recipes. I WILL for sure make a from scratch crust when I make this again for Thanksgiving. Flaky, vegan buttery, homemade vegan crust is oh-so-much-better than anything frozen. My how-to make pie crust instructions here will assist you. And watch my How-to Vegan Pie Crust Video too.

I hope you serve up this easy Vegan Pumpkin Pie – get in and out of the kitchen in a flash so you can spend the holidays with your guests.