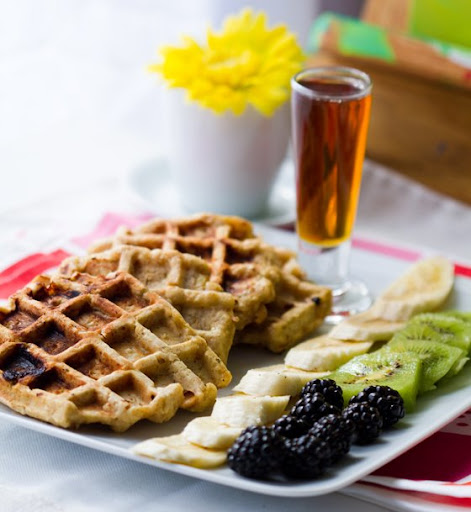 These vegan Maple Peanut Banana Bread Waffles were an delicious addition to my weekend. I was craving banana bread and waffles. Hmm, decisions, decisions. So when life hands you two cravings: combine them! Well OK, this only works with certain foods. Chocolate Cake and say, salty pickles probably do not “combine” well. But you already knew that.

Get my recipe and check out a few more yummy vegan eats from my weekend..

Do not forget the maple syrup. For that would be a waffle tragedy.. 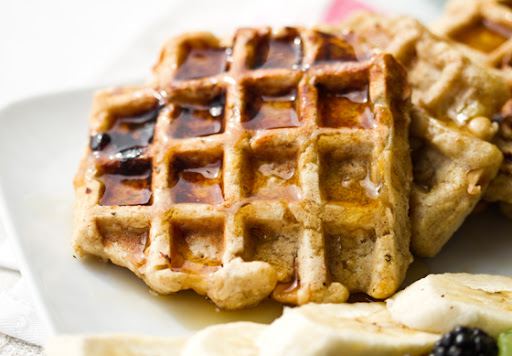 Nelly loves the smell of waffles in the morning… 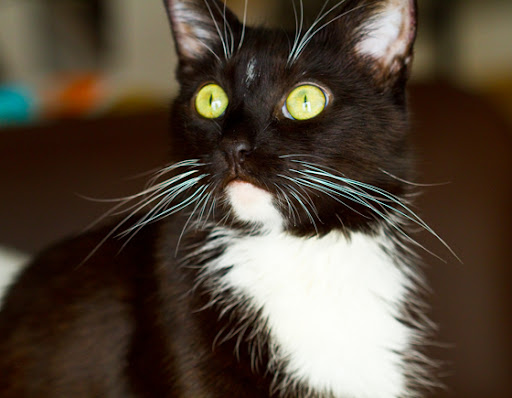 Side of ‘deconstructed fruit salad’ – kiwiws, blackberries and banana.. 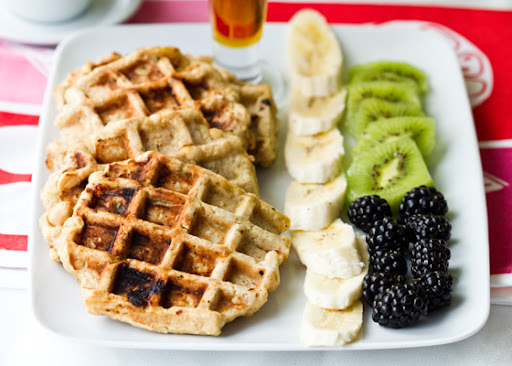 Yes, it was a swell weekend in food. There were plenty of smoothies. Which is why I felt compelled to post my Smoothie Guide yesterday. This weekend I made a pink-power grapefruit smoothie and a creamy cool Peaches and Banana and Cream Soy Shake… 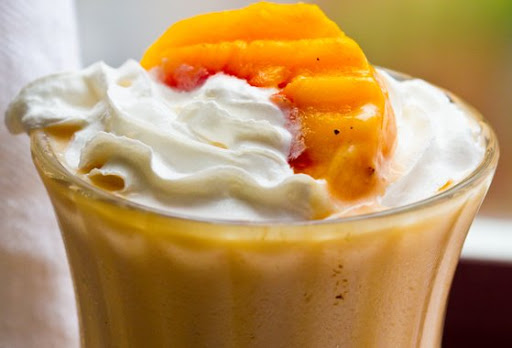 Then there were these little Buttery Crunch Oatmeal Cookies – I was inspired to make them as the rounds for coconut milk ice cream sandwiches. Yum… 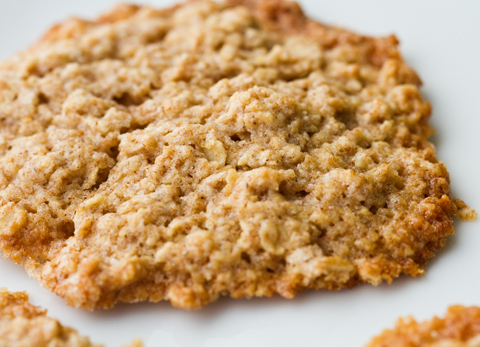 Then there was an amazing lunch at Pizza Paradiso in Georgetown, Wash DC. Vegan pizza with loads of veggies, vegan cheese and a nutty whole wheat crust. Plus a fabulous salad with white beans and soft sun dried tomatoes. Iced tea and warm bread on the side.

Then there were these “banana bread” waffles. They remind me of a peanut butter and banana sandwich. Or perhaps a slice of warm banana bread slathered in crunchy peanut butter. Super cozy. And easy. If you don’t have a waffle maker – get one! I literally make all my waffles on a $15 machine. Works like a dream and it’s quite compact so I can just stash it away under the counter when not in use. ..my counter space is pretty cramped with my juicer, Vitamix and Panini press – all of which have a permanent spot secured for them. Lucky appliances.

Banana Bread. Waffles. I hesitated on making these waffles when I realized I was out of chopped walnuts – classic banana bread usually calls for walnuts – but the peanuts added a fun and tasty level of flavor. I will certainly be making these again.

Pair these waffles with a zesty deconstructed fruit salad and some hot chai or coffee and a happy healthy breakfast awaits you. Fluffy waffles for breakfast anyone?.. 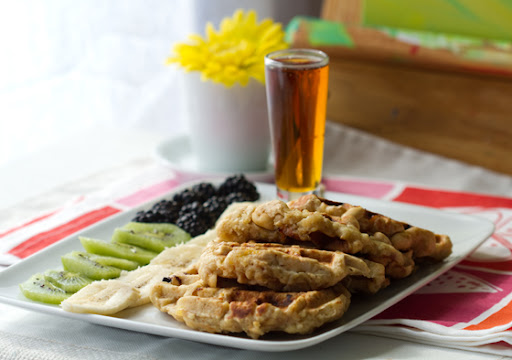 And yes, you could easily make these waffles even on a hectic weekday morning. Just mix up the batter, pour on your waffle iron and in 5 minutes you’ll be enjoying a warm breakfast bite. Sure does beat a Pop-Tart.

1. Warm up your waffle iron.

2. Combine all your ingredients in a large mixing bowl. I fold by hand.

3. Pour a few heaping spoonfuls of the batter onto your hot waffle iron. Cook until edges crisp and brown – usually only about 4-5 minutes.

4. Prep your fruit salad – by slicing and arranging fruit on plate. Add a side of maple syrup. 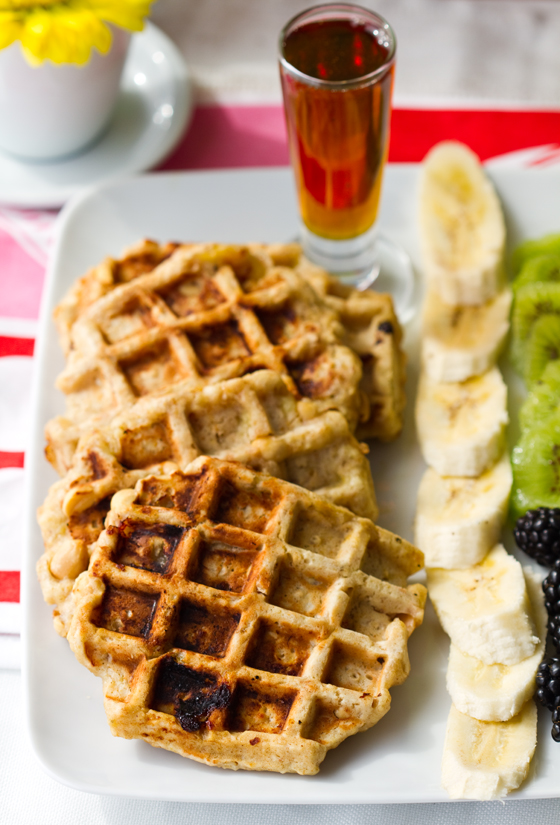 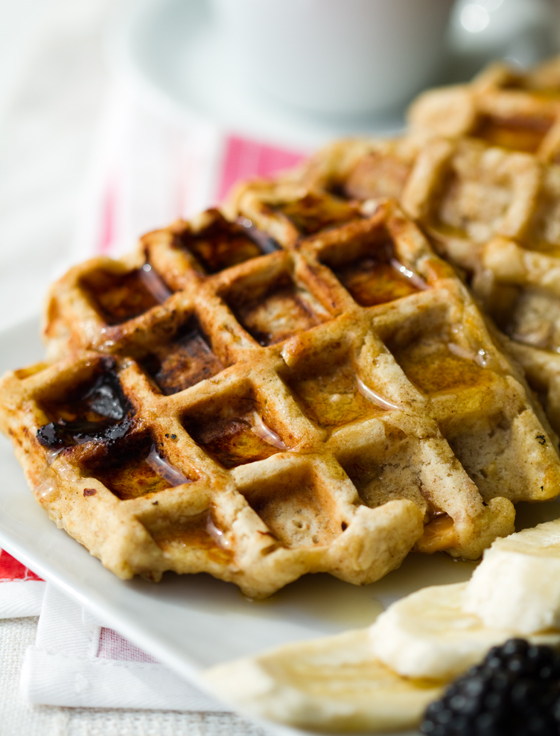 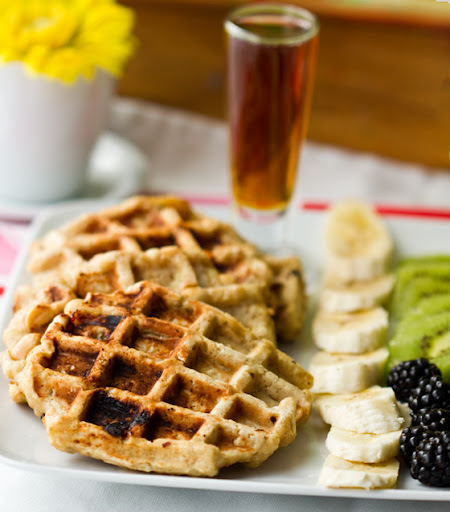