Home » This and That » Is Honey Vegan? Poll Results and Your Comments! 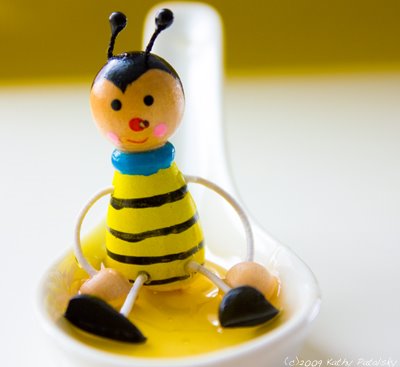 The results are in from my “Is Honey Vegan?” online poll. And you all had a lot to say! The largest percentage of votes – 41% – went to the “I am vegan, and NO honey is not vegan” segment of the voters. Full results ahead…

Great Comments! Loved all the comments, even the kooky ones. A few of the my faves:

Funniest: “..bees are tied to wherever their nest is. They do not flit about and have raves every evening at different nests. ” -Anonymous
“How about tapping a maple tree? … [I’m not being a jerk, I’m really asking.]” -KT_

Good Points: “I believe we shouldn’t farm animals or insects no matter how small” -Sarah
“As humans we are often trying to fit ourselves into a box of standards based one what the “collective” has decided. I know many vegans who don’t eat honey simply because they are told it’s not vegan, but will stomp on a spider without hesitation should one crawl across their bathroom floor.” -Erika

Most Passionate: “… I am personally offended by individuals who consume honey yet refer to themselves as vegan.” -Adam

Click ahead for more chosen comments, and full poll results. And find out what I think on this issue…

Why the Poll? I ran this poll because like many people, the issue still conflicts me. Early on in my blog I would add agave/maple and/or honey options in my recipes. And I got a lot of emails saying that honey is not vegan. I never knew how passionate the non-honey eaters were about the issue until I started this blog. So being incredibly curious, I decided to post this poll. Not a scientific poll by any means, but I find the results interesting. But the comments are amazing, thoughtful…and entertaining.

My View. I love agave and maple syrup, so I really have no need for honey, but I will admit that I haven’t banned it from my diet. If I’m in a restaurant ordering tea and it’s between bleached white sugar, pink packets or honey-I will go with the honey. Although, I greatly respect any vegans who believe honey is not vegan. And yes, honey is technically an animal product (or insect product), right? , so does that make me not-vegan for eating it? Or do we need another term for vegans who do and do not eat honey? Beegans? Ugh, labels labels labels…

The Results:
(note the poll is still live and so votes are still being counted.)
total votes at review: 283
Yes Honey is vegan: 39%
No Honey is not Vegan: 61%

Broken down by vegan/nonvegan voters:

Your Comments. My Faves. These are blog-reader comments that I thought everyone should read, but I don’t necessarily agree with all of them…

“As humans we are often trying to fit ourselves into a box of standards based one what the “collective” has decided. I know many vegans who don’t eat honey simply because they are told it’s not vegan, but will stomp on a spider without hesitation should one crawl across their bathroom floor.” -Erika

“Most vegans do eat honey, even though it’s not technically vegan. I agree with Gregor–the honey issue makes us look foolish. There are good reasons to not eat honey but it should not be a prerequisite for being vegan if we want a vegan world.”
-Anonymous

“Response to anonymous from tangerine: anon, yeah it does make us foolish, b/c honey is the easiest thing to give up out of all animal products- and yet some won’t for some reason. ” -tangerine

“I love this debate. Some have told me I am not a vegan because I occasionally use honey! I buy only raw honey from a local producer that is super nice to the bees. I have needed honey for the antibacterial properties while I lose weight and heal my body. Sorry anti honey vegans 🙁 ” -VeganWoman

“I agree with VeganWoman. I really don’t consider honey an animal product. Yes, I know – bees are insects – insects are animals but I never consider honey as being non-vegan. That’s my opinion. “-Ina

“I don’t think being honey-less is a rule within veganism, but it’s more a matter of choice. “-Erin

“My not eating honey or any other animal product has nothing to do with the cuteness or icky factor.

Additionally honey isn’t vegan according to Vegan Society, that coined the term. I might sound picky, but hey I cant really tell anyone what to eat, but the sensible thing would be not to label ourselves something we’re not. I don’t understand why some fish & chicken eating ppl call themselves vegetarians. Or why some so called vegans eat eggs… It’s really making it more difficult for the rest of us when ordering veg*n in a restaurant. So please lets use proper labels or for those of you who find these labels inadequate- feel free to come up with new ones!”
-Tangerine

“Bees are disappearing at an alarming rate today, and we don’t know why. Without these honey bees the plants we love to eat wouldn’t be able to survive either! So I support local honey, which supports maintaining our bee populations and our local agriculture!”
-cinnamonapple

“Response to Cinnamon Apple from tangerine: “Cinnamon: beekeepers are not in the business of supporting nor maintaining bee population. In theory you could build an artificial beehive if you really were worried about the bee population and then let the bees take care of the rest. But in practice the beekeepers exploit these creatures and take whats naturally theirs- honey – and then feed them sugared water. If I were a bee I’d be pissed-” -anonymous

“By definition honey is not vegan…Vegan is not a slang term and I am personally offended by individuals who consume honey yet refer to themselves as vegan.” Adam K.

“…..you are stealing this honey from the bee. Do not make the mistake in thinking honey is a waste product or that these insects are not killed by the masses for their energy product.” -Adam K.

“I believe we shouldn’t farm animals or insects no matter how small” -Sarah M.

“…if I were cooking for a group of Vegans, honey would definitely not appear on my ingredient list. ” -Erika 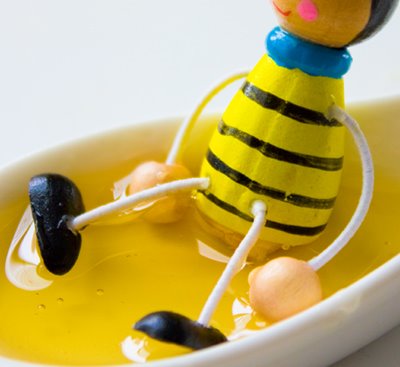 “I love honey, but don’t eat it very often. Back when I first became vegan, I googled honey to find out what atrocities were being inflicted on the poor bees. Couldn’t find much, except that they were being fed sugar water to replace their honey. I also read that bee keepers are quite fond of their bees, and take very good care of them. They (the bees) are also free to roam wherever, and return to their comb. In the spirit of veganism… maybe we could make an exception??” -DJ Karma

“Honestly, how many vegans do you know who care about the well being of arthropods? I don’t lose sleep at night over tenting our house for termites. It’s as simple as that.” – Sherrilee

“If you eat honey, then your not a vegan (veganism = to the furthest extent limit exploitation of ALL animals – hence, honey isn’t vegan).
Your just as the ovo-veggies calling them self vegeterians” -Karpasz

“For the argument that bees are somehow mistreated by not being allowed to ‘fly free’ I offer this: bees are tied to wherever their nest is. They do not flit about and have raves every evening at different nests. Therefore orchestrating where they could set up a nest (it is ultimately their choice as we have seen with the recent accounts of bees abandoning their nests) is not cruel.” -Anonymous 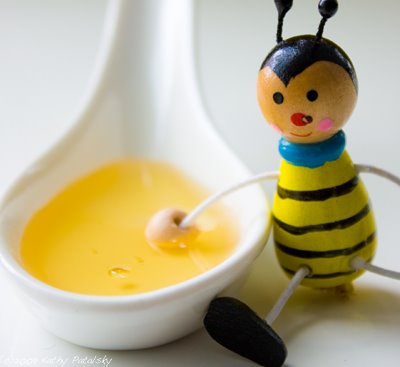