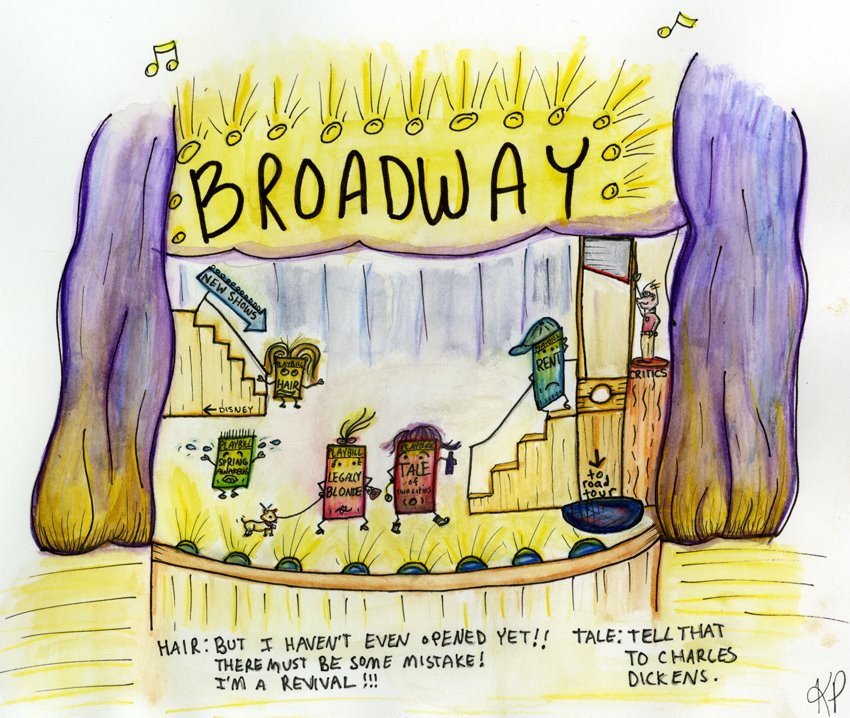 Boo Tale Closing. I wrote a “strongly worded letter”! I can’t help be passionate about this issue.
You can read and comment on the editorial piece here:

READ IN FULL MY OPINION LETTER REGARDING TALE CLOSURE

A Tale of Two Cities Guillotined by Critics—A Fans’ Outcry.

It is a dark day on Broadway when a show like A Tale of Two Cities closes its doors. Closing with just two weeks notice. Before the holiday tourist season. It is the critics who have guillotined this magically intoxicating show. In the end, it is theater lovers who have been duped again. Duped by those ill hearted, arms crossed, unimaginative pencil-pushing cynics. This show has been given an unfair trial. And as a passionate fan, I protest.

continued….Amidst the back-to-work blur of election week, I have a to-do list that runs out my door and down my block. But alas, I am putting aside reality to write this letter in support for what I think is one of the best shows on Broadway. I attended A Tale of Two Cities for my second show on November fourth. As the seven o’clock showtime approached, little did I know that the cast had just been informed of the show’s closing — just a half hour before the shimmering purple curtain rose. At the curtain call standing ovation, a weary eyed James Barbour, who plays Sydney Carton, broke the news to the audience who let out a spine tingling gasp. My jaw dropped to the floor in such shock that I could do nothing more than shake my head and feel the Al Hirschfeld theatre sounds and people melt and blur around me like globs of wet oil paint splattered on a canvas. Natalie Toro was sobbing next to James as he rambled on about the upsetting news. “This is outrageous!” I shouted to my husband in disgust. My giddy post-show smile was replaced by a little girls frown after she had just had her favorite toy taken away.

After the show I stood out by the silver bars at the stage door and waited to watch the players exit. I was surprised to see them put on such kind and brave faces for the fans–despite just getting canned a few hours before. Natalie Toro who similar to Barbour, has been working on her role for the past six plus years, chatted with fans with red eyes. James Barbour, who I would have expected to be grumpy, nauseas and simply depressed—came out with a kind face for the glum faced fans. “Not even a CD recording?” I vented to them all. “Too expensive. Apparently.” they responded.

This is the worst of times.

Where’s the justice for the fans? For the show? When did money and critics and the stock market seep its way into theatre owners business plans? Since when did the machine of Broadway turn into a system as lowly as say, network television? And when did bad critics get such power?

So why did Tale get kicked to the Broadway curb? I have three reasons.

1. The economy sucks. And even though hardcore theater fans will easily skip a celebratory dinner at Le Bernadin in exchange for tickets to their favorite show—the tourists are a bit more tight-fisted.

2. The shameless critics killed this one. My expectations of this show were very low, simply based on reading multiple bad reviews. I can only picture those pesky little critics sitting stiffly in their seat skimming another boring Playbill with glaring eyes and a twisted frown. Just another show to review, blah blah blah. They probably attended the show alone, devoid of a hand to clutch passionately as James Barbour belted out his heart-fluttering rendition of I Can’t Recall. I bet the critics even missed it when Barbour smiles at the audience mouthing the words “Oooh myyy God!” as he sings about the rosy cheeked Lucie—stars twinkling against a navy sky set. It gave me chills. It was magical. But clearly the critics missed the point. The point is that in moments like these, the audience is moved not by the story, but by the characters. The emotion. The heart. Smug critics clearly don’t have heart or better yet, they simply despise it. Go figure. The critics didn’t stop and look around at the glow on the audience members faces. All the critics saw was a story. A cast. A show. Oh it’s “Les Miz” only not. But the critics got it way wrong this time.

3. I saved my best point for last. It is in criticism to the marketing of A Tale of Two Cities. The publics’ impression of this show was that it was a big cast performing a historical book-on-stage. And the book just happened to be one they get queasy just thinking about reading back in high school. (Or trying to read) Big casts don’t close the sale! When audiences open their wallets for a show they don’t want a ‘cast’. They want a star! James Barbour is the un-highlighted star in this show. I’ve never seen an audience leap onto its feet at curtain call where…. they almost don’t realize what they are doing. Instead of standing for a show like say, The Lion King, where there is a high pile of good reviews to stand with you. Standing at the end of Tale was like standing up against the critics and wrong bad press. Standing up in response to your own hearts intuition, going against wrong first impressions. And notably, the sincere roaring applause for Barbour’s performance echoes in crisp clear shades of gold, say Tony gold in my opinion. I wish the producers had fiercely marketed Barbour as the star, a star you can’t miss on Broadway! The cast is amazing don’t get me wrong, but like I said, people want to see a star. James Barbour fulfills that desire. Barbour is to Sydney Carton as Crawford is to the Phantom.

The true tragedy of Tale closing is that it all came down to money. Lack of filled seats. However, I would bet my autographed Tale playbill that if hesitant theatre goers were smushed forcefully into those red velvet seats, by the time Barbour parades out in his black boots and draped white shirt, a satisfied and sincere grin on his face, they would be on their feet cheering for feeling a flutter in their heart that they did not expect to feel upon entering the theatre. But unfortunately, the curtain, the guillotine will swipe down for good come November 16th 2008. And theater lovers will be cheated of a remarkable Broadway experience. This is a tragedy.

The song, Let Her be a Child says,

Can’t we let this child of a musical grow into its place on Broadway—to eventually grow its word-of-mouth and stay at the Hirschfeld Theatre having past its troubled youth?