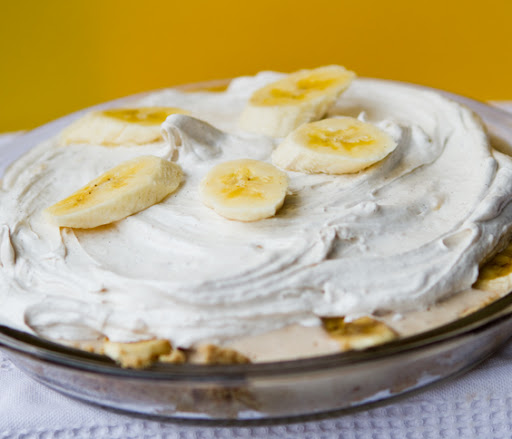 So glad you all are loving my “vegan cream pie” recipes! You’ve already seen Chocolate Cream, Grasshopper Mint Cream and Peanut Butter Cream. Well many of you requested a Banana Cream Pie. So here it is!..

This vegan Banana Cream Pie really blew me away in terms of its authenticity. I am again reminded of my stance that just about anything you love to eat can have a vegan version that satisfies.

This pie is topped with a velvety vanilla-bean layer of vegan whip. The rich banana pudding is creamy delicious. Homestyle. Comfy. Cozy. Fluffy as a banana cloud, if those existed. Sweet, silky, fresh banana slices are hidden between the soft layers of pastel yellow and cloud white.

Ahead, I share my recipe and a story. A vegan life lesson really. I explain why I’m trying to ditch the phrase “I don’t eat that.” and replace it with something a bit more open-ended and positive. Pie and a story in today’s post!.. 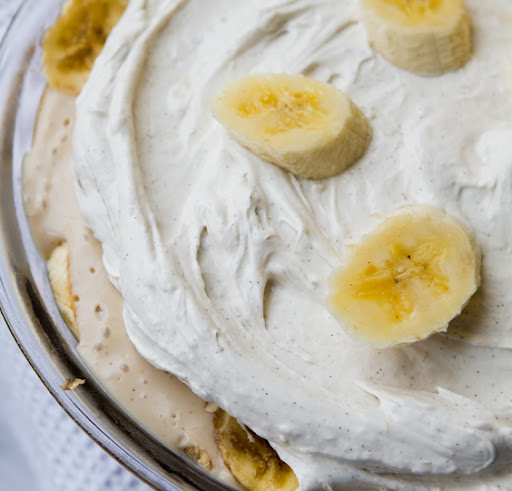 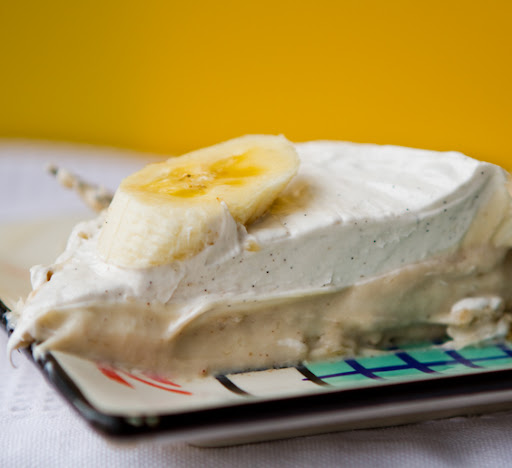 To top it off, a swirl of my homemade coconut “whipped cream” – described in this post 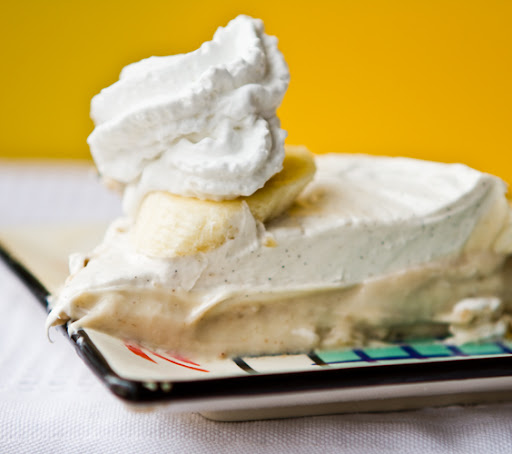 Banana Cream Pie was always my favorite “pie” as a kid. I’d beg my mom to pick one up at the supermarket. Each slice was creamy and sweet, layers of thinly sliced bananas swimming in silky banana pudding, topped with fluffy cream topping. Slivers of fresh banana on top. My spoon would swim through the oozing yellow pudding searching for hidden banana slices coated in cream and fluff.

For the longest time I put my banana cream pie love in the corner. Thinking that a dairy-free pie could never come close to recreating the bliss I found from the dairy-infused original. I was so very wrong.

My vegan version pie not only meets the mark, but exceeds it! Velvety vanilla cream topping with tiny specks of vanilla bean. Silky yellow, real banana pudding pie – flavored not by artificial flavorings, but real bananas. Actually there are a total of 3 ripe bananas in this pie. Not just a few slivers as garnish.

Healthy Top – the white stuff. Many of you will have trouble finding the “Healthy Top” topping I use in the recipe below. It seriously rocks. Seek it out if you want to re-create this pie exactly.

1. The agar agar (vegan gelling agent) is optional, but if you are using it, you will need to heat it in a small sauce pan with the coconut milk and maple syrup – high heat for about 3 minutes – or until the agar beads have dissolved. Stir constantly. If not using agar, still heat the maple/coconut to reduce the liquid a bit. Immediately after turning off the heat (with or without using agar) add in the 2 tablespoon virgin coconut oil. Allow to slowly dissolve in the still-hot liquid.

2. In a high speed blender (or food processor), add the silken tofu, banana, vanilla extract, salt and the hot maple/coconut mixture. (If using agar, strain hot liquid through a mesh strainer so that any leftover clumps of agar stay out of the pie). Blend on low -> medium -> high until the mixture is silky. Taste test. Add more salt if needed.

3. Prep your crust in a pie pan. Add about ½ cup of banana slices to the crust. Pour the pudding mixture over top. Add a few more banana slices over top the filling and around the edges. Place in fridge. Chill until firmed. A few hours.

*note, using the agar agar will significantly firm up your pudding pie – without the agar it will be more of a soft-set pudding (yummy either way)

4. When ready to serve pie – you can pull your Healthy Top box out of the fridge (it needs to chill at least an hour before whipping). Add the contents, a ripe banana, vanilla specks to a large mixing bowl. Beat until fluffy and creamy. Make sure the banana has been smoothed into the whip.

6. Serve right away or chill in the fridge until ready to serve. Chilling will allow the white whip layer to firm up a bit. Enjoy!! 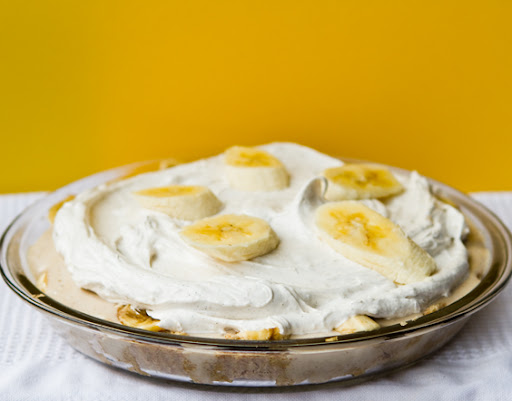 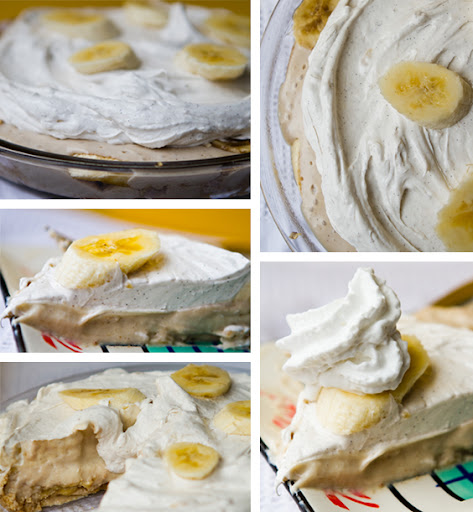 Now here’s a story to go with your pie.. Since there are two things I hope you walk away from with this post:

1) an awesome banana cream pie recipe
2) the inspiration to change your language as a vegan (or vegetarian – or even gluten free, any special diet really). To pause before saying “I don’t” or “I can’t” when responding to food offerings that contain animal products.

I always learn stuff from kids. The other day I was riding home from mini golf with my sister, husband and her two cutie pie kids. My five year-old nephew was energetically munching on some cheese-crusted crunchy pea snacks, as happy as a cow munching grass. He reached into the bag, pulled out a gritty green pea crisp – white frosted from the cheese – and pointed it at my mouth.

“Here!” He said in a sweet way, his arm firmly outstretched towards my face. He was sharing his snack with me, ah, that’s sweet. But with my mouth tightly closed, dooming that a rambunctious five yr-old would just love to stuff the crisp right inside my mouth if given the chance, I carefully muttered out, “I can’t eat that.”

He looked confused. “I don’t eat that since it has dairy.” I continued. He looked sad. And even a little annoyed. There was a silence in the car. He brushed it off once he remembered that I don’t eat the way he does. He loves to discuss how “Aunt Kathy is an herbivore instead of an omnivore.” Ha.

But instead of communicating to him that my “special diet” involves restriction, I should be showing the positive loveliness of being vegan. I love crunchy snacks! But mine are simply animal product free. It takes a while to get to this place, this feeling, but I can proudly say that I don’t feel restricted or deprived as a vegan at all. I didn’t always feel that way.

Anyways, the moral of the story is that I felt simply sick to tell a young kid that I “can’t” eat something. Or I “don’t” get to eat certain things. That’s so not the point of veganism!

As I’ve learned over the past ten “veg” years of my life, there are so many things I can eat. You can “veganize” just about anything. OK, souffle, haven’t cracked that code yet. But if you want a “vegan version” of anything in the food world – it can be done.

Instead of saying “I can’t eat that.” to my nephew, I should’ve said.

“I prefer to eat crunchy snacks made from just veggies or with some yummy nutritional yeast on top! Tings, Soy Crisps, Kale Chips and Veggie Booty are yummy!”

A few more examples (And I guarantee these will come in handy this holiday season when the main topic of any party is the menu and holiday food!)

Pumpkin Pie: ” I only eat pumpkin pie that is plant-based, I have this killer recipe for one made with soaked cashews and tofu cream cheese. It is SO good!” recipe

Mainstream Halloween Candy: “I only eat plant-based candy. Like dark chocolate made from real cacao and these amazing plant-based ginger chews. They even have a vegan candy bar filled with coconut, almonds and chocolate. Mahalo. And one that taste better than a Snickers bar. The company is called GoMaxFoods

Meat: “I only eat plant-based, cruelty free proteins like tempeh, seitan, tofu, yummy whole food beans, lentils and these amazing products called Gardein which actually mimic meat (If you like that sort of thing). And did you know that really, most fruits, veggies and grains have protein in them anyways.”

Buttery Mashed Potatoes: “I only eat mashed potatoes made from Earth Balance – it’s like dairy-free butter, but tastes just like it. And potatoes whipped with plant-based milks – I add some nutritional yeast, garlic and hemp seeds to mine and they have this incredible savory, cheezy flavor that is amazing!” recipe

Hot Cocoa or latte with Dairy Milk and Whip: “I only drink soy or coconut based hot cocoa or lattes. Actually, I make this amazing whipped topping made from 100% coconut milk. It tastes even better than whipped cream!” recipe

…get the idea? Instead of saying “I can’t” eat something. I am changing it up to say how I can eat whatever they are eating – only my version is vegan and plant-based (which is usually healthier and cruelty free).

Don’t be afraid to speak up. I find most people are actually very interested to learn about vegan versions of their favorite mainstream foods. So even if they aren’t vegan, don’t be afraid to peak their interest. Get a conversation started – it feels so much better than stuffing yourself in a conversation corner with the dreaded, conversation killing phrase, “I don’t eat that!”

Share it: quick reminder, if you like this post, please share it by using the StumbleUpon button at top. StumbleUpon.com is such an awesome way to find new websites that pinpoint your interests – they even have a vegetarian category where I love to review others recipes. Stumbling is a great way to spread the word about yummy vegan recipes and photos! Big thank you in advance if you “thumbs up” this post. 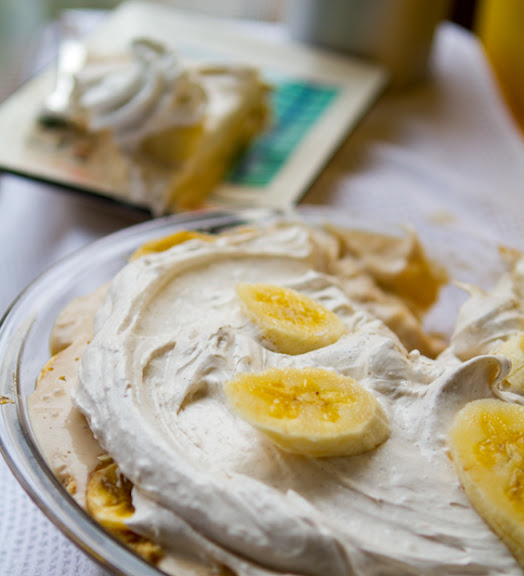 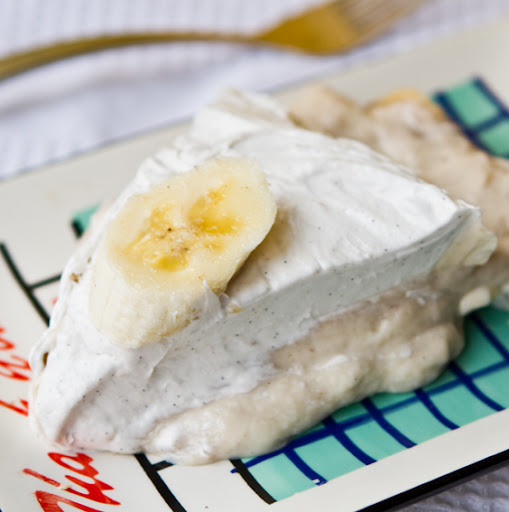 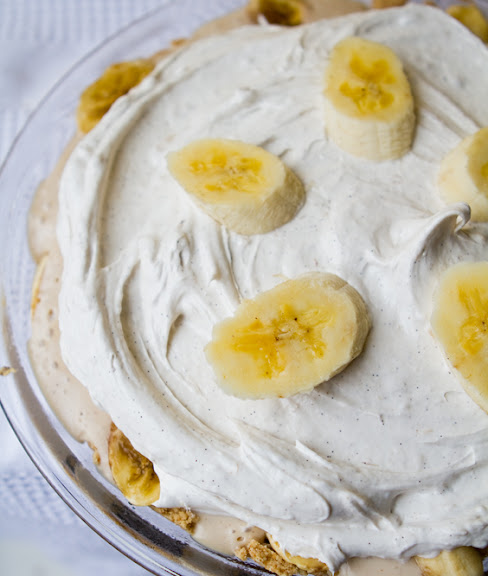 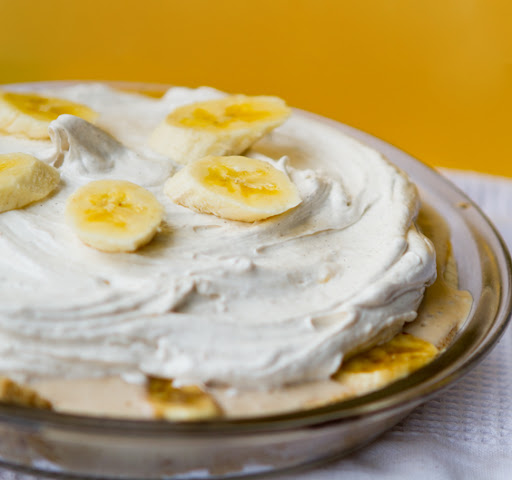 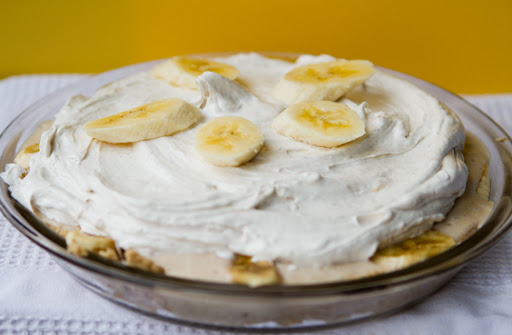