I remember when I used to wander through the New York City greenmarket in fall and winter I’d always see stacks of plump Apple Cider Donuts. Wrapped in tidy little bags, all glittered with cinnamon and sugar. They looked so good! But since they weren’t vegan, I never got to indulge in those fluffy little rounds. Well finally, I decided to whip up some Apple Cider Donuts of my own!…

These fluffy, boldly flavored donuts taste like sweet apple cider, cinnamon spice and of course sparkly sugar on top. They are easy to whip up and pair deliciously with a warm mug of cocoa, tea, coffee or whatever your fave winter beverage happens to be.

In my vegan donuts I usually use flax seed or a fruit-based egg replacer. In these donuts I used, what else, a fresh chopped apple. It worked very well!

How to get Bold Apple Cider Flavor

I always wondered how apple cider donuts actually tasted like apple cider. I mean, you couldn’t just add say 1/2 cup of straight up cider and get anything more than a very muted apple flavor. so I figured that there must be some process of boiling down the cider – reducing it to intensify the flavor. With a quick bit of research, I indeed found that all the best apple cider recipes reduce the cider.

You can read Sally’s Baking Blog to see how she indeed does reduce the apple cider for her Cider Donuts. Sally is such an amazing baker, so any tips she might have for cider donuts, I would certainly listen to!

So I took Sally’s advice and took one and a half cups of apple cider and simmered it on the stove for about ten minutes – until it reduced to a half cup. They I used that in my recipe.

I used a vegan cane sugar, which has a medium-sized, sparkly crystal to it. You could also use coconut sugar, but you won’t get that signature sparkly look to your cider donuts. Choose a sugar that is fine enough to stick to the donuts, but also has a nice crystal to it.

I used this cane sugar. I always choose organic sugars because they are almost always vegan. 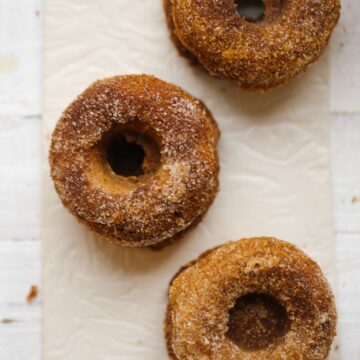 This donut recipe was based off of my Glazed Vegan Donuts…