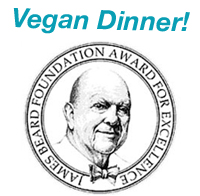 Sidenote. While reading Beard tweets, I was struck by how the Beard Foundation’s twitter background, is littered with piles and piles of meat and cheese. Oh the hilarious irony.

Haute Vegan at the House. Vegan, really? I am always perusing the Beard House events hoping that they will embrace a vegetarian or vegan Chef at one of their esteemed foodie dinners. So when I saw the “Sensational Spring Vegan” dinner featuring Kate Jacoby and Richard Landau from Horizons Restaurant in Philadelphia, I was thrilled. Hooray! Beard House has hopped on the delicious, healthy, happy vegan train. (Even if just for one night…) Event Details and Tummy Rumbling Menu…

The Good News. Bravo to Beard. Keep the vegan dinners, meatless Monday menus and perhaps even raw/vegan dinners coming. Green food is in! In case you haven’t heard…

The Bad News. So for all you excited vegan foodies out there, the event is next Wednesday June 9th and costs $165 if you’re not a Beard Member. Which I am not, sadly. So I don’t think I’ll be grabbing my tickets. But it is terribly tempting!

Wednesday, June 9, 7:00 P.M.
Sensational Spring Vegan
Through the inventive cuisine of Horizons in Philadelphia, Richard Landau and Kate Jacoby transform meat lovers into vegan believers. The talented duo returns to the Beard House after an awe-inspiring performance in November to thrill more fans with their take on summer’s bounty.

…yum and YUM!!! My tummy is growling.

Lots of spicy horseradish on this menu-love it! Horsradish was my secret ingredient in last week’s Black and White Panini… 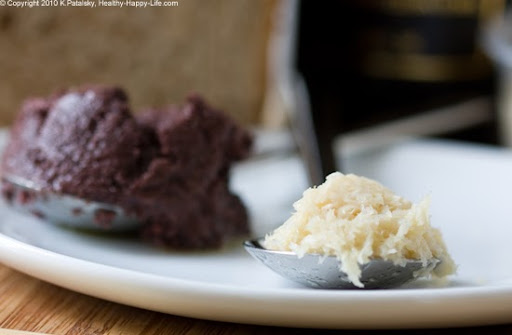 Read more about the Horizons Restaurant on their website.

Tweeters: Retweet this blog post and @reply the @BeardFoundation if you want more vegan and green dinner offerings at the House.