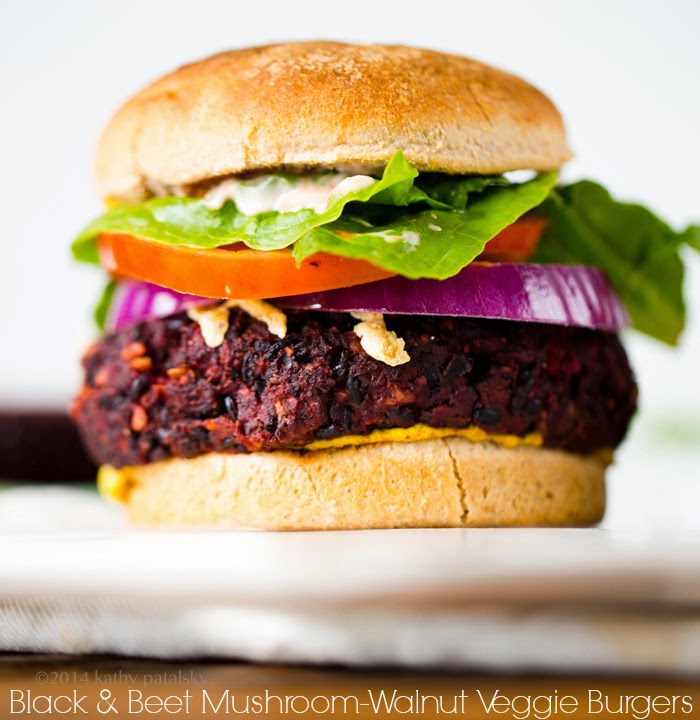 This oversized, thick and bold veggie burger is perfect for anyone who craves a burger bash! Bring on the burger toppings, my Black & Beet Mushroom-Walnut Veggie Burgers recipe ahead.. 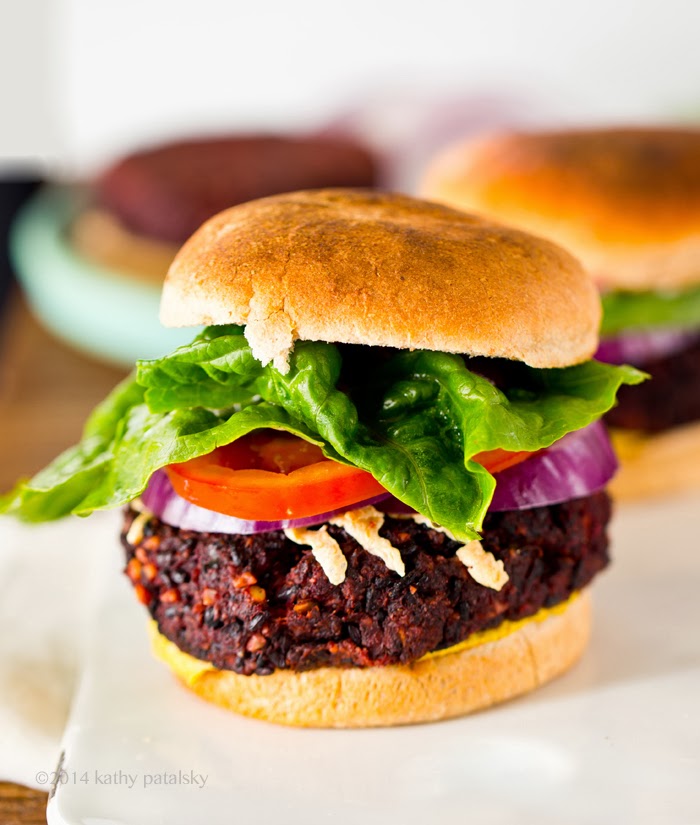 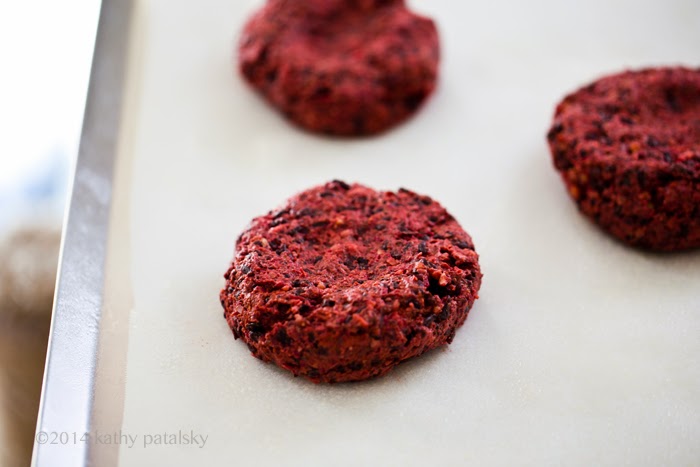 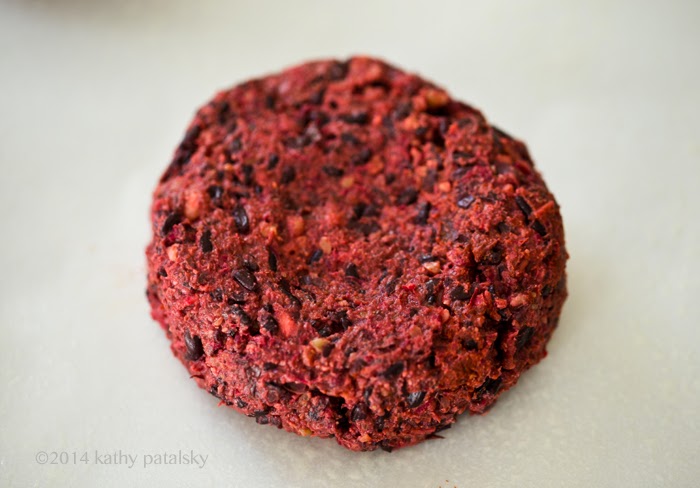 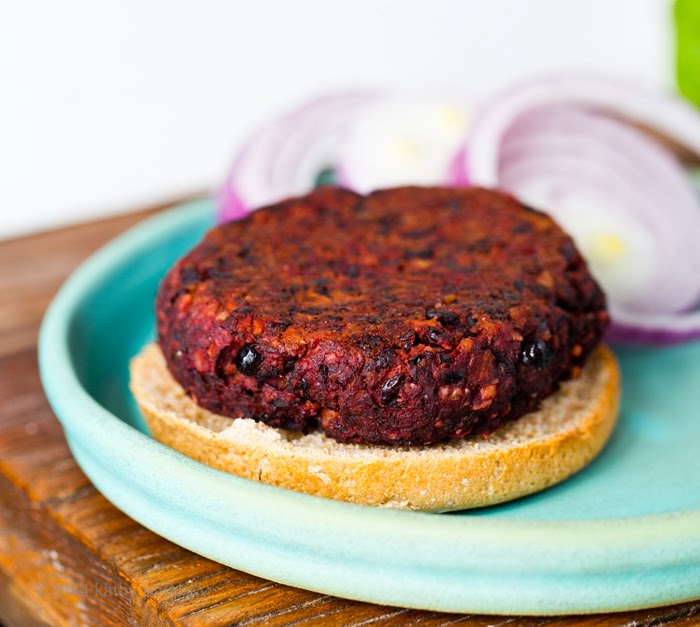 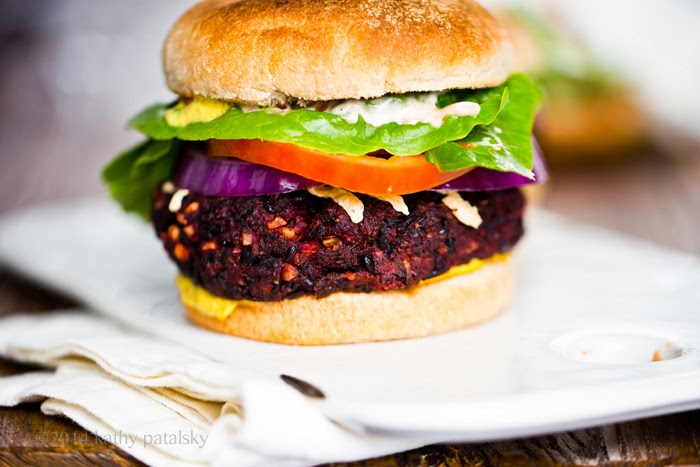 Burger bash is on.. 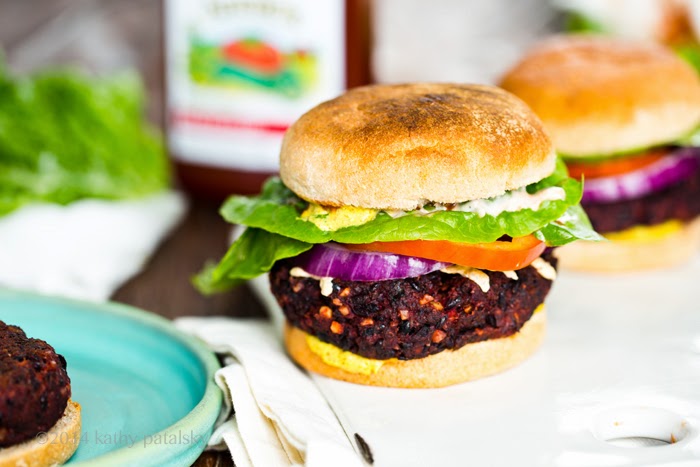 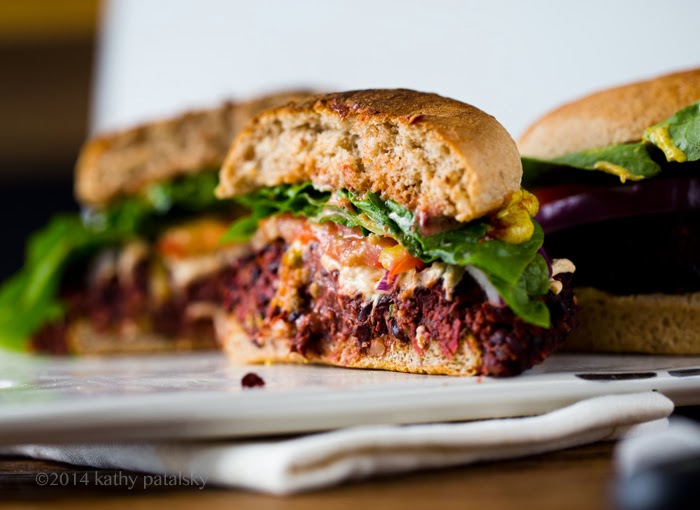 Last week I went to an awesome baby shower. It was a rainy, stormy, cloud-covered, grey day. The type of day where all you really want to do is curl up under a blankie and sip hot cocoa while watching old movies. But also the type of day that makes going out, venturing into the mess of bad weather a sort of challenge, making the destination somewhat magical once you get there. And it was. Being inside a warm and cheerful home filled with loads of friendly faces was perfection. Now this wasn’t your typical, throw all the guys out so all the girls can get high on estrogen and gush at the sight of tiny pink baby clothes and the sweet mommy bump. Sure that all kinda happened anyways, but the guys (and puppy dogs) balanced things out quite nicely. See, this was a “beer & burgers” BBQ style baby shower. Totally guy approved. However, not vegan approved. Which was totally fine by me, I was perfectly happy sipping mugs of almond-milk infused hot lemon-Zen tea and nibbling veggie sticks, hummus and crackers. But the burgers were everywhere and everyone had a burger-filled plate. It was hard to ignore the sight of them, really. So I had to stare a bit and ponder one thing..

HOW COULD I MAKE THESE EXACT PLUMP, BLACK-N-PINK, JUICY BURGERS IN A VEGAN VERSION?

You know me. Always secretly veganizing. I see a food that people WANT and I want to stand up and shout, oh my goodness I could TOTALLY veganize that for you if you give me a shot! But obviously I’m not THAT kind of girl at a baby shower. So I quietly ignored the featured entree and prepared to veganize for my next veggie burger feast.

I noticed that the burgers had black spots from the charcoal BBQ-ing, they were textured and bumpy and the tones ranged from black to purple to brown and pink and red. OK, ok sorry hard core vegans, I do not mean to get so meat-detailed but this is important!

I call this creation “The Contender” aka my Black & Beet Mushroom-Walnut Veggie Burgers. These plant-based babes could easily be placed in the ring with any beef-y burger.

These burgers contain a few black ingredients to give the burger appearance some depth. Black rice and black beans. I find that pink beet burgers do not usually have the tone and color contrast to look like a classic non-vegan burger, so the black helps there.

Oh, and I know some vegans hate it when bloggers try and create VEGAN recipes that LOOK LIKE MEAT. And I am normally not a big fan of that idea either. BUT the whole point of this is that I wanted to create something that I could actually set on a party table right next to the meat option and maybe someone would be so interested by the similarities of the two, they just might give the vegan version a try. And the best part about this burger is that it is made using WHOLE foods. No processed soy or TVP. Just whole, good, healthy ingredients like beans, walnuts, rice, seeds, spices. So dive in or serve up a platter of these burgers at your next burger bash. 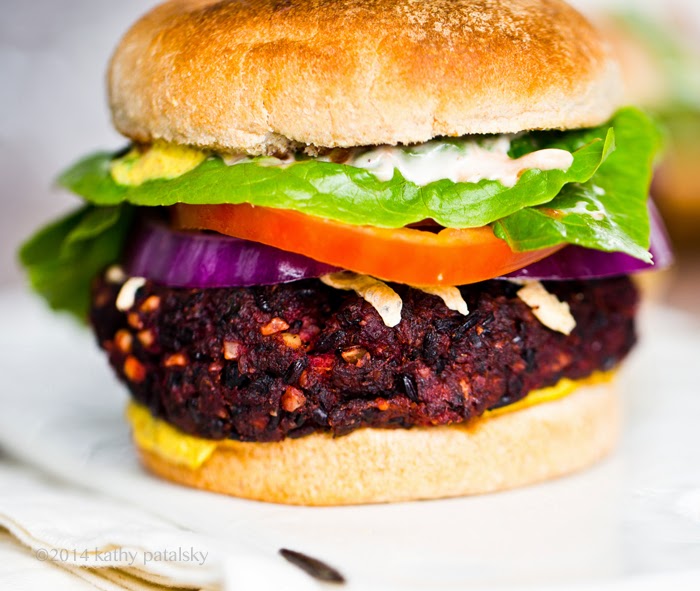 1. Preheat oven to 375 degrees. Line a baking sheet with parchment paper or grease the pan. I use coconut oil.
2. You can do this step beforehand for easiest prep: cook black rice. I use about ½ cup of rice and 1 cup of water or veggie broth. Add a pinch of salt if using water. Cover with lid and bring to a boil, then reduce heat to a simmer for about 25-35 minutes or until rice is tender. Check on the rice about 20 minutes into cooking and add another splash of water if you the rice looks a bit too dry.
3. In a large mixing bowl, add the rinsed beans. Mash them well with a fork.
4. In a blender or food processor, process the walnuts until they are crumbly and powdery. Add them to the mixing bowl.
5. Process the shiitake mushrooms the same way you did the walnuts, only the mushrooms with just be very crumbly, not powdery. Add them to the mixing bowl.
6. Add the cooked rice, beets, spices and all other ingredients for the veggie burgers to the mixing bowl. Start mashing with a fork and fold for about 5 minutes. You really want a very mashed and thick consistency.
7. You should be able to directly handle the mixture and form into patties. If the mixture is too wet you can either fold in a bit more walnuts, a spoonful of oat flour or you can place the mixture in the fridge to chill up a bit. If the mixture is too thick for your tastes, you can add in a tiny splash of veggie broth, until it thins out a bit.
8. Form patties and place on the baking sheet.
9. Spray or brush the tops of the patties with coconut oil or EVOO. (optional – adds a nice crispness to the tops.)
10. Bake patties at 375 for 25 minutes. Cool a bit before transferring to buns. Serve with any burger toppings you’d like! 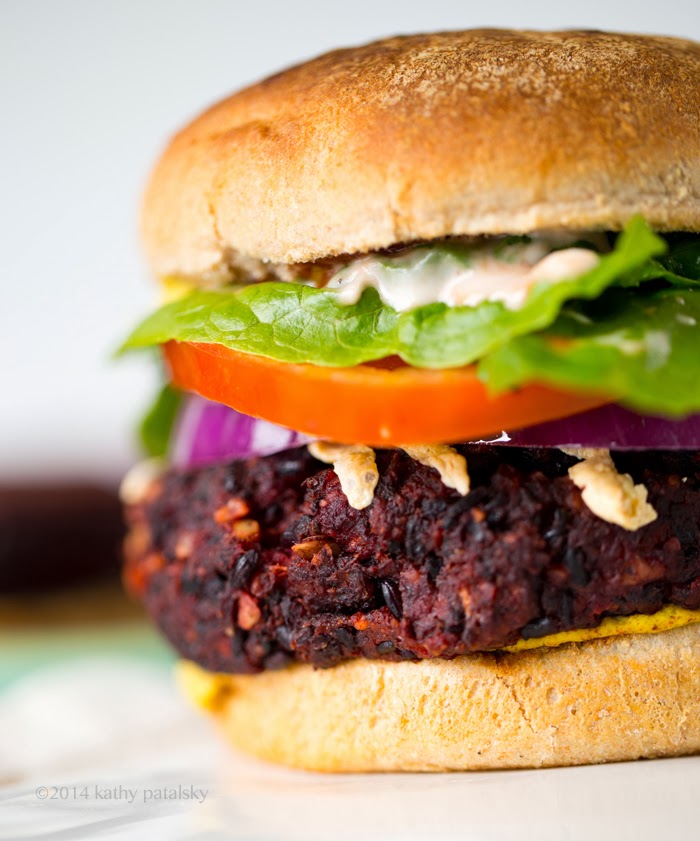 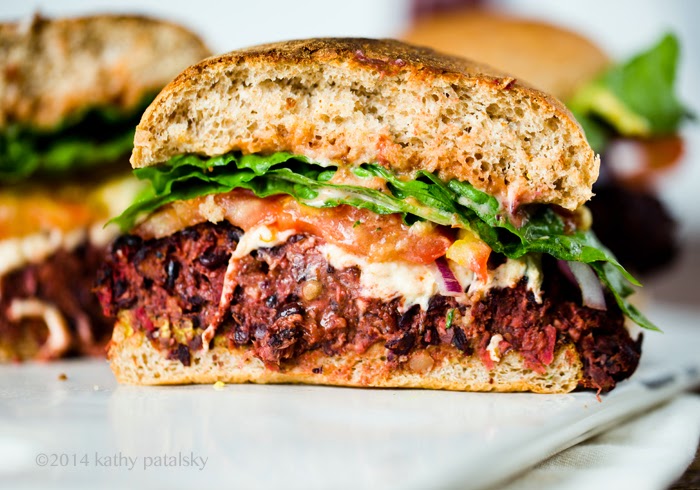 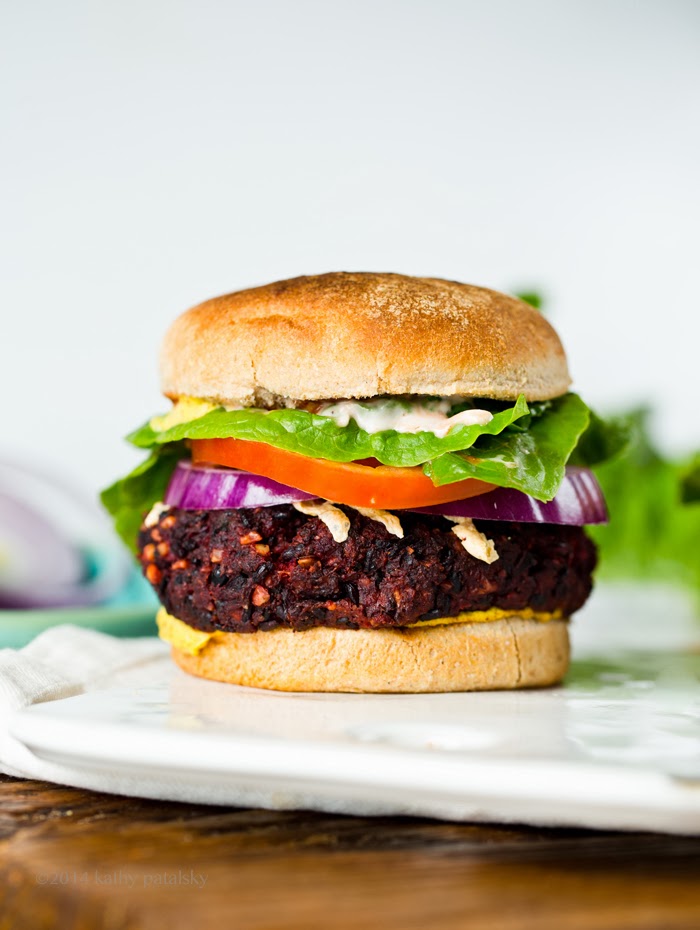