Home » This and That » Christian Bale, Another Angry Celeb. Now is that Healthy??? 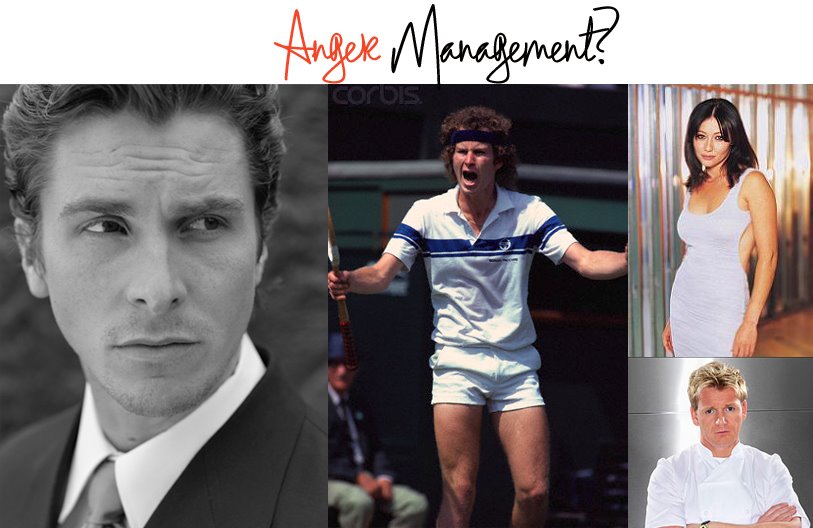 Maybe it’s a slow news day or maybe anger is a human emotion that we can all relate to. But the audio of Christian Bale ranting on an assistant director on the set of his new movie has been echoing around the Internet for the past few days. The ladies on The View discussed the video today. Whoopie said she herself has “gone off” on people on set. Both she and Sherry admitted that it is incredibly distracting when people walk through a scene.

So what do you think? Does Christian Bale have a severe anger management issue, or is his anger rant a good, heck even healthy reaction to frustration?

Celebrity Trend? Christian is not the first celebrity to ‘lose it’. What about tennis star John McEnroe, who made a career out of yelling at the umpire? Who else? Let’s discuss, and take a look at a few Ramsey and McEnroe ‘angry rant’ videos….

Is Christian taking anger too far by screaming on the job, without restraint?

He’s not the first celeb to make anger headlines.

Alec Baldwin’s voicemail where he screamed at his young daughter, Ireland, was headline news for a long time. But the public forgave Alec, and even embraced his celebrity status more after the incident. Hmmmm?

Remember Russel Crowe chucking the phone at the hotel desk clerk at the Mercer Hotel in NYC? And any tennis match with McEnroe was sure to have some screaming involved. And Shannon Doherty yelling at everyone on the set of 90210 and Charmed. And have you seen Hell’s Kitchen?

Is venting your anger healthy? Or appropriate?

ABC News reported that a study out of The U. of Michigan found,
“Couples that suppress their anger when they have been unfairly attacked, either by the spouse or someone else, are twice as likely to die earlier than persons who admit they are angry and deal with their problem.

The study adds to a growing body of evidence that suppressing anger can be deadly because it drives up blood pressure and contributes to anxiety and depression, but this study takes it a bit further. If one spouse suppresses his or her anger, that individual is likely to die earlier. But if both spouses suppress their anger, the odds go through the roof.”

So this first study about married couples says that venting is healthy and in fact increases years of life.

However this next expert, author of the book Anger Kills… says this:

“Mind-body researcher Dr. Redford Williams, in the department of psychiatry at Duke University Medical Center, said that venting your anger is, in fact, quite unhealthy. With his wife, Virginia, Williams has written two books on anger management: “Anger Kills: Seventeen Strategies for Controlling the Hostility That Can Harm Your Health” and “In Control: No More Snapping at Your Family, Sulking at Work, Steaming in the Grocery Line, Seething in Meetings, Stuffing Your Frustration.”

When you vent your anger, “your blood pressure’s going up more, your adrenaline levels are going up more. You’re nicking those arteries a little bit more,” Williams said.”

Here’s what I think:

I used to have a boss who loved to yell. It wasn’t that she was a bad or even mean person, she just communicated her best when she was screaming at the top of her lungs. She loved to get all worked up and run through the halls yelling. She didn’t necessarily yell at someone though. It was more a personal internal rant. An this is where I think we must draw the line with anger.

ARE YOU YELLING AT OR AROUND SOMEONE.

If I want to yell and rant and be myself worked up about something, while venting to someone, that is not personally attacking anyone. But when your angry rant turns into a personal attack in a way where the other person is retreating, you have to pause and in my opinion, stop.

But like I said, Gordan Ramsey screams at chefs he is teaching, and most of the time they only respond with a “yes chef.” and John McEnroe, screaming at the referee usually never gets a ref to scream back. But then again, the ref is perched on a high chair and has ultimate power over Johns game results.

So a little venting, even a lot of venting is in my opinion a good thing. You should be able to tell if you vent is making you feel good or feel sick. If you are making yourself sick with anger, you’ll know. If it just feels good to get mad, you’ll know.

Here are my rules of the angry road:
1-Always try to take a few deep breaths and take yourself away from the angry situation, as a first reaction to your feelings.
2-Try to calmly express yourself to the situation or person that upsets you.
3-Close your eyes, again, deep breaths, center yourself. Think ahead to your next project, movement, anything to take your mind off the situation.
4-If you are angry and can’t move on, you may start to rant. If you rant, make sure that you are communicating why you feel wronged. And not attacking someone in an abusive and unproductive way.
5-Do not attack anyone who is either unable to defend themselves verbally, does not want to participate in the situation (trying to walk away), does not understand why you angry, does not expect or deserve to be judged by you or is in a lower state of power than you.
6-never let your anger turn into a physical expression.

Here’s a classic John McEnroe yelling at the referee clip from YouTube: