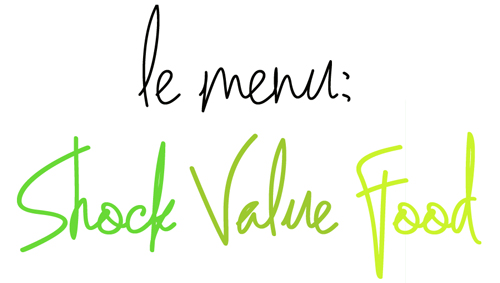 There is a disturbing trend on the foodie horizon. Even the New York Times Style Section is buzzing about it, and it’s not pretty my friends….

And the trend extends to television shows like Travel Channel’s Man v. Food, where the host attempts food challenges like eating a thirteen pound pizza. And Bizarre Foods with Andrew Zimmern, where the host seeks out and eats the world’s most bizarre foods.

Athletes are even jumping on the shock value bandwagon with the Krispy Kreme Challenge, a race which involves eating a dozen donuts mid-race.

There is even the shock value restaurant in Arizona called: “Heart Attack Grill.” With its Quadruple Bypass Burger, featuring four burger patties on one burger.

And now the online foodie recipe community is embracing the trend:

The most emailed story on The New York Times?

“Take Bacon. Add Sausage. Blog.” It’s too disgusting to describe, but it’s basically one of the most unhealthy meat recipes I’ve ever seen.

Whenever a new trend hits society it is common to ask why? My review? Many people are turning to fast food in recent months. Fast food chicken eatery Chick-fil=A boasted a 12% profit increase last year.

So, if you’ve just eaten a Whopper or served your kid a Happy Meal, it might make you feel a bit less guilty to see a guy chowing a thirteen pound pizza. Or read about America’s Worst Drinks, like Baskin Robbins Large Oreo Shake at over 2600 calories…

In the long run, this trend is not a good one. The media should be focusing on stories about how to eat healthfully and deliciously in tough economic times.

Splattering images of the Angry Whopper all over the place only makes people more apt to think:

Well FYI, I am not turning to fast food, and most healthy eaters I know are even more passionate about staying healthy these days. Shock value food is not lending anything positive to society, and we are becoming very desensitized to food portions in America.

It still shocks me when I see the huge portion sizes at popular sit down restaurants like Cheesecake Factory, and no one bats an eyelash. Lots of food is so commonplace in the USA. When you travel to Paris or eat out at a gourmet restaurant like Le Bernardin, and you will be shocked by the smaller portion sizes!

…the salad appetizer at Le Bernardin, now that is some shock value food I can embrace.