Home » This and That » Dita Von Teese: PETA’s Fur Contradiction

I recently discovered that one of PETA’S celebrity endorsers, Dita Von Teese, has her own fur line and is quite open about it. If fact PETA, apparently has no problem working with Dita even though she wears and sells fur. Am I the only one who thinks this is upsetting?

Lets define, shall we…

Contradiction (noun)-variance to something
PETA– People for the Ethical Treatment of Animals.

Fur– Not an ethical treatment of animals.

Don’t celebrities and organizations value the quality of authenticity anymore? Authenticity is pretty simple: If you talk the talk, walk the walk.

Like most vegans, I am an animal lover. In fact, my first inspiration towards veganism was out of my childhood love of animals. And I support people and organizations who promote animal rights. But sometimes PETA confuses the heck out of me. 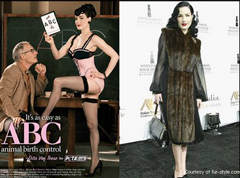 Numerous news outlets reported that Dita Von Teese was spotted having a vegan lunch at Real Food Daily in Santa Monica California. One of my favorite restaurants in the country might I add.

This brought up a huge history of Dita’s work with vegan animal rights company PETA. And the background story is quite questionable. It begs the question: Is PETA being a hypocrite?

The Vegetarian Star reported this:

“Von Teese worked with PETA in a campaign to encourage pet owners to spay and neuter their animals and was also set to star in a Beauty Without Cruelty campaign in cooperation with Chanel, to show how animal cruelty was unnecessary in the cosmetic industry.

But she has a collection of vintage furs she’s not ashamed to discuss.

“PETA’s totally aware of me,” she once told PEOPLE. “I’m not working with PETA to tell people to be vegetarians or to stop wearing fur. I am there to strictly speak about spaying and neutering your pets.”

PETA had responded by saying, “She said she has some vintage furs she wears occasionally. PETA often works with a celebrity on an issue they feel comfortable supporting, whether it’s supporting spaying and neutering, or speaking out against products that are tested on animals. So they may not be an animal rights activist, but their contribution to any of our campaigns is appreciated.”

I am against fur, but I certainly wouldn’t take away Dita Von Teese’s right to wear or sell fur. I can only do my best and snarl at all the fur coat wearers this time of year in New York City.

Dita is her own person, and is open about her fur-accepting stance.

However, PETA runs across runway stages splattering red paint on fur wearing models. So how in the world can they dare work with someone who sells and wears fur???

I wish PETA would not choose its celebrities based on popularity, but rather on cold hard facts about what they represent. So many celebrities and everyday people say they represent one thing and actually LIVE something totally different. I would like to see more authenticity in PETA’S celebrity endorsers. Anyone can pose naked for a PETA ad and make the news. But if at the end of the day you are eating a hamburger while draped in a mink fur coat, I say you are nothing more that a fake. And if PETA was too blind to see that, then they are just as bad.

Authenticity is a pretty simple concept: If you talk the talk, walk the walk.