Home » This and That » The Economic Value of Health: Eat Healthy, Save Money

If I hear one more person give the excuse that “it’s too expensive to eat healthy.” I’m going to scream. OK, not really. But I want to take a minute to vent about the economic value of health.

The media has it a bit backwards on in their reporting of the association between your budget and your diet. Headlines proclaim: “More and more Americans are turning to fast food to save money in these hard economic times!” 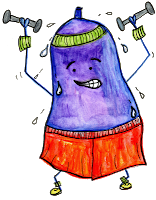 ….well it’s true that eating at McDonald’s may save you a few bucks at the end of the day, but what about those long term health and economic outcomes? Fast food can become a habit, prevent you from losing weight, lead you to gain weight and in turn – lose health.

The real facts? If you eat healthy, exercise, watch your stress levels and in turn maintain a healthy weight, you can actually save money long term.

Click ahead for the top five financial costs associated with American obesity….

FACT: The obese are more susceptible to an array of health problems, such as hypertension, type 2 diabetes, heart disease and stroke.

FACT: Johns Hopkins Bloomberg School of Public Health came out with a study published in the July issue of Obesity, that concluded that unless our eating habits or exercise habits change, 86 percent of the American population will be overweight or obese by 2030.

Here are the top five costs associated with obesity,
as reported in Newsweek Magazine:

1. Lower wages:
Stanford University researchers found that obese men and women earn, on average, $3.41 per hour less than their peers. That means $7,093 in lost income per year. Employers tend to pay obese workers less when they’re footing the bill for their insurance..

2. Fewer work hours:
On average, obese workers tend to lose a week of work a year due to ailments related to their weight, according to the National Institute of Diabetes and Digestive and Kidney Diseases.

4. Extra air travel costs:
Budget airlines such as Southwest require obese people or people who may take up more than one seat to buy an adequate number of seats on the flight.

5. More gasoline:
More weight burns more gasoline in cars. A 2006 study published in the journal The Engineering Economist found that Americans pumped 938 million more gallons of fuel a year than they did in 1960 because of their heftier frames.

Last Word from Kathy: Veggies and grains are cheaper than most animal/meat products. Soy milk can be cheaper than dairy milk. And eating less, can mean less food to buy. Junk food extras like chips, bakery goods, cookies and soda are usually more expensive than staple healthy items like apples, peanut butter and whole grain bread.