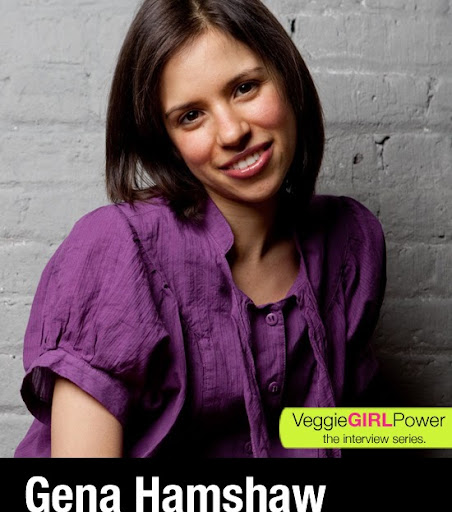 I’m kicking off my 2010 Veggie Girl Power interview series with the talented Gena Hamshaw. Gena is a clinical nutritionist, a book editor and author of the popular blog Choosing Raw, where she encourages a semi-raw foods and animal-friendly lifestyle. Four words to describe Gena: vibrant, fun, real and smart. Get to know Gena!..

Meeting Gena. Although I just met Gena a few weeks ago, I feel like I’ve known her for years. I love how there is usually an instant bond between veggie ladies, and meeting Gena was no exception. Plus we are both NYC-based vegan food bloggers.

Gena and I spent a few days in LA together at the Dole Food & Wellness Blogger Summit, and became instant friends. I realized how alike we were when Gena confessed to me that she told the travel agent that she didn’t want to sit next to me on the flight over because “what if we didn’t like each other!” Ironically, I was thinking the exact same thing about her. (ha!) I’d now gladly share an airplane row with Gena any day of the week.

From Gena, I’ve learned to look honesty in the face, get a good laugh out of it, and maybe even learn something from it.

Gena’s VGP Spirit. Gena is a smart, strong, hilariously engaging, charismatic, beautiful veggie girl who I am proud to feature. I simply love meeting someone like Gena who is anything but ‘quiet’. Get to know Gena… 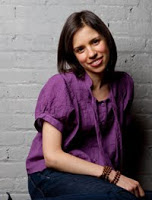 Gena: Water. Then coffee. Are you shocked I didn’t say green juice?

Gena: Too many to name! But I would be lost without nutritional yeast, tahini, Justin’s individual packets of almond butter (great for work and travel), shelled hemp seeds, and Vega’s Whole Foods Optimizer in the Vanilla Chai flavor. I’m also pretty partial to Vega bars.

Gena: Again, too many to name! In terms of my foundational ethics as a vegan, I owe a lot to Peter Singer. Vegans who have been studying animal rights issues for a long time inspire me, too, and in that category I’d have to say that my boyfriend is pretty damn inspiring.

Culinarily, I adore Ani Phyo, Sarma Melngailis and Kristen Helmstetter. They’re talented, enthusiastic, and outspoken about veganism in the best and most positive of ways. I’ve learned a lot from Dreena Burton, and hope that, if I ever have a family, I’ll be as inspiring a vegan mom as she is. I don’t think I’d know half of what I know about vegan cooking without Isa Chandra Moskowitz and Sarah Kramer, so they’d go on the list, too. Susan of FatFree Vegan Kitchen is remarkably talented.

As a blogger, I’m constantly inspired by the company I keep — vegan AND omni. To list blogger friends would take forever and inevitably exclude too many, but suffice is to say that being part of the food blogging community is constant motivation to keep improving myself and what I do.

Gena: I always say it was a combination of health, personal psychology, and ethics. The first two motives came first. Ethics entered the picture later and quickly became the animating force of my veganism when they did. I suppose it would be right to say that I became vegan for health and peace of mind, and I’ve evolved as a vegan–and intend to remain a vegan–because of compassion.

Gena: I’m actually not much of a snacker! More of a giant meal eater. But I do tend to love juice pulp (what’s leftover from juicing) mashed with avocado, lemon juice, and salt. Yum.

Gena: Veganizing my wardrobe and personal care products was the hardest part, and I’m actually still evolving in that department — I haven’t yet mastered clothes shopping as a vegan, and I work on it a lot.

The food part was easy, mostly because veganism truly does appeal to my tastes (there’s no food that I “miss”) and because I’m comfortable being outspoken–I never experienced a sense of social discomfort announcing my choice.

Gena: “Know thyself.” It’s been ascribed to too many dead Greek people for us to attribute it properly, but who cares? Words to live by.

Gena: Usually I’m far more angered on the inside than I’ll let on. I have strong reactions to negativity that’s ignorant or wrongheaded, but I also try to remember that embittered dialogs don’t accomplish much. My main goal is to see vegans and non-vegans having productive and enlightening conversations with each other, and I consider it my duty as someone who writes about veganism to always turn a negative remark into an opportunity to set a good example.

I also try not to let any strong opinions of mine–and believe me, I have them–cloud my sense of fairness, especially when I’m dealing with people who simply have no cultural context in which to examine veganism with an open mind.

It’s also important to remember than 99.9% of the criticism one receives as a blogger–at least, ignorant and nasty criticism–is a reflection of the emotional life of the person hurling insults. Truly content people don’t typically feel compelled to make small-minded attacks.

Gena: Well, passion is the message I try to project most! I’m passionate about veganism and about self-care, and I try to share that with others–it’s what my blog, Choosing Raw, is all about. I’m also passionate about setting a confidant example for other women, especially young women. I realized early on as a vegan that more women I knew tended to have a hard time embracing veganism because they were concerned about how it would be socially received, or about how their boyfriends and family members would react.

I try to show my women readers that it’s healthy and important to embrace an identity that’s in keeping with one’s own beliefs, even if it’s occasionally at odds with the world views of the people around you. Ultimately, any loved one of yours should support and respect your values.

Gena: Wow. Way to force impossible choices upon me, Kathy!

I’d also want to show some love to Jenny Brown at the Woodstock Farm Animal Sanctuary, to Chloe Jo Berman, to Ginny Messina of the Vegan RD (http://www.theveganrd.com/), who has written some superb explanations of the science of vegan nutrition lately, and to Veg News columnist Laura Beck, for being sassy, smart, outspoken, and a fabulous example of vegan ardor.

Gena: By avoiding the buffet table?

No, seriously: holidays aren’t too rough for me. I always come to cocktail parties with a snack, so that I’m not feeling left out if there are no crudites. And my friends and family all know and respect my choices, so I usually have a vegan option wherever I go.

And if I don’t? Big deal. I can eat when I get home. The holidays are, let’s remember, not only about food: they’re about good company and good spirits, and one night without a cornucopia of vegan options is hardly going to dampen my mirth.

Hear more from Gena on her blog: www.ChoosingRaw.com

Gena and I at the DOLE Summit… 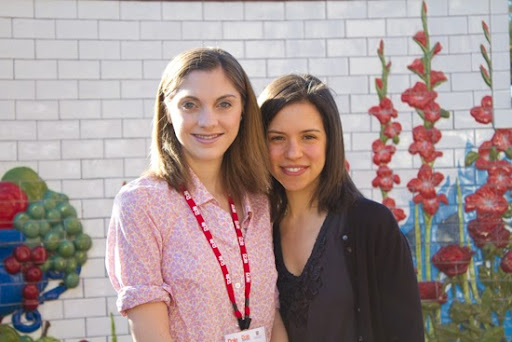