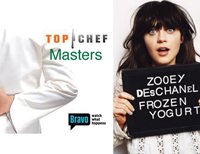 The elimination challenge on last night’s episode of Bravo TV’s Top Chef Masters featured Zooey Deschanel. The challenge was to cater a dinner party for 20 guests-and the food must be vegan, soy free and gluten free. I was shocked to see the world’s top chefs emotionally crumble when they heard the dietary restrictions for this challenge. Shocked! And there were a few incredibly annoying quotes (and gestures) on the show. One example was from food critic Gael Greene who said this ignorant remark: “I thought it was very elegant, a wonderful opening. The vegans seemed so surprised-God knows what they get to eat.” -Gael Greene, Insatiable Critic

Poor Little Vegans. Ah yes, those poor pitiful vegans chowing down on green mush and cardboard crackers. Poor little things. But really Gael, your sympathy is not needed. I nearly burst out of my seat when I heard Gael’s statement last night on Bravo. And I have compiled ten more annoying quotes from last night’s show. But before I go on, I want to give a gold star shout out to Rick Bayless and Hubert Keller, both of whom performed the entire task without throwing even a smidgen of a “5 yr-old style tantrum outburst”. Most of the other chefs had their tantrum moments about the ‘vegan/allergy’ part of this meal. Come on guys. A real chef can cook for any diet. Anytime, anywhere, under any circumstances. Here are my top ten annoying quotes from the show (And my favorite positive remarks from the fabulous Rick and Hubert)…

“In my experience of vegan food it tends to be a symphony of beige.” -Jay Rayner, judge

All vegan foods are beige? Really? I don’t think so. This was just one of the absurd statements from last night’s Top Chef Masters. Well Jay, this vegan fennel citrus salad is certainly not beige: 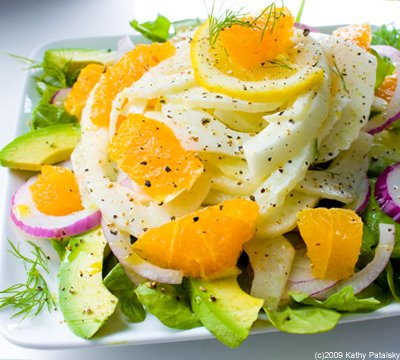 10. Not actually a quote, but a gesture: When Chef Art Smith pounds his fist on the table in angst after hearing that ZD is a vegetarian.

9. “I’m trying to do something that I have kind’ve a clue how to do.” -Art Smith, chef. on his decision to do the dessert course of the meal. But Art, are you really saying that you can’t cook an appetizer or entree for a vegan with special allergies? What if Zooey walked into your restaurant. Would you kick her out? Anyways…moving on…

8. “Zooey’s diet goes like this: think of the things you like to cook and just say no….it’s all about no’s. It’s off-putting to say the least.” -Michael Chiarello, chef. What? You don’t like to cook the season’s freshest produce? Delicious grains? Legumes? Come on. Dramatic much?

7. “I’ve only done one other vegan meal in my entire life and it was for the first lady, Hillary Clinton at the time.” -Michael Chiarello. One vegan meal ever?! Hard to believe. And is that really something to brag about in the culinary world? I really hope not.

6. “No one ever cooks for me!” -Zooey Deschanel, guest of honor. Come on Zooey-there are hundreds of awesome vegan chefs and restaurants in LA, NYC, SF and all over the world where a chef could serve you an amazing meal.

4. “It’s so rare that I get to eat anything other than raw vegetables so…I’m so happy.” -Zooey. What? Zooey, don’t perpetuate that horrible myth please. Such a silly statement!

3. “I didn’t want to over complicate the dish. I’ve got brown and brown.” -Anita Lo. A few colorful veggies could’ve brightened up your plate, not ‘over-complicate’ it. When I recently tried the colorful 19-ingredient Singapore Slaw salad at restaurant Shang, it was a symphony of color, not a smidgen of over-complication. (Just a symphony of bliss and flavor).

2. “I bought an organic rice milk. Frozen…..I’m not going to make something I don’t know how to make, I don’t have a recipe for.” -Art Smith. Uh, you improvised the vegan brittle didn’t you?! And that was a hit. Excuses, excuses Art. You are so talented! You could’ve done better than soupy melted Rice Dream with fresh strawberries…

1. “In my experience of vegan food it tends to be a symphony of beige.” -judge Jay Rayner. Sigh. Sigh. Sigh. Yes, so many beige apples out there. And I adore beige fennel, beige arugula and beige pomegranates. But the best are those beige avocados. Super cool, eh.

And the bonus worst quote of the entire evening came from food critic Gael Greene who said this ghastly, insulting and ridiculous statement:

“I thought it was very elegant, a wonderful opening. The vegans seemed so surprised-God knows what they get to eat.” -Gael Greene, Insatiable Critic

But it wasn’t all annoying last night. Thanks to Rick Bayless and Hubert Keller. My favorite quotes of the night below…

“In the Mexican repertoire there’s a lot of super delicious things you can do with vegetables and beans and grains and all that sort of stuff. So I can do this thing.” -Rick Bayless

“Rice ice cream? Bad choice, bad choice.” -RB. I sooo agree. Go with the coconut based stuff Art! Any vegan (or foodie) would know this.

“This is fresh corn tamales with braised black beans, they have ancho chile and a (?) chipotle type chile and braised greens. Pleasure being able to cook for you all!” -RB. So yum. So gracious. Genuine guy. Super classy chef.

“Traditional Mexican food has a lot of vegetable dishes in it.” -RB

Hubert Keller is too Cool (and Talented) Quotes:

“Besides vegan, I do vegetarian at the restaurants for many many years-so I should be good.” -Hubert Keller.

(desrcibing the soup on his plate) “White gazpacho with cucumber, almonds, rice milk.” -HK. Yum! Any extra for me??? I heard you always make extra. Smart.

Thank Rick! Retweet this post and tell Rick Bayless how much you love him. He tweets on twitter! @Rick_Bayless
He also has a cool blog devoted to his Top Chef adventure: root4rick.