The homemade crust, using my pizza dough recipe is super easy to make and bakes up light and bubbly with crisp edges. I dust the bottom of the crust with some corn meal and the edges with vegan parmesan.

Vegan pizza is such a fun and easy eay to DIY a family meal! I hope you can give this recipe a try…

For the best Homemade Vegan Pizza, you should experiment with learning how to make your own crust. Making pizza dough is easier that we all think!

Sure, it takes a few hours of planning ahead of time – for the dough to rise – but the actual time of hands-on work is very small. Usually under 15 minutes. And if you have a stand mixer, even less!

I love to brush my pizza crust with a bit of EVOO before adding sauce and toppings. I also love a bit of corn meal on the bottom of the crust and some vegan Parmesan along the bubbly edges.

I usually love using double zero ’00’ flour for my homemade vegan pizza, but this time I simply didn’t have any on hand so I used a basic all-purpose flour. And the results were perfect! I actually didn’t miss the double zero flour at all. Interesting! You can basically use whatever flour you have on hand. Bread flour. All purpose. And if you are savvy about gluten-free flours, you can give that a try.

Today, I modified this recipe in the NY Times for Roberta’s pizza dough. It calls for “00” flour, but I made some tweaks and only used AP flour.

I have a lot of fave pizza toppings. Give me the chance and I could easily add 5-10 veggies/toppings to a pie. But you don’t want to over-do toppings and weigh down your pizza. So choose wisely! Here are some of my faves….

You can see the ingredients I chose today on these pizzas and in the recipe below. But basically I love a few super salty ingredients (olives or capers…) and then some earthy veggies like the bell pepper or some leafy greens or mushrooms etc. And sometimes, a sweet accent like BBQ vegan chick’n or pineapple rings.

What About Vegan Cheese?

Well I did a pretty extensive ”vegan pizza cheese’ review a while back. I should probably update it because I had such success with this Violife Mozzarella that I used today. Have you tried Violife yet? I’m loving it! I also loved Miyoko’s Mozzarella, which you can slice into rounds or shred.

For homemade vegan pizza, you have three options for pizza sauce:

The difference between pizza sauce and marinara sauce is usually two things: the consistency and the sugar. Pizza sauces are a bit thicker – less watery or oily and they contain a bit more sugar for some slight sweetness.

Personally, I actually love either making my own or using basic marinara sauce on my pizzas. For these pizzas I used a portobello mushroom marinara sauce by Whole Foods. It’s only around $2 and has great flavor!

This pizza dough works with any thickness you’d like! For my homemade vegan pizza, I personally like a thinner inner crust and then some bubbly thick edges. But whatever you prefer can be used! You can see I made two pizzas with this dough – one thinner and one thicker.

How Much Sauce on Vegan Pizza?

Again, add to your preferences! I like a little more, but not too much to make it ‘soggy.’ 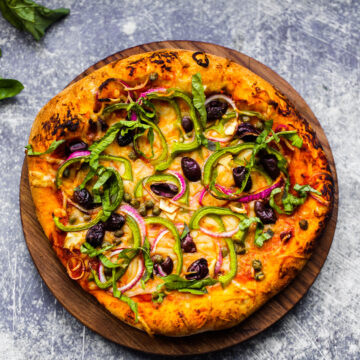