Home » This and That » Is Your Beer Vegan??? Guinness isn’t. Corona is. 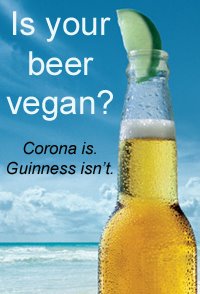 Every St.Patrick’s Day, millions celebrate by downing a tall frosty glass of Guinness Stout. However, I’ll bet many of those beer-guzzlers don’t know that the beverage they are drinking is not vegan. Is your beer vegan?

It’s true. Both beer and wine are sometimes processed using animal by-products including gelatin, casein, glycerin or in the case of Guinness – isinglass. Isingglass is a by-product of the fishing industry.

Guinness’s statement on the matter:
“All Guinness brands are free from animal matter. However, isinglass, which is a by-product of the fishing industry, is used as a fining agent for settling out suspended matter in the vat. The isinglass is retained in the floor of the vat but it is possible that minute quantities might be carried over into the beer.“

Rule of thumb: Vegans should avoid British beer and choose German or Belgium beer. Generally, British beers use isinglass, gelatin, glycerin or casein. German and Belgium beers using traditional methods of brewing are vegan. Hooray for “purity laws”. They rule that only the ingredients of water, grain (barley or wheat), hops and yeast can be used in German beer. Belgium beer as well.

Personally, I’m a wine lover, but this beer ingredient info carries over to the wine industry, thus both vegan wine and beer drinkers should be informed.

Good news is… There are plenty of beer brands worldwide (German, Belgium and beyond) that are indeed 100% vegan. Click ahead for a list of vegan and not vegan beer brands…

If you are a hardcore veggie like me, you may want to rule out Guinness and all of Britain.

For a more specific breakdown…

Wow Barnivore.com has an amazing database of beer brands labeling which are vegan, mostly vegan and not vegan.
Click here for their complete beer database.

WINE:
Worried about your wine being vegan?
Check out a nice vegan wine database here.