This vegan Mushroom Stuffing is packed with tender mushrooms, veggies and vegan sausage too. Super flavorful and moist from all those earthy shrooms. Whip this up in under an hour and enjoy festive holiday stuffing whenever you crave it!

Mushrooms for the Holidays

I always want to serve more mushrooms at my holiday table. And while I adore my Mushroom-Chickpea Tart this time of year, I wanted another option. This time I went all in on mushroom stuffing. Not just a few mushrooms, a huge helping of them. combined with classic stuffing ingredients like celery, onion and poultry spice, this stuffing is everything you want it to be – and nothing more. Did that make sense. Like you get all the amazing stuffing flavors, minus the animal products.

Get my other vegan stuffing recipe here!

Stuffing is easily veganized these days. Instead of butter, you can use vegan buttery spread. Instead of sausage, veggie sausage. Andbroth can easily be veggie-based. Let’s face it, the star of the stuffing show is those bread cubes anyways, so the rest is easy.

This mushroom stuffing adds a hearty flavor and texture that really gives this dish depth.

Do you like your stuffing dry and fluffy, a few of those bread cubes, not totally marinated? Some toasty edges and lightness throughout?

Or do you prefer your stuffing thick and heavy, even kinda mushy in a lovely marinated bread sort of way?

I personally think you can get the best of both world with stuffing. The deeper baked stuffing a bit more moist, and the outer edges a bit more dried out. But overall, just make sure you add enough bread if you want a fluffy, bread-y stuffing.

More tips… Eating Well has some great tips for not ruining your stuffing. I like the tips for how to add broth.

Day old or dried out bread cubes work best. If you use soft, fresh bread, the moisture will be increased. You can always modify the veggie broth add-in to suit your breads needs, but when possible get your bread cubes as dry as possible. Tip: Pop them in the oven and bake them before folding them into your stuffing pot. 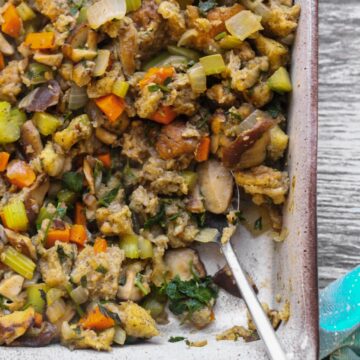 **bread cubes: dries works best for texture. Add more to taste if you like a breadier stuffing.