Home » This and That » My Healthier Versions of Melissa’s Torte and Granita. 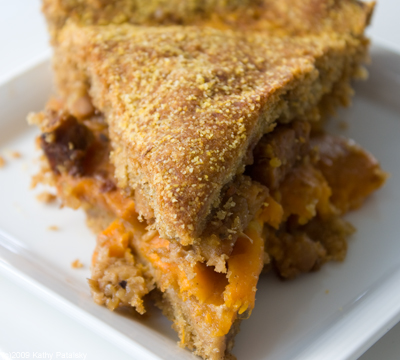 Last Sunday afternoon I watched the premiere episode of Ten Dollar Dinners with Food Network Star winner Melissa d’Arabian. My review of the show was basically that Melissa was awesome and that I’d watch again, but her menu could use a few big-time tweeks on the health-appeal factor. So I decided to step up to the ‘dinner’ plate and give her menu my best shot, but this time using all vegan, healthier-version ingredients. For example, instead of white flour I used spelt. Instead of white potatoes I used sweet potatoes. I substituted the bacon with my crispy tempeh bacon (facon) bits. I even tested out her ‘applesauce granita’ recipe. I must admit that there were more than a few surprises for me during this task. See how it all turned out…

Melissa’s Recipe, My Tweeks. I must admit that as much as I bashed the health value of Melissa’s Bacon-Potato Torte, it wasn’t all bad because clearly it inspired me to try a new recipe of my own. Here is how I tweeked Melissa’s Recipe:

Here is Melissa’s Recipe and my changes:

My ending recipe looks like this, I added in a few ingredients of my own as well…

1) Combine all dry ingredients, slowly add all wet ingredients. If you have a large food processor you will want to pulse the cold buttery spread into the dry ingredients first.
2) Form dough into a ball, split into two portions. Place in freezer while you work on filling ingredients.
3) Peel you potato and slice into thin rounds. Pile in a bowl. Pour maple syrup and lemon juice over slices to marinate. Sprinkle with salt and pepper. Set aside.
4) Over medium heat, simmer the soy milk creamer, vegetable broth, chopped garlic and 3 sprigs of thyme. Let simmer for a few minutes, then turn to low.
5) Retrieve dough and roll out one half. Sprinkle work surface with some flour and thick cornmeal. Place bottom layer of dough in pie pan.
6) Layer the potatoes in the pie pan. Set aside.
7) Saute the tempeh bacon. Recipe for tempeh bacon here. Slice into half-dime sized bits. Saute the bits for a second time using a spritz of olive oil. Bits should be nice and crispy on the outside, but not dried out. Pour hot tempeh bits over top the potatoes.
8) Remove the thyme from the creamer liquid. You can sprinkle a few of the whole leaves of thyme over top the potatoes. Pour the thyme-infused creamer/broth/garlic liquid over the potatoes.
9) Grate the cheese and layer it on top of the tempeh bits and potatoes.
10) Roll out top half of dough. Place on top of pie. 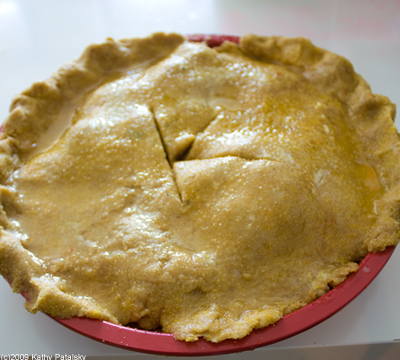 11) Glaze top of dough, slice in steam vents and bake for 45 minutes at 350 degrees. Cover pie with foil for first 30 minutes. Uncover crust for last 15 minutes of baking.

Allow pie to cool for 20 minutes before serving.

Image note: My first test of this recipe did not include the vegan cheese, thus it does not appear in my pie photos. After a taste-test, I found the presentation and taste was much better with the cheese. 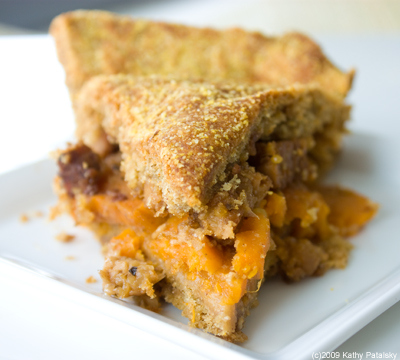 The Surprises: The reason I called this a pie rather than a torte is simply because the sweetness from the potatoes really does take this from a savory dish to a savory-sweet dish. I was pleased with how my first attempt of this recipe turned out, but not overwhelmed. Why? Well I didn’t add in the cheese on my first try. I wanted to try it ultra healthy. But it was bland and a bit too dry. Thus I added the cheese back into the recipe for the posted verison above. Cheesy taste-test: I melted some cheese into a sample slice and it tasted much better. So don’t forget the vegan cheese!!!

*Sweet Potato Pie Version #1: The other idea I had after this first test…mash/puree the sweet potatoes first. Maybe puree the potato with ½ cup of garlic hummus and a handful of fresh parsley. Then layer it into the pie. This would be awesome and I just may try it myself. Yum Yum Yum.

The other surprise…the granita was awesome!…

Applesauce Granita. I also tried Melissa’s applesauce granita with a bit, OK a lot of skepticism. I shaved off my frozen mixture and tasted. Yum!!! Wow, I actually love how this tasted. Who knew that frozen applesauce could taste so god. I did make a few bit tweeks to Melissa’s recipe. Here’s my version:

*Place in a freezable container, stir and place in freezer until hard.

To Serve:
Scrape out frozen sauce granita-style, with a large lemon zester or a fork. Spoon into serving bowls. Top with sauce.

Check out my original review of Melissa’s menu and show here. (You can also check out Melissa’s food network web page here.)

Crust fresh from the oven: 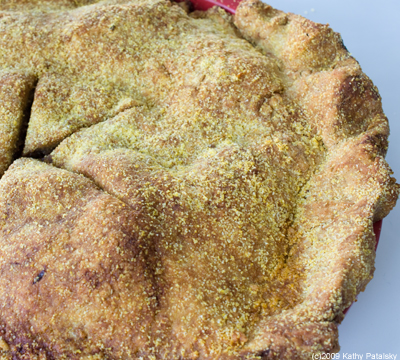