Home » This and That » Recipe: Lemon-Poppyseed Chamomile Tea Bread. Zen. 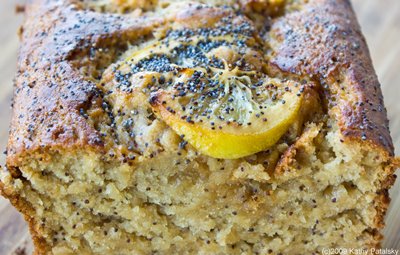 I love chamomile tea at bedtime. I also love lemon-poppyseed bread. So I decided to put these two wonderful treats together and create Lemon-Poppyseed Chamomile Tea Bread. Or Lem-Pop-Cham Bread for short. No matter what it’s called, it’s delicious. It’s a classic recipe gone ZEN.

Sunny Flavors. Calming Effects. Zested lemons. Blue organic poppy seeds. Steeped organic chamomile tea. Whole wheat flour and all natural sweeteners make this bread healthy and divine. Did you know a tablespoon of poppy seeds has 13% your RDA of calcium? Yup. Also, you can use more tea for a deeper soothing chamomile effect.

Click ahead for this ZEN twist on a Lemon-Poppyseed classic… 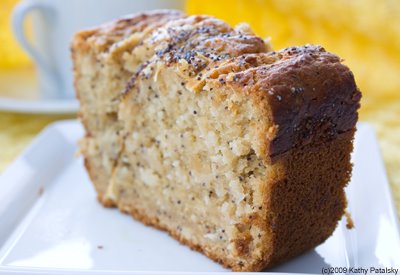 note: add more soy milk if your dough seems a tad too sticky/thick, or if you use a dry sweetener instead of liquid like agave syrup.

Mix briskly with a spoon. Once a creamy batter is attained, pour into greased (or use parchment paper) bread pan.

Bake:
Bake at 350 degrees for forty-five minutes or until a light brown crust forms. Allow to cool for twenty minutes before removing from pan.

Eat warm from the oven, in a few days or store in freezer.

*Makes a soothing and calming bedtime snack since it has chamomile tea in it! You can even add more tea to the batter if you want an ultra-calming bread.