Ok, so the Super Bowl was last weekend. But I am still posting this recipe for all your future nacho-needing events. These best ever Vegan Nachos were perfect for snacking on while watching the game … commercials … or Gaga being amazing. More on Gaga in this post. But nachos are a good idea for just about any TV watching event, so I’m posting them ‘post-super-bowl’ anyways. I mean these could very well be Oscars party nachos, so red carpet ready guys.

These vegan nachos were SO good! Like “omg-why-don’t-I-make-nachos-more-often??” good. And the funny thing about nachos is that if you pile on the veggies, in a strange way they are actually pretty healthy! I mean if you curb your chip munching appetite and focus on those veggies. Plus, DIY the ‘sour cream’ with cashew cream. My trick is to limit my chips and pile on the excess toppings. When crafting your nacho platter, aim for more toppings, less chips and you are good to go.

So the next time you crave a super satisfying, sharable snack, make these!

The best vegan nachos are waiting for you..

GAGA. Side note since I am slightly referencing the Super Bowl in this post. I just want to say how awesome Lady Gaga was! I actually don’t consider myself a huge gaga fan, but I was so impressed with the energy and spirit she brought to the performance! So good! And I was totally annoyed when people actually started tweeting negative things about her body during the show. I mean, seriously? What the heck? This girl is in amazing shape, thirty years old and continues to bring so much creativity and art to her performances and life.

She killed it, ’nuff said. Clappy hands emoji to you Gaga.

And anyone who wants to tweet about someone’s amazing body and call it something else, is basically, well, an idiot. It is no wonder our society has such an awful relationship with self esteem and positive, er, negative body image.

I don’t want to give the negativity more time than it deserves, but I just get really mad when someone amazing gets judged by their looks or body. And especially if they are literally in amazing shape. Ack. So frustrating. Society. Stop.

But anywayssssssssss. Back to the nachos. 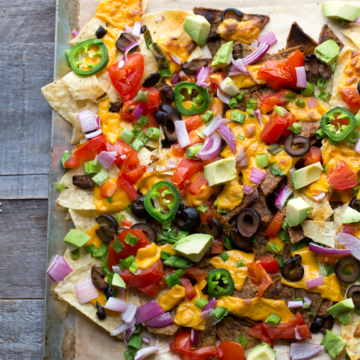 *nutritional info does not include optional DIY sour cream