Home » This and That » Vegan Wasabi Slaw 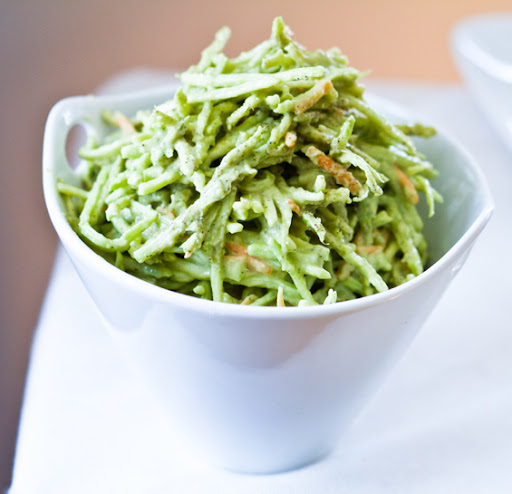 When I first set out to make this creamy Vegan Wasabi Slaw – I wanted something extra spicy – with a wasabi kick to make you shake your fists in the air until the shock of heat passed. Kinda like when you get a mouthful of wasabi on your vegan sushi roll. Needless to say, I love wasabi.

But this construction of this slaw didn’t turn out exactly how I had planned..

Once I started playing around with this recipe, I realized that wasabi is a tricky, temperamental ingredient. It likes to stay pure. Singular. Bright. Simply piling in spoonfuls of wasabi wouldn’t really increase the heat – it just throws the flavors out of sync. So mellow and light is how the wasabi had to stay.

And since I wanted a “creamy dressing” for my slaw I knew the moody wasabi would put up a fight against my heavy ingredients like silken tofu. It was a battle at the Vitamix, but after several tweaks to this recipe, I came out very satisfied.

Instead of a bold, spicy slaw – this recipe is actually quite mellow. The awesome creaminess of the dressing slowly overpowers any sharp wasabi taste. And rather, the wasabi “kick” is slow, mellow and understated – but definitely still there.

So even though this recipe didn’t turn out exactly as I had planned – I am still loving the result: a super crunchy, refreshing, vibrant slaw with a creamy wasabi kick.

I chose to use Brocco Slaw and Matchstick Carrots instead of cabbage because it has a heartier texture that really stands up the the heavy, silken tofu wasabi dressing. You could try using cabbage, but I’d only use half the wasabi dressing.

How to Serve? Aside form eating in a big bowl as is, this slaw would be delish piled in a wrap or on a veggie burger. This slaw would pair perfectly with a few tofu skewers or sizzling hot pepper tempeh sticks. That hot and cold combo would be killer. 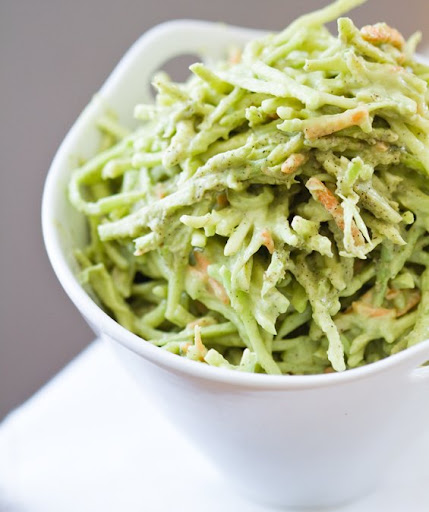 1. Add all the dressing ingredients to your Vitamix or blender. Blend until smooth. Taste test the dressing – you can add more/less of certain ingredients if you’d like. Salt to taste if needed.

2. Add your slaw ingredients to a large mixing bowl.

4. Serve right away – this salad will get slightly soggy when left overnight. But even “soggy” it’s delicious in wraps!

If you want more heat (like I did) – instead of adding spoonfuls upon spoonfuls of the wasabi powder into the dressing – try this: drizzle some simple wasabi paste and soy sauce right over the slaw before you eat it. Or you can make a side dish of wasabi/soy dipping sauce – just as you would for sushi. Or add in a ½ teaspoon of cayenne to the dressing blend. 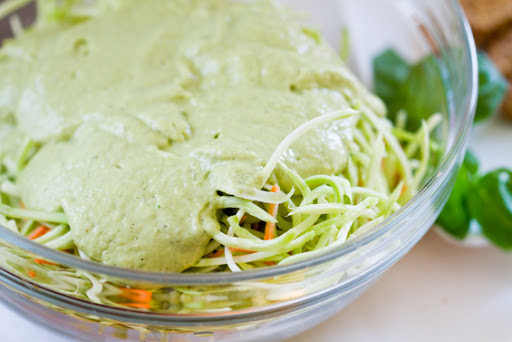 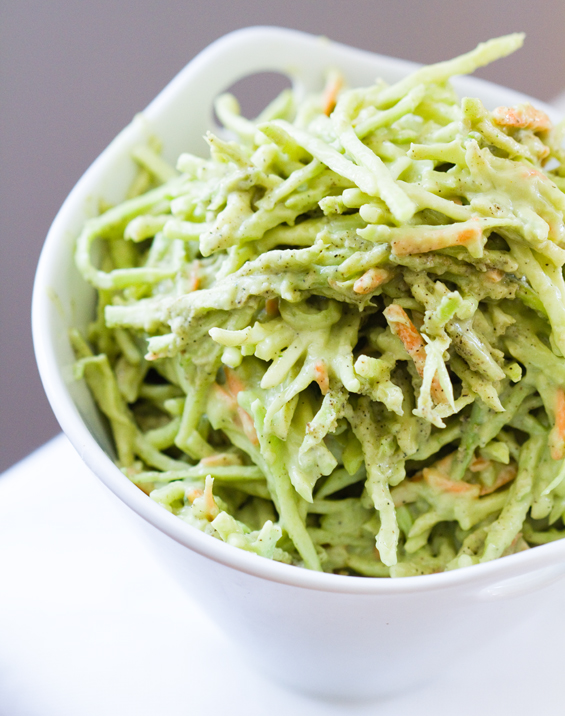