Home » This and That » Winter Travel, by Train: NYC to DC and Back, in Under Ten Hours. 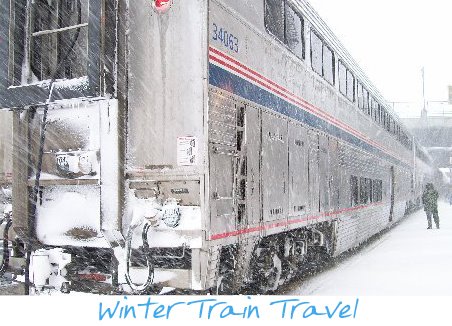 In the winter, travel by train.
In the summer, travel by convertible.
-Kathy, (These are my two laws of land travel.)

I recently took a day business trip to Washington DC. I was back in New York in under ten hours. Really. I thought my quick trip would be stressful, sleepless and horrible. But I enjoyed it. A lot.

Read more for my “NYC to DC and back again, in ten hours, story.”

Kathy’s Story: NYC to DC and back again, in ten hours

I had to travel down to Washington DC for business. I wanted to be back to New York in time for dinner. And since the Presidential Inauguration is next week, I knew I had to get my one-day trip done before the DC chaos hit. My appointment being at 10am, I decided to take the 5:30am train. Wake time: 4 AM. Mind you, I usually wake up around 9:30 AM.
I arrived at PENN Station at around 5 AM. The cold and empty hall where the Amtrak passengers gather was unusually calm. Classical music was playing on the loudspeaker, and the PENN announcer was reminding everyone that:
“unticketed passengers will be asked to leave the station waiting area.”
She was of course talking to the homeless people, aka bums, sleeping in PENN Station. Smart bums. It was around nineteen degrees outside that morning.

One by one passengers began to arrive. All a bit groggy and half-asleep. Some wore large puffy winter coats and hats. Some men were dressed in tightly tailored business suits and charcoal black polished shoes. I could hear some ladies wearing loud clanking high heels, as they paraded down the main hallway. Roller-luggage grinding down the hall in tow. Many people were carrying scruffy Styrofoam cups of coffee. Clearly not from Starbucks, a s there isn’t one near the Amtrak part of the station. Which sucks. Checking their blackberries. Out of habit, I’m sure. Who else is up at this hour?

If you have never boarded an Amtrak train from PENN station, you should put it on your life’s to-do list. While the Amtrak station is old and dingy at best, it is all about the all-knowing, ticker board. All the passengers gather in a giant hall with different tunnels marked by numbers-off the the sides. There is only one large ticker board hanging in the center. On it, is the trains, times, and then a few minutes before the train is scheduled to leave, the tickers will flip and the tunnel number you are to board at will appear. The board looks like it is from the twenties, or fifties. I don’t know. But it’s pretty old. Sometimes, when the number flips, there is a rush of people running to the tunnel. Many are seeking that perfect window seat. Or perhaps that coveted upper storage area for their luggage. Or maybe they just think the train will leave without them. It won’t.

The train before mine was a 5 AM train bound for Newark New Jersey. I saw a long line of groggy pedestrians head for their tunnel and I was very glad that

Newark was not my final destination. Sorry Newark.

I leaned up against a cool tiled wall, checking my text messages and updating my facebook status with posts like “Kathy is shocked that this many people drink coffee at 5 AM.” and “Kathy is about to board a 5:30 AM train to DC.” Finally my train tunnel number flipped. I heard that nice classic ticking sound with each fast flip of the board. I walked quickly to my tunnel as the short line began to form. Most of the DC bound passengers were nicely dressed. Business travel. It was a Tuesday…

I walked down the icy outdoor train runway and boarded the train. I was in the car right after the Cafe Car, so the smell of coffee, store-packaged blueberry muffins and biscuit foil-hugged breakfast sandwiches wafted down the aisle. I got a window seat and hoped that no one would sit next to me. (I think we all hope that at 5:30 AM in the morning.)

“All Aboard!” the train conductor shouted and we departed NYC, bound for the lovely Union Station in Washington DC. I placed my ticket in my lap, and closed my tired eyes, waiting for the ticket guy to clip my ticket. Eavesdropping on the passengers in front of me saying their “Hello. Good Morning.” greetings to the ticket guy, I could audibly survey the crowd. A few business guys, an older woman. A travelling woman who had her seat all the way back even before I got on the train, I’m guessing. A touristy looking man who was incredibly spry and cheerful for 5AM. “Good Morning!” he shouted.

My ticket was clipped and I was free. Free to close my eyes and sleep.

But it is never a real deep snoozing-all-the-way-to DC sleep. It is an intoxicating, hush-pumping of the train, shushing sounds, rocking back-and-fourth, listening to random passengers conversations, looking out the window and closing your eyes again kind of sleep. I love it.

I heard at least three groups of men, all daily commuters. Many who got on at the Philly stop, all networking and telling travel stories. “Yeah, I do this everyday.” one man said.
“Wow! I go down on Tuesday and come back on Thursday.” another man replied.
“Ha-huh Yeah, I uh, have a wife who requires me home.” The first man chuckled.

Then in front of me was a college grad chatting with an old-timer in a similar industry. The banter back and fourth was highly entertaining. The young newbie bragging about his world travels, his upcoming plans to hop around Barcelona and maybe France. He had already spent two summers in South America. The old-timer was impressed, saying “Ya know, that kind of thing is better than a crummy old summer internship at a company. Sometimes ya know?” I didn’t hear the reply, and I sighed and closed my eyes for another fifteen minute train nap.

I woke up drooling. But it was starting to get lighter outside, so I knew we were close. The outside of my window was littered with breaking black trees, crusty white dusted forest-brush and tiny quiet houses with puffy white streams of chimney smoke gushing from the rooftops.

Finally. We arrived in DC. I was so cozy on the train, I had to do a few stretches and deep breaths to wake myself up.

My favorite part about Union Station in DC is the fact that it is right across the street from the Capitol Building. (My favorite building in DC). Maybe even the world. The Tour de Eiffel being my favorite monument. Those twinkly night lights…who can resist.

So I did my business errands, and surprisingly was done by 10:45 AM. I actually made the departing 11:02 AM train back to PENN station. Wow, right?

My return trip was just as calm-inducing and peaceful. I finally got to eat my strawberry-peach vegan muffin that I had stuffed into the bottom of my bag at 4:30 AM that morning. I ate my muffin, and with a happier tummy, I took a nice long groggy awake-asleep nap on the train home. I was in the back row. No one sat by my the entire return route. Ahhh… Nice.

In closing, that is my train travel story. I was reminded about how peaceful travelling by train can be-in winter especially. If I had been travelling by car, I would be alone-the dry heater blasting in my face-and there would be no light chugging of the train to let me rest. And when the weather is this cold and gloomy, we all need a good soft, woke-up-way-to-early-that-morning, morning-time nap.

I highly recommend that you take a train trip this winter. Do it for the train ride, and not the destination.

I believe that is a theory to life..enjoy the ride and not just the destination? Well the same is true for the train. If nothing else, you will get a good few hours of no-TV, no-Internet, turn off your cellphone calm.

Where else can you get that nowadays?

Planes vs. Trains
Oh, and PS. Yes a plane will get you there faster, but my gosh if you have a few hours to spare. Take the train. Planes are fast, loud, uncomfortable and you can’t even rest with all the lack of leg room and grinding engines stress. Choose those larger-than-you-remember seats on a train. The cushions are squishy and the leg room is plentiful. And isn’t that all you need when traveling anyways?

Tip: Bring your own muffin…