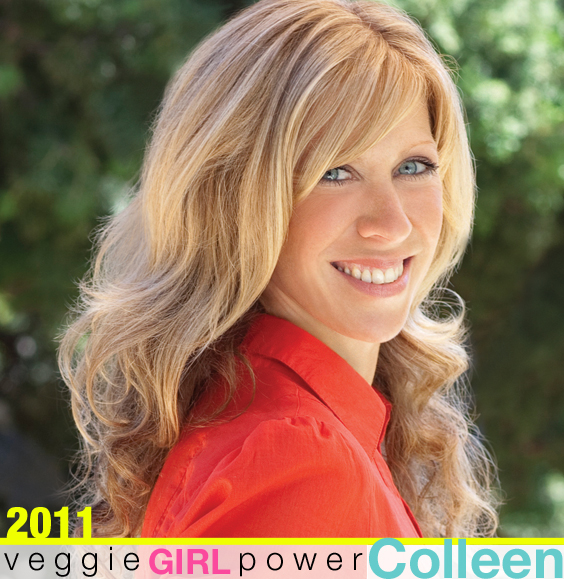 Colleen is the award-winning author of five fabulous books, including the bestselling The Joy of Vegan Baking, The Vegan Table, Color Me Vegan, and Vegan’s Daily Companion, and her latest (released Aug 2011) The 30-Day Vegan Challenge, published by Random House. Colleen’s books are brimming with inspiring recipes and words of wisdom.

Colleen also contributes to National Public Radio and The Christian Science Monitor, and has appeared on The Food Network and PBS.

But what really draws me to Colleen as a Veggie Girl Power superstar is her sunny disposition and warm heart. She is the type of person who you would simply love to sit down and chat with for hours about anything and everything. Food, family, nutrition, life, silly stories and sad ones too.

Colleen has a sparkle that is contagious. I call it “The V Factor” – kind of like the veggie version of Simon Cowell’s “X Factor.” Colleen has that something special that radiates from her soul and touches you. Her veggie glow makes you want to be a better, prouder, louder, kinder vegan – and person.

Colleen: Tea, I always start my day with a freshly brewed pot of my favorite green or oolong tea. It soothes me as I start my day. I’ve never had a cup of coffee in my life, as tea (next to water) has always been my beverage of choice.

Colleen: Honestly, I’m inspired every day by how open people are. The people who find my work with an open heart whose minds and lives become transformed as a result are my inspiration. They’re the ones who give me hope each day and compel me to continue my work. The animals are also my inspiration, as they have so much to teach us about how to live in the present, how to forgive, and how to be just who we are. (My prayer for humans on behalf of the animals talks about this.)

Colleen: Honestly, my transition was pretty effortless. As soon as I made the connection between the violence I was contributing to by consuming animal’s milk, chicken’s eggs, and animal’s flesh, nothing that contained these things was appealing to me at all. I think the hardest part though – which is why I wrote The 30-Day Vegan Challenge – were the social aspects, the barrage of questions, the stream of myths I had to respond to, and the hostility with which some people responded to my being vegan. Now I understand what was going on then, and I can tell every single person who experiences this same thing to just hang on, because I guarantee it gets better as you remain true to what you believe in.

Colleen: I say that as soon as I realized I was paying people to be violent and desensitized, I didn’t want any part of it. I say that once I realized that no matter what an animal is bred and killed for – whether for their flesh, milk, or eggs – or how they’re bred and killed, you cannot escape the violence of slaughter, and I wanted no part of it. I became vegan so that my every day actions would be consistent with the compassion I already felt for people and animals.

Colleen: Well, just that: that my most fervent hope is that our daily choices be a reflection of our deepest values of compassion. I always say that I’m not asking people to live according to my values but that I’m urging people to live according to their own. I believe the problems we have in this world aren’t because we have so much compassion we don’t know what to do with it; the problems we have in this world are because people aren’t manifesting who they truly are. Most people are opposed to violence and cruelty, but most people aren’t reflecting that in their choices. My message is one that raises the bar and calls on people to do just that – to reflect their deepest values in their daily choices.

Colleen: That the word “meat” originally meant that which was eaten to distinguish it from that which was drunk. The word mete originally meant solid food versus a beverage, and we still use it today when we say “coconut meat” or “nut meat.” I encourage vegans and vegetarians to take back the word and say “grain-based meat” or “nut-based meat” or “vegetarian or vegan meat” rather than fake, faux, alternative, substitute, or analog. Those words make “vegan food” sound so unappetizing, and they also make it seem like animal flesh and secretions are the barometers by which we should measure everything else. Not so.

Colleen: I’m a bit of a kale junky, so my absolute favorite snack is kale chips. They’re especially good as I grow my own kale in my back yard and can pick it fresh every day. However, I’m also a chocolate and peanut butter nut, so it’s not uncommon that you’ll find me sporting a little bowl of chips and peanut butter (when I want something more decadent!).

Colleen: Don’t do nothing because you can’t do everything. Do something. Anything.

Colleen: Criticism is inevitable and can actually be a very constructive thing if we use it as an opportunity to learn and grow. If it’s negative, I consciously remind myself that how people react to me speaking my truth is their problem, not mine. My approach is to simply give people the information and facts and let them do with the information what they want. Most people make compassionate choices after they have the information. I’m a huge believer in planting seeds and remaining unattached to the outcome. There’s so much misinformation out there, and all we can do is speak the truth and trust that that prevails over everything else.

Colleen: Since I’ve already talked about kale as my favorite “vegan” ingredient, my favorite vegan product that I couldn’t live without would have to be 100% Pure’s Organic Coffee Bean Eye Cream. Even though I’ve never had coffee, I love the scent, and this moisturizer is out of this world!

Check out the schedule for this year’s VGP series! Six more ladies to come!!