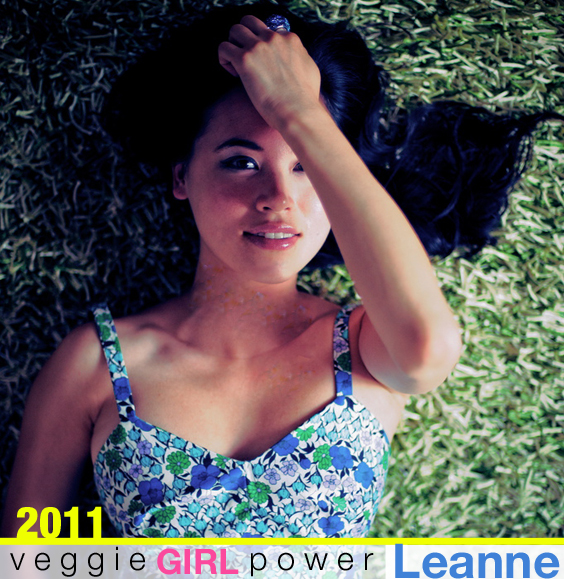 Next up in my 2011 Veggie Girl Power Interview Series is the talented young model-turn-vegan fashion designer Leanne Mai-ly Hilgart. Leanne founded the 100% vegan fashion line Vaute Couture in 2009. Meet Leanne and see how easy it is to be a vegan fashionista (aka, a compassionista)..

Leanne is a veggie superstar. She was named 1 of 7 Best Emerging Green Designers of 2009 by Ecoturre – one of “20 Under 30” by VegNews – and awarded by the Asian American Leadership Council for “Breaking Barriers in Green.”

But above all the accolades stands Leanne’s straight up creativity, vision and eye for creating fashion that is vibrant, fun, alluring, modern. Vaute oozes with “the cool factor.” Watch out Michael Kors.

Leanne’s inspiring business persona is matched by her compassionate heart, sweetness and warm personality. My kind of fashion designer (and person!) A few of Leanne’s designs (photos via Vaute Couture’s online store): 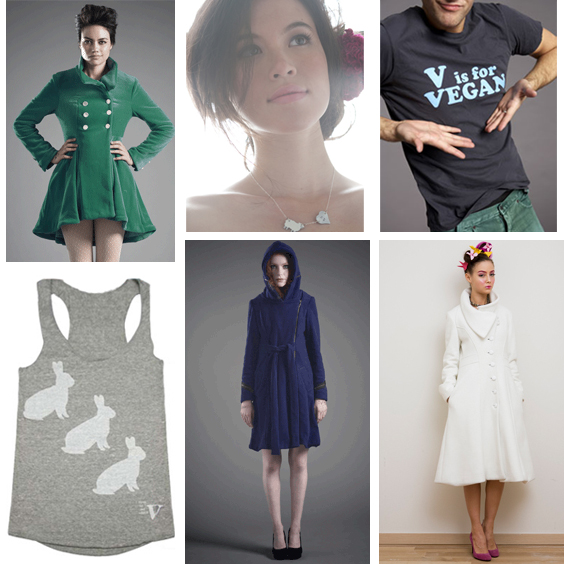 Leanne’s adventure into vegan fashion began when she was faced with a common problem among vegans – cold harsh winters and simply nothing (vegan) to wear! Traditional winter coats are plagued with being a mish mash of animal products. From leather to wool and even the unimaginably cruel material of animal fur.

But Leanne didn’t wallow in her grief, she took action. And in 2009 (after much research into fabrics) she launched a Limited collection of her Vaute line – to rave reviews. Celebs like Alicia Silverstone and Emily Deschanel were gushing over Leanne’s designs.

From sweet bunny tanks to plush winter coats, and even a new accessories line – Leanne’s fashion is simply gorgeous. And even better, 100% cruelty free.

Behind the Vaute: Vaute Couture is spelled for “Haute” couture, but with a “V” for vegan. And pronounced like “vote.”

And OK, there is one big problem with Leanne’s fashion line…. it sells out quickly!! If you want to score one of Leanne’s fall coats, be sure to order online early on in the year. Pre-ordering is highly advised. (Be sure to see Upcoming Project News direct from Leanne at the end of the interview below! Did she just say, flagship boutique? Yes!)

Leanne: Depending on the time of year, I either do a bowl of Peanut Butter Puffins with blueberries, matcha green tea powder, and coconut or soy milk, or my latest obsession is a Beet Smoothie with soymilk, kale, blueberries, and mango.

Leanne: Reading “Business as Unusual” by Anita Roddick, the founder of the Body Shop, inspired me as I was starting to see business as an amazing vehicle for activism. The Manifesta piece in Eve Ensler’s play “Emotional Creature: the Secret Life of Girls” which says: “Decide if fitting in is more important than finding out what you’re doing here.” Ellen Degeneres. Light. Strangers helping each other out. and being in an orchestra (which I miss dearly!) where everyone is playing their part, all towards a collaborative singular experience.

Leanne: My first year vegan was spent in the most non-veg friendly town I’ve lived in: West Lafayette, IN where I was in school at Purdue University, a very large Ag school in the middle of cornfields. When we, the AR group, did Meatouts on campus, people were scared to try a veggie burger, certain it’d taste like cardboard. Eating vegan on campus (besides veggie burgers and fries) wasn’t the easiest thing so I sought out the local health food store (which my friends in the AR group worked at), and my mom would send vegan foods in care packages. Other kids on campus got homemade cookies, I got little cases of sweet red bean from our local Asian supermarket. When I transferred to DePaul in Chicago we had a little part of the food court dedicated to vegan food, and now that I live in NYC, I (nicely!) scoff when people here suggest eating vegan is difficult.

Leanne: I went vegetarian when I was ten and did my Social Studies fair project on Factory Farming, Vivisection, and the Fur Industry. I went vegan 8 years later when I realized that the dairy and veal industries are one in the same, if veal is the first thing off my list, how could I eat dairy? Once you know what goes on behind foods, you can never look at them the same.

Leanne: Vegan is a choice of empowerment, to think of others (despite species) in your daily life is strength, not sacrifice.

Leanne: Since I’m from the Midwest, I’m a comfort food girl — love making Grilled PB&J with a tall glass of ice cold soy milk. I was bummed and jealous when my college roomies made their Grilled Cheese’s before there was Daiya, so I started making grilled PB&J, which melts the peanut butter to a really extra yummy consistency.

Leanne: I once wrote this in chalk all over my magenta chalkboard office wall so I could stare at it everyday as I was starting Vaute Couture, it helped me get over second guessing myself and realize that action itself is most of the battle:

“Do your best to pick a direction (hopefully an unusual one, hopefully one you have resources to complete, hopefully one you can do authentically and hopefully one you enjoy) and then do it. Loudly. With patience and passion. No flitting, no waiting for proof. Just consistent, overwhelming performance in pursuit of a vision you believe in. That’s far more important than which direction you chose in the first place.” ~ Seth Godin

Leanne: I just try to focus on what most people have in common, that we all want to try to make the world a better place and consider ourselves as kind individuals who want to lessen the suffering of others. People get critical usually when they are defensive or feel they’re being judged (even when they aren’t), but since most vegans at one time were not vegan, I like to approach them from the standpoint of someone who might realize that a vegan lifestyle fits their morals and isn’t as hard as they think.

Leanne: Matcha green tea powder, it’s my favorite flavor and feels so darn good at once (especially if I’m feeling s-l-o-w that day). I make matcha smoothies, cereal (see #1), cupcakes, and of course, lattes. I also love some junky vegan food – like Tofurkey Pepperoni pizzas, Temptation Vegan Cookie Dough Ice Cream, and Sweet & Sara S’mores. As far as products go – I’m crazy for everything from Alba as well as the scents from Terranova, their Sakura & Green Tea and Shea Blossom perfume essence are the only scents I wear.

Upcoming Project News for Vaute Couture direct from Leanne!..
We are just finishing NYC production of our 3rd collection of winter coats that are at once vegan, stylish, and warm enough for a real winter, using high tech custom made vegan & eco conscious fabrics.

We just launched our new accessories: colorful earmuffs & hand-knit headbands and hats. I’m currently on my North American Pop UP shop Tour which included the West Coast (San Francisco, LA and Portland), NYC, and DC, and will include Chicago (Nov 5-6), and Toronto & Montreal in mid December, as well as Holiday shops in NYC and DC.

I’m looking at opening our first flagship boutique in NYC this year. Also, every year I fund production with a pre-order discount, so those who order early get a big discount and first pick at the new styles and colors before they sell out. If your favorite is already soldout this year, sign up on the newsletter here (www.vautecouture.com/index.htm) to be ready next year!

Check out all the interviews in this year’s VGP series! Five more ladies to come.