These Santa Cruz Beach Burritos remind me of being a teenager, grabbing a burrito with my friends on the way to or from the beach. The secret to these burritos is that they celebrate simplicity – nothing too fancy with seasonings. Salt, lime, maybe a few fajita spices for the grains and really letting the textures and flavors of the plant ingredients shine through.

The other secret to these burritos: cilantro. The way I add cilantro to these burritos is unique and it is my favorite signature thing about this recipe. So who is up for a vegan burrito night?

If you want to add vegan seitan strips, go for it..

Grab one of these and dinner is done. (Ps. I add plentiful amounts of Cholula hot sauce or a spicy salsa as I eat…)

Then you can plop on the couch after a very satisfying summer meal.. (This is Sochi’s ‘tired’ face even when he just napped all day. He was doing this while I was cooking + photoshooting + working. #Kitties..)

The inspiration from these burritos is from a tiny hole-in-the-wall Mexican restaurant that my friends and I used to go to. I cannot remember the name of it and it has since been replaced with something else, but while it was there, a few blocks from the ocean, it thrived! It could fit about four small tables inside and had a bunch of picnic tables scattered all around the back. Or you just grabbed your meal to go and ate it in the car or brought it home. It was across from the Seabright Brewery (I think .. this was twenty years ago…). So if anyone knows the name, feel free to comment!

Another spot that inspired my with an epic Vegetarian Burrito was a spot called Sofia’s Taqueria. We went there soooooo many times I could not even count. Probably once a week. The veggie burrito was giant and had loads of crunchy cabbage and giant, tender pinto beans. I remember, as a kid, it was one of the first times I felt really cool ordering the vegetarian option on the menu.

For me, the secret ingredient was the cilantro! It was finely chopped up (leaves AND stems) and large amounts of it were placed in the burrito, just as you might add lettuce to a wrap. The Santa Crus Beach Burritos I remember had copious amounts of fluffy, green cilantro leaves and crunchy green cilantro stems.

The cilantro gives a lightning effect to this burrito. Chopped cabbage could do that too. I always felt just right after eating a big one of these cilantro-packed burritos and a side of guac and chips for dinner.

Cilantro has a weird reputation. I think that is because some people don’t like it, aka hate it. “It tastes like soap.” I have heard cilantro-hating people say. While others (like me) think it tastes dreamy and fragrant and is the perfect aromatic accent to spicy salsas, rich guacamole and hearty beans and rice. I literally cannot get enough cilantro in my Mexican meals. So this trick is perfect for me. Lots and lots of it!

Cilantro vs Coriander. A fun fact about what Americans call ‘cilantro.’ So here in the US we call the leaves and stalks of the plant ‘cilantro’ and the seeds, coriander seeds. While in the UK they call everything coriander and the word cilantro doesn’t exist. In India they call it “dhania.”

As a leafy green herb, cilantro is naturally quite good for you. It contains antioxidants, most notably vitamins A and C) and fiber.

Economical Greens. The great thing about this recipe is that you get to buy a big bunch of cilantro, and actually use up the entire bunch (stalks and leaves) as your ‘leafy green’ filling for your burrito. And cilantro tends to be reasonably priced. Economical way to add a dark leafy green herb to your meal.

Cabbage? I love adding cabbage as another veggie. But that is totally optional. The cilantro alone, should do the trick!

“I hate cilantro, now what?” If you are not into cilantro, you can omit it and still make these simple and fresh-tasting burritos. I would sub with cabbage or some diced tomatoes or maybe even just some shredded spinach or romaine. If you want something with a more fragrant aroma, you could try flat leaf parsley.

How to Warm a Tortilla

I place my tortillas over an open gas burner flame for a few seconds on each side, until blackened bubbles for along the edges. (Use extreme caution if warming your tortillas over a gas flame!) Alternative method: warm tortillas in a skillet over medium heat until warm to touch. OR simply pop them in a microwave for about ten to twenty seconds.

Chop as fine as you want. The stems get nice and crunchy while the leaves stay fluffy. Chop the leaves very well to release all that fragrant cilantro aroma. For the stems, don’t over-chop or make them mushy. A quick mincing should do it.

Fluffy fluffy shredded green cabbage adds such lovely light crunch to any burrito, taco or burrito bowl. I think it is a very underrated veggie to add to salads to give some crunch!

Those are my Santa Cruz Beach Burritos. I hope you love making this simple and healthy meal as much as I do! Let me know if you love the cilantro stems trick! 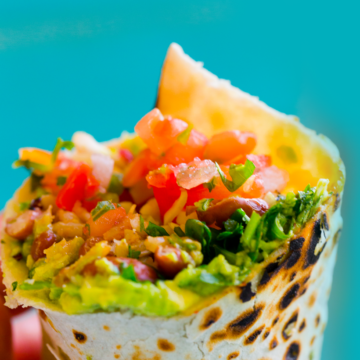 Rainbow Sangria is always a good idea too..